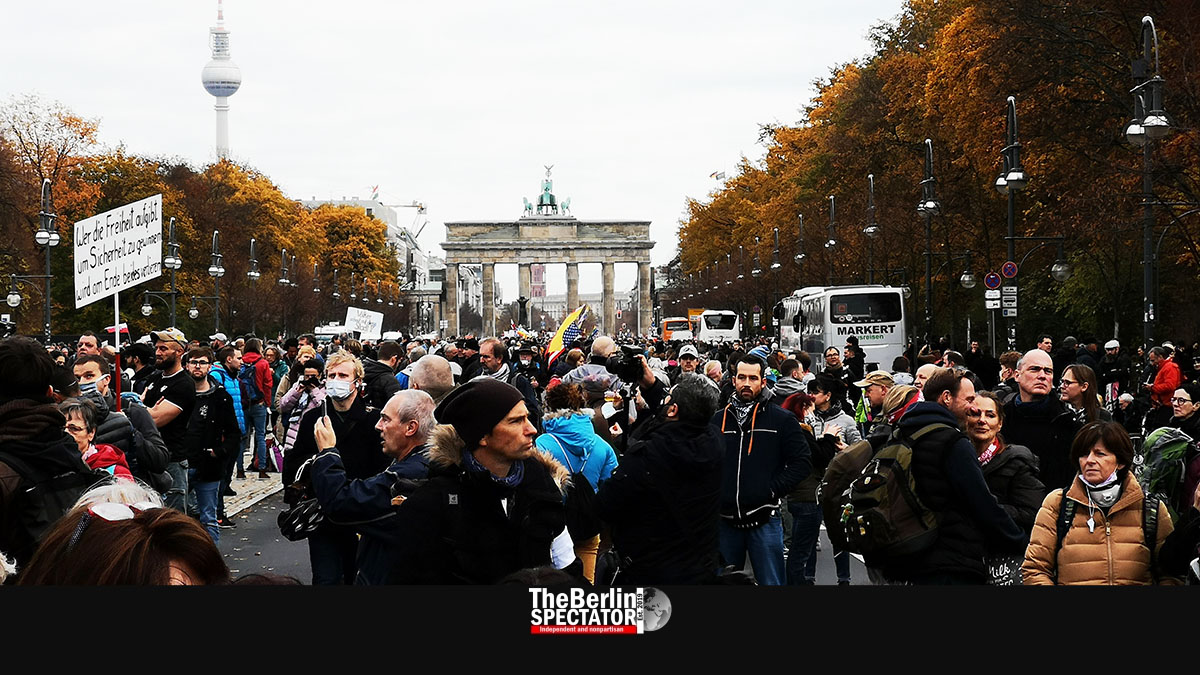 At Brandenburg Gate in Berlin, police watered protesters who refrained from leaving the scene in spite of being ordered to do so. Before, most demonstrators had refused to wear masks.

Berlin, November 18th, 2020, update November 19th, 2020, 5:50 p.m. (The Berlin Spectator) — Thousands were part of a protest against additions to the German Infection Protection Act and against the Corona restrictions in Berlin on Wednesday. Corona deniers and extremist right-wingers were among the participants most of whom did not wear masks and refused to keep their distance.

The demonstrators were watered, meaning they were not hit by strong water jets at first because children were among the protesters. But the situation escalated anyway. Protesters threw bottles, stones and other objects at officers, 77 of whom were injured. As many as 365 arrests were made, the police say. It was not the first time Corona deniers and right-wing radicals took to the streets in Berlin together. These kinds of protests started in March and have grown substantially since.

Police from All Over Germany

Originally, the organizers had intended to stage today’s protest right in front of the Reichstag building which accommodates the Berlin Bundestag. For that reason police have blocked the premises since last night. A police spokesman on site told The Berlin Spectator, more than 2,000 officers were part of the operation today.

Apart from the Berlin Police, they included 600 policewomen and policemen from Bavaria, Saxony and other federal states as well as the Federal Police. There were officers in helicopters, boats, on horses and on the ground, all over the place. Protecting the Bundestag, the Bundesrat, the Chancellery and the city from the protesters and keeping the event under control was their task. Even before the police ended the rally, arrests were made.

In the morning, the first demonstrators came to Brandenburg Gate before 8:00 a.m.. Over time, the crowd grew to 7,000 people, according to the police. They protested against a “Corona dictatorship” and a “compulsory vaccination”, none of which exists. Some disputed the existence of the Federal Republic of Germany.

The addition to the Infection Protection Act, which Chancellor Angela Merkel’s government coalition got through both the Bundestag and the Bundesrat today, as planned, was criticized by the protesters too. They said it contained mandatory vaccinations.

What the addition to the law actually says is that everyone in Germany has the right to be vaccinated against COVID-19 for free, no matter whether he or she has a health insurance or not. Being insured is mandatory in Germany. Persons who cannot afford health insurance fees will be supported by the state.

At the Bundestag, Germany’s Health Minister Jens Spahn defended the addition to the law while the events at the protest unfolded just around the corner. He told the MPs of the extremist right-wing party ‘AfD’ to stop saying there would be mandatory vaccinations. Other MPs slammed the ‘AfD’ for asking protesters to block the entry to the Bundestag. Wolfgang Schäuble, the parliament’s President, ordered the ‘AfD’ faction to remove posters which showed a crossed out copy of the constitution.

Once police had finally managed to make the former protesters leave the area around Brandenburg Gate, some 500 participants turned up in front of Bellevue Palace, where President Frank-Walter Steinmeier is based. He was supposed to sign the Infection Protection Act with its new addition this evening.

A separate incident at the Bundestag took place. The ‘taz’ daily reported, ‘AfD’ MPs had given Corona deniers access to the building, where they had harassed Commerce Minister Peter Altmeier, MPs and staffers. The Bundestag’s own police is on the case. So Schäuble.