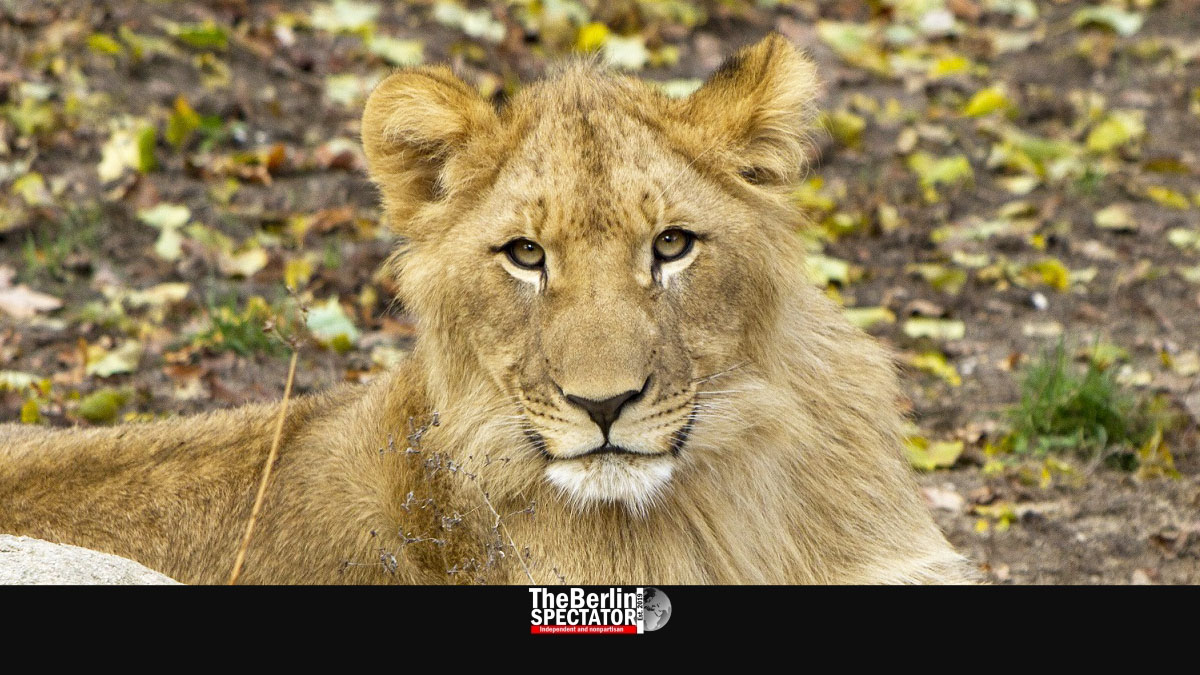 Berlin has two zoos, Tierpark Berlin and Zoo Berlin. For years, the latter zoo has not had any lions. They just returned.

Berlin, November 20th, 2020 (The Berlin Spectator) —  Three African lions are settling in at Zoo Berlin these days, after they were moved to the German capital. Elsa, Hanna and Mateo, two girls and a boy, were born in Leipzig on December 25th and 26th of last year. In order to be the true queens and king of the jungle, or of the Zoo, the three little lions will have to grow up first.

All three of them are beautiful and cute. The size of their paws already shows they will be rather big cats. Since they were just moved in from Zoo Leipzig, they are exploring Zoo Berlin’s new lion house right now. Within a few days, the two lionesses and one lion will be allowed to conquer their outdoor area as well. Towards the end of November, human zoo visitors are supposed to be able to see the three beautiful siblings.

Because the area for feline predators was rebuilt, Zoo Berlin had to celebrate its 175th anniversary without lions, tigers and panthers last year. That is why it was Zoo Berlin: Where Lions and Tigers are Not Being Fed (separate article) for quite a while. Corona and other issues caused several construction delays.

Once Hanna, Elsa and Mateo go outside, they will find an area that is supposed to resemble nature in Africa. Except the caves down there are not heated. At Zoo Berlin, they are. Getting through the Berlin winter, which is usually harmless, should not be a problem for the three Leipzigers. They also have several climbing opportunities. And in case it gets really cold in Berlin’s Charlottenburg district, they can still chicken out by going inside.

Big plans had been implemented and many hurdles had been taken, the Director of both zoos in Berlin, Andreas Knieriem, stated. He conceded that the year 2020 had put the zoos to the test. “All the more we are glad that visitors will be able to see lions again, after a long time.” The new facilities for feline predators at Zoo Berlin provided more room and were closer to nature, Knieriem said.

Other Features on The Berlin Spectator

In summer, two amur tigers moved into the new feline predator area. Zoo Berlin just announced that, sadly, one of them, Aurora, had to be put to sleep because of a several illness that made her suffer. Aurora was 11 years old.

Soon, the one tiger and three lions will have more flat mates. Persian leopards and jaguars are supposed to move in soon. But, even before the new areas for feline predators were finished, there was a lot to see at Zoo Berlin, located right in the German capital’s western city center. It is easy to get to Zoo Berlin, but hard to get out of there because of all the nice animals they have.

The best part of them all is that Zoo Berlin and Tierpark, both Berlin zoos, are actually open, while everything else is closed. During the ongoing partial Corona lockdown, restaurants are closed. They are allowed to sell takeout food only. Café, clubs, pubs, museums, galleries, operas, concert halls and theaters are closed. Everything is. On top of it all, people are supposed to refrain from taking daytrips or other journeys.

What this means is that, apart from taking walks, engaging in solo sports activities or shopping, going to the two zoo is really the only thing families can do in Berlin. The aquariums and other indoor facilities are closed though. Corona rules apply. So does this ground rule: Do not get eaten by the lions, even though they are at the top of the food chain.

Even though Berlin’s zoos are the only touristic facilities that are open right now, there are very few visitors. A spokesperson told The Berlin Spectator, they had 90 percent less visitors right now, compared to last year, also because there were no tourists in Berlin. Running both zoos costs 140,000 Euro (165,991 U.S. Dollars or 124,993 Pounds Sterling) per day. It is a lot of money that does not come in.

Related feature: Zoo Berlin: Where Lions and Tigers are Not Being Fed

Zoo Berlin’s website with information in English can be reached here.