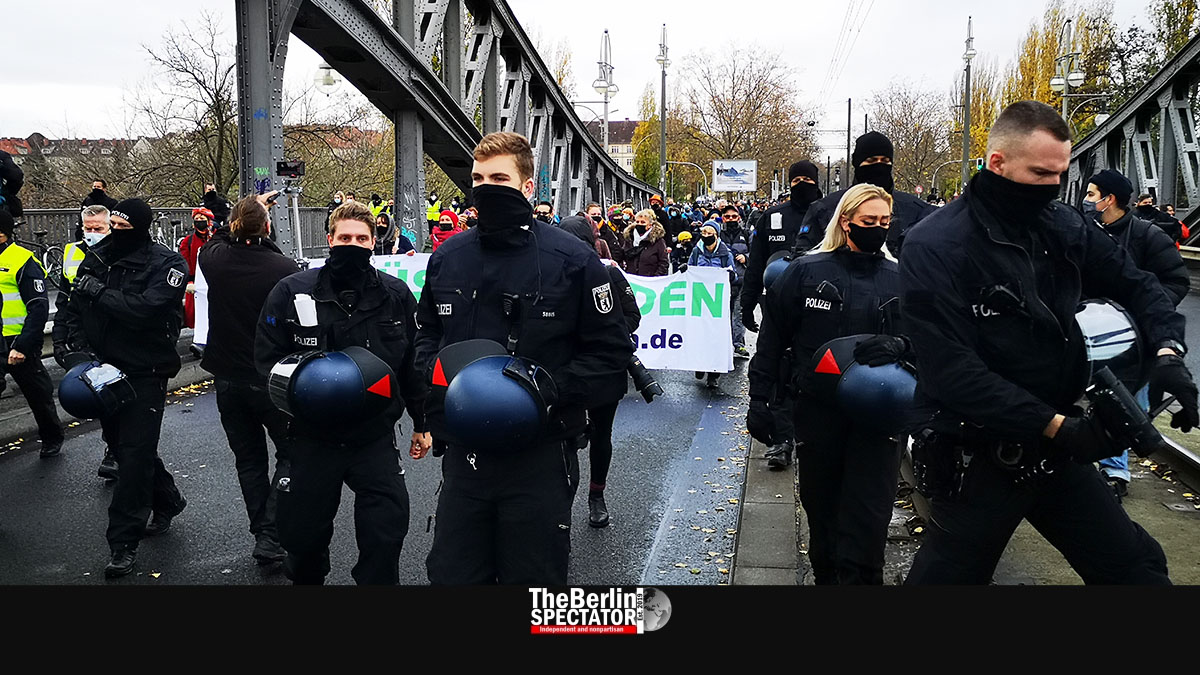 Yet again, Corona deniers and other individuals staged a protest against the Corona restrictions the government put in place in early November to protect people. In Berlin’s posh ‘Prenzlauer Berg’ borough, 600 police officers were rather busy.

Berlin, November 22nd, 2020, update November 23rd, 2020, 3:25 p.m. (The Berlin Spectator) — Some 1,000 conspiracy theorists and other persons rallied against the Corona restrictions in Berlin again. This time, most of them did wear masks. One of the organizers used a megaphone too tell the participants to put their masks on. “Otherwise they won’t let us continue with the rally”, she said. Among Corona deniers, wearing masks is frowned upon. They do not want to protect themselves against something they say does not exist.

From ‘Bornholmer Strasse’ to ‘Alexanderplatz’

All in all, these protesters followed the rules, also by keeping their distance to each other. There were persons who refused to put on masks and produced fake doctor’s certificates that said they did not need to wear them, due to medical conditions. They were arrested temporarily while their data were registered. The protesters walked all the way from the ‘S-Bahn’ train station ‘Bornholmer Strasse’ in the northern part of Berlin to ‘Alexanderplatz’ square.

This time, only a few participants had signs. One lady held a Christian cross with the words “freedom” and “democracy” written on it. One protester told The Berlin Spectator the German government only listened to the Robert Koch Institute (RKI) and he did not believe their numbers. The RKI is the German equivalent of the CDC in the United States of America.

Police officers blocked many intersections to traffic and enforced rules at the demonstration. They also restricted access to the rally. Several counter protests took place along the way. In many of those cases, people rallied against Nazis. In the past months, extremist right-wingers, including prominent antisemites, did take part in countless Corona denier protests.

Today, dozens of radical left-wingers, all dressed in black, provoked the police. First they blocked the street until officers carried and pushed them away. There were little scuffles during the process. Then this group of counter protesters accused the police of “aiding fascists” in chants. At that moment, they became conspiracy theorists themselves (see video clip below).

By carrying away those who blocked the street on time, the Berlin Police prevented a further escalation and possibly violence between Corona deniers and left-wing radicals.

On Wednesday, Corona deniers had teamed up with extremist right-wingers again, during a much bigger protest that escalated when they refused to put on masks. For the first time in 17 years, the police used water cannons when the protesters failed to disperse.

Apart from some side scenes and arrests, today’s protest of Corona deniers was peaceful. Thirty persons were arrested though. At 3:06 p.m., the police announced the protest had ended.