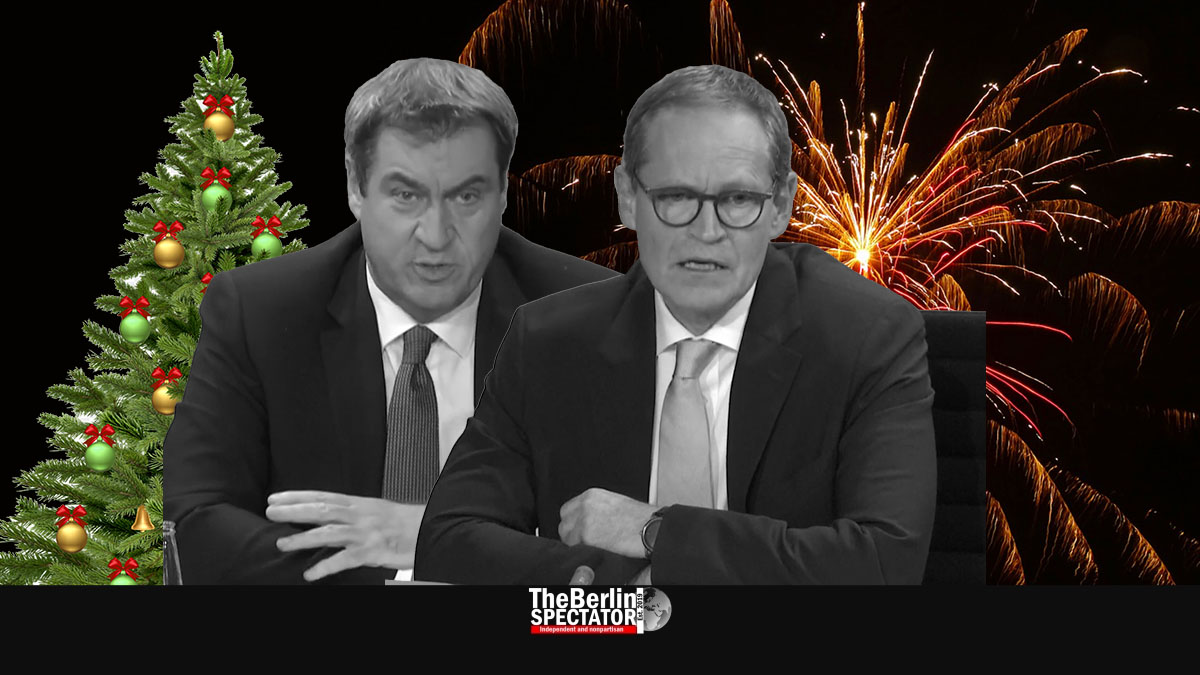 The heads of government of Germany’s sixteen federal states have prepared a draft resolution for their meeting with Angela Merkel. It includes eased restrictions for both Christmas and New Year’s Eve.

Berlin, November 24th, 2020 (The Berlin Spectator) — A day ahead of their online meeting with Chancellor Merkel, Germany’s thirteen First Ministers, the First Mayors of the city states Bremen and Hamburg and Berlin’s Governing Mayor Michael Müller have come up with a Corona strategy for Christmas and New Year’s Eve.

The content of the draft resolution might change during tomorrow’s Corona deliberations. But its content seems to be the basis on which Germany will go ahead in the next few weeks. The partial lockdown that had been put in place on November 2nd failed to get the number of new Corona infections down substantially, at least so far.

This is what the First Ministers and Mayors agreed on, according to virtually all major media in Germany:

> The partial lockdown continues, with some changes.

> From December 23rd, 2020 to January 1st, 2021, the contact restrictions will be eased. Up to ten persons from different households may gather. Children unter 15 are exempt from the rule.

> Before Christmas, citizens and other residents are being advised to go into quarantines in their homes. That way, the heads of government from the federal states are hoping to get the infection numbers down further before the holidays.

> Employers are being asked to consider closing their offices and other locations from December 23rd to January 1st.

> Restaurants, bars and cafés remain closed until December 20th, as long as the Seven Day Incidence Number of the federal state in question is above 50.

> In regions with high Seven Day Incidence Numbers, students from grade 7 to 13 are supposed to wear masks in class as well. Some federal states already have rules that are much stricter than this.

> Fireworks and firecrackers will not be banned on New Year’s Eve, but they are not supposed to be used on “busy squares and streets”.

> Masks will not just be mandatory in shops, but also in front of retail businesses and on parking lots.

It must have been hard to reach this compromise. Some First Ministers, including Markus Söder, had demanded tighter restrictions than the ones that made it into the draft resolution.

It remains to be seen whether the measures listed in the document survive the next 36 hours, meaning changes are possible. What it says about schools does not sound too strict. The same applies to the fireworks aspect. The issue is not the use of bangers or fireworks itself, but the fact that it can lead to big gatherings of intoxicated people.

Governing Mayor Müller said he was optimistic about the meeting on Wednesday. He told the ARD, there would be a consensus. Christmas needed to be a holiday that could be celebrated with grandparents and grandkids, Müller stated.