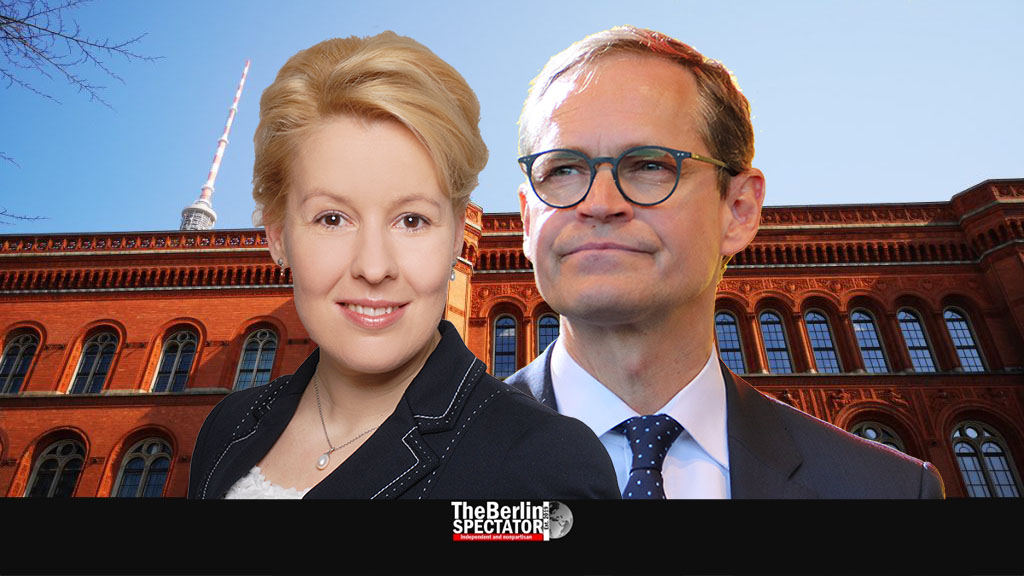 The SPD in Berlin now has a new leadership, consisting of Franziska Giffey and Read Saleh. With the change at the top, the party now has one more problem on a long list.

Berlin, November 28th, 2020 (The Berlin Spectator) — In the city state of Berlin, the Social-Democratic Party (SPD) now has a new leadership. Franziska Giffey, who is Germany’s Family Minister as well, and Raed Saleh, who has been the SPD’s floor leader at the Berlin House of Representatives for a long time, took over today. While Giffey got 237 votes from 265 delegates at the party convention, Saleh received 182.

The fact that the SPD’s delegates had to follow the convention from home because of Corona was the least of their problems. The fact that they may have dropped a man who could have been the better candidate at this stage, namely Michael Müller, is a far bigger issue. He has been Berlin’s Governing Mayor since 2014 and party leader since 2016. As opposed to Mrs. Giffey, he is not being followed by a plagiarism affair.

In January, Müller said he would not run for the party chair again in May, when the party convention was supposed to take place, after he may have been ousted behind the scenes. Suddenly, Mrs. Giffey and Müller’s old adversary Saleh presented themselves as the next candidates, with a lot of support. While Franziska Giffey is a gifted rhetorician with a strong personality and a lot of ambition, Raed Saleh’s speeches do not really spread a lot of excitement.

Now it turns out that, with its new leaders, the SPD in Berlin might not have less, but more problems than before. These are some of the main issues the party is facing:

> Its support is rather weak. In Berlin, both the Greens and the conservative CDU are stronger, according to the latest polls, in spite of the fact that the respondents already knew Franziska Giffey was coming. Red City Hall might have to be painted green or black, so to speak. The next elections are scheduled to take place in fall of 2021, along with the Bundestag elections.

> Governing Berlin is hard, especially when the centrist Governing Mayor has to hold his (or her) ground against far-left individuals, both in other parties and his (or her) own, who screw up useful plans.

> The SPD’s downward trend on the federal level will not exactly help its Berlin division either.

> The SPD does not have a backup plan, but it might need one badly rather soon, because of an issue its new chairlady brought along.

There is yet another issue: Certain German-language publications are campaigning against the SPD rather aggressively. A local daily slams Müller’s Senate almost every day, whatever it decides. And the ‘Bild’ tabloid just hit Michael Müller under the belt today, by calling him “Germany’s worst Corona manager”.

The paper ignored the fact that Berlin is not comparable to other federal states in Germany. On the other hand, ‘Bild’ does have one point: It accurately mentioned the fact that the Governing Mayor’s November letter to millions of residents arrived this week, when the month was almost over and the content was obsolete. The letter was about a rather important subject, namely Corona. Obviously, not everything at Red City Hall runs as smoothly as it should. But Müller is being treated like a doormat by some media and by his own party in spite of the fact that he mostly performed rather well since the Corona crisis commenced.

But the mother of all problems is a different one: Minister Franziska Giffey, the Berlin SPD’s new co-chair, was just overtaken by her potential plagiarism affair again. Her university is checking her dissertation again. Should it come to the conclusion that she is actually guilty of plagiarism, her political career will be turned into chopped liver within milliseconds.

Michael Müller intends to try to get into the Bundestag. He already took the first hurdle, by defeating his difficult State Secretary for Federal Affairs and Civic Participation, Sawsan Chebli, in the race for the candidacy in the electoral district Charlottenburg-Wilmersdorf. It was a success Müller badly needed, after being ousted by both the SPD’s party board last year, and by Berlin’s SPD early this year.