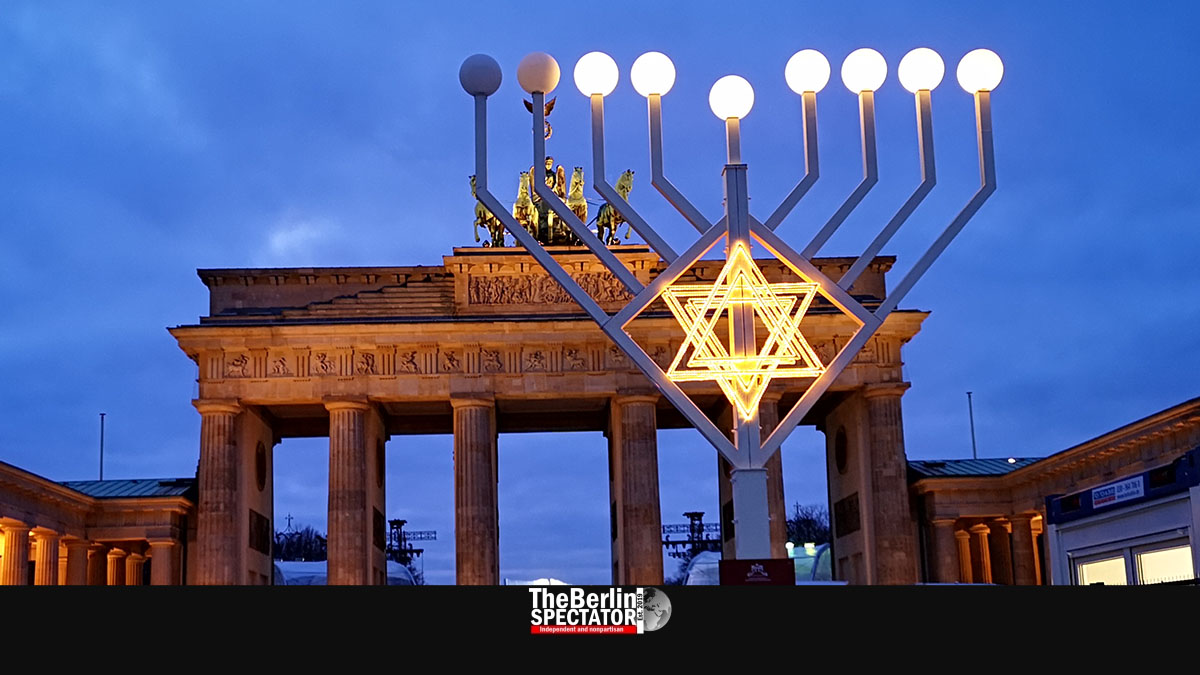 At Brandenburg Gate in Berlin, the traditional lighting of the big hanukkiah will take place on December 10th, 2020. The virus the world has been trying to curb for ten months now is not going to stop this Jewish holiday.

Berlin, December 6th, 2020 (The Berlin Spectator) — While Germany’s overwhelming Christian majority is preparing for Christmas, the tiny Jewish minority celebrates Hanukkah, the festival of lights. On December 10th, the first light of a giant ‘Hanukkah menorah’, also known as hanukkiah, will be lit in the heart of Berlin for the 16th time.

At Brandenburg Gate, the ceremony will not only show the world that the Jews are here, 75 years after the Holocaust, but also that they are here to stay, in spite of the hatred they are still being confronted with today. Solidarity with Jews in Germany is what non-Jewish participants are showing. A year ago, many of them were part of the lighting event.

There is one thing the Coronavirus achieved: There will hardly be any guests at the ceremony this year, except for a few special ones. Germany’s Health Minister Jens Spahn is one of them. Berlin’s Governing Mayor Michael Müller and Robert Habeck, the co-chairman of the Greens, will be there as well. And The Swingin‘ Hermlins are responsible for the music.

Any event or tradition like the lighting of the giant hanukkiah needs organizers. The Chabad Lubawitsch educational center in Berlin is behind it. Six Rabbis and a big staff have been educating people and bringing them together at schools and synagogues since Rabbi Yehuda Teichtal came to Berlin almost a quarter century ago. He jump-started the endeavor.

According to Chabad Berlin, there are more than 20 large hanukkiahs in Berlin. The one that will be set up at Brandenburg Gate is 10 meters (33 feet) tall. Those who symbolically light the first ‘candle’ need to be brought up there by crane.

This year, it is all about health. The Coronavirus has brought more of another virus to Berlin and the rest of Germany, namely antisemitism. At countless protests, Corona deniers and their Nazi friends accused the Jews of being behind the pandemic. The same blind hatred existed centuries ago, in the Middle Ages, when Jews were already blamed for all viruses or maladies that came along. The light spread by the giant hanukkiah symbolizes the good that stands up to obscure tendencies.

Because the dates for Jewish holidays are based on the Hebrew calendar, they vary on the Gregorian one. This year, Hanukkah takes place from December 10th to 18th. In 2021, it will be celebrated from November 28th to December 6th.

About 95,000 Jews in Germany are part of congregations. Just as many are not, meaning there are up to 200,000 Jews in this country. Since 1990, tens of thousands of Jews came to Germany from Russia and other former Eastern Bloc countries, after the collapse of communism, because of the rampant antisemitism there.