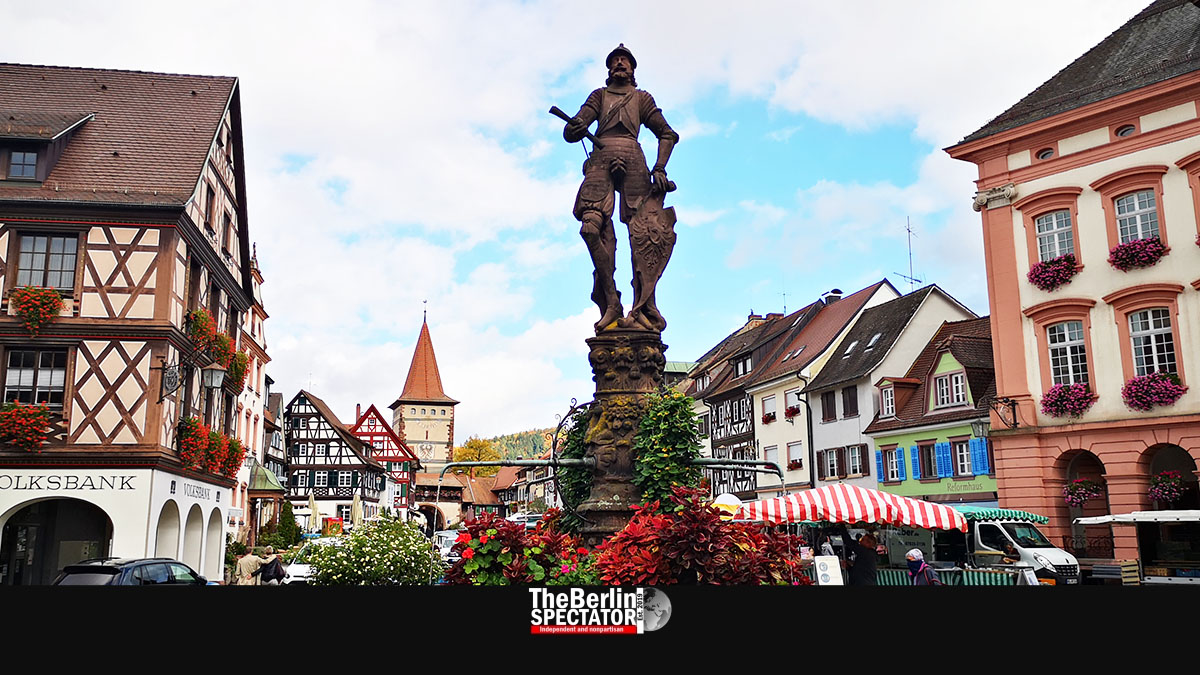 Located in the central Black Forest, Gengenbach is a small town that offers three things above all: a lot of history, good food and excellent wine. Almost 2,000 years ago, humans already lived in a settlement at this very spot.

Berlin, December 6th, 2020 (The Berlin Spectator) — Before tourists have eyes for all the beauty and historic buildings around them, they need to be fed well. In Gengenbach, a picturesque wine-growing town of around 11,000 inhabitants in Germany’s Black Forest (read separate piece ‘The Wonders of Germany’s Black Forest‘), getting great food is not a problem at all. The opposite is the case: It is hard to get out of there without overeating. The same applies to getting in there.

The dark sauce on top of the roast venison they offer at some of the town’s better restaurants is interesting indeed. So is the fact that truck driver-sized meals are being brought to the tables. By the way: What about wine?

Oh yes, Gengenbach has an annual Wine Fest in September, which is no coincidence, because the town is part of the Ortenau wine region in the Baden wine area. What this means is that it is all about wine down there. They grow a big grape variety that includes Müller-Thurgau, Riesling and Pinot Noir. The waitress who brought the roast venison was surprised when the author ordered an ‘Apfelschorle‘. To locals, that kind of scandalous order is a no-go.

Some 1,100 years later, in the late 12th and early 13th century, a farm and a market at the very same spot developed into a town. Gegenbach was mentioned in a document written in the year 1231. Another 135 years later, in 1366, it became an imperial town. The sky was the limit.

Turned into Rubble and Rebuilt

In the Thirty Year’s War, which took place in the 17th century, Gengenbach was basically turned into rubble in two wars. After being rebuilt, a big fire in 1789 destroyed dozens of buildings. Once they were rebuilt, the town got the look it still has today.

In the 19th century, Jews were not allowed to live in Gengenbach for a while. At some point, they returned. But the few Jews who resided there disappeared when the Nazis came to power. It took Gengenbach a while to come to terms with its history. Now there is a plaque that commemorates the former Jewish congregation, and a small memorial for deported Jews of Gengenbach.

More than half of all Gengenbachers are Catholics, about one in six residents are Lutherans. There is a mosque as well. Last year, the inhabitants mainly voted for democratic parties, meaning the extremist right-wing ‘AfD’ luckily does not have a following there. So far, the town has not ever had a female mayor, but it is not the only one.

The Black Forest offers so many nice spots. Gengenbach, with its historic buildings, its good food and wine is one of them. It is a good spot B that can be discovered on the way from A to C. Combining a visit with some hiking in the hills around town is another good idea.