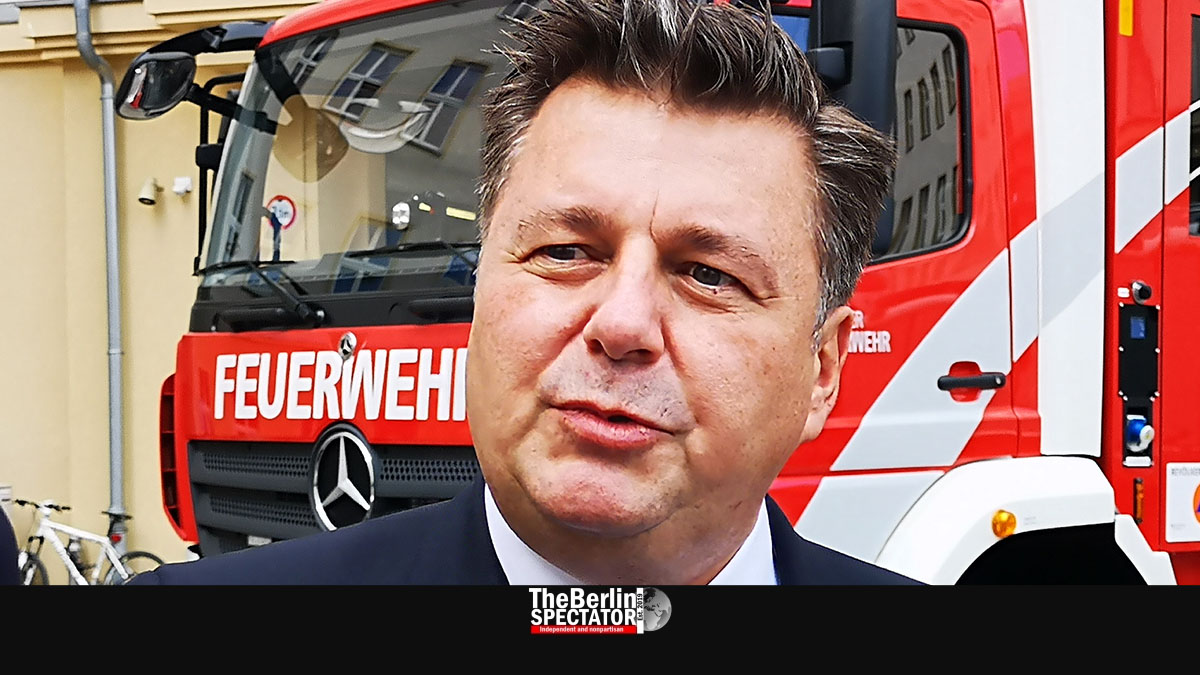 Berlin’s Interior Senator Andreas Geisel fears an escalation on New Year’s Eve. This is not only about fireworks and firecrackers. Corona deniers intend to stage yet another major protest that day. And there are even more problems.

Berlin, December 8th, 2020 (The Berlin Spectator) — The Berlin Senate is determined to enforce the infection protection rules on December 31st, according to Interior Senator Andreas Geisel. “It will not be a normal New Year’s Eve, especially for the Berlin Police Department”, he stated. The officers would be confronted with big challenges. One of the many issues is the fact that other federal states will not be able to help Berlin this time, because they need their police themselves.

At this stage, the Police Department was discussing things with the persons who had registered a protest of Corona deniers for New Year’s Eve, a statement read. A final decision on Berlin’s approach had not been taken, Geisel explained. If there is a way to ban the rally, Berlin might do so. Recently, the federal state of Bremen had put in place a protest ban which was confirmed by the Federal Constitutional Court.

Since April, Corona deniers have staged protests in Berlin countless times. It started with relatively small rallies at Rosa Luxemburg Square. More recently, the protests grew. Since the demonstrations started, the Corona deniers teamed up with antisemites and other haters who blamed the world’s Jews and Bill Gates for the pandemic. They spread the weirdest conspiracy theories.

Once, protesters with Reich’s flags managed to get close to the Reichstag’s entrance. During another protest, MPs for the extremist right-wing party AfD gave Corona deniers access to the Berlin Bundestag where they insulted Commerce Minister Peter Altmaier and harassed several members of parliament.

Another problem the Senate sees is the use of fireworks and firecrackers. Even before the Corona crisis, there were issues. Last year, Berlin implemented firecracker bans in two zones. The northern part of Alexanderplatz square was one of them, Pallasstrasse and the Steinmetzkiez neighborhood the other. Those ban zones were set up because, in the years before, intoxicated individuals had attacked police officers and firefighters with fireworks. This year, the use of firecrackers and similar products will be forbidden in the same zones.

For the conservative CDU in Berlin, Burkard Dregger demanded more ban zones. Senator Geisel said this was not possible because the city state of Berlin did not have enough police officers to control more than two ban zones. The Federal Police might support its colleagues in Berlin to some extent.

Corona is yet another issue this year. Because of the pandemic, the Police Department needs to make sure people do not gather in large groups while they enforce the firecracker bans as well, and possibly a protest ban for Corona deniers. The German law only supported local firecracker bans, Senator Geisel said. A ban of this kind for all of Berlin was not possible.

He also mentioned yet another problem: On New Year’s Eve, blank guns were being used a lot, Geisel said. Last year, firefighters were threatened with those. On December 31st, 2019, 125 offenses in connection with blank guns were registered in Berlin. At first sight, blank guns can hardly be distinguished from real ones. And they are dangerous too, because they can cause severe injuries.

Senator Geisel stated he wanted to limit both the legal and illegal use of blank guns, signal guns and irritant gas guns in Berlin substantially. The issue will be discussed at the conference of Interior Ministers later this week.