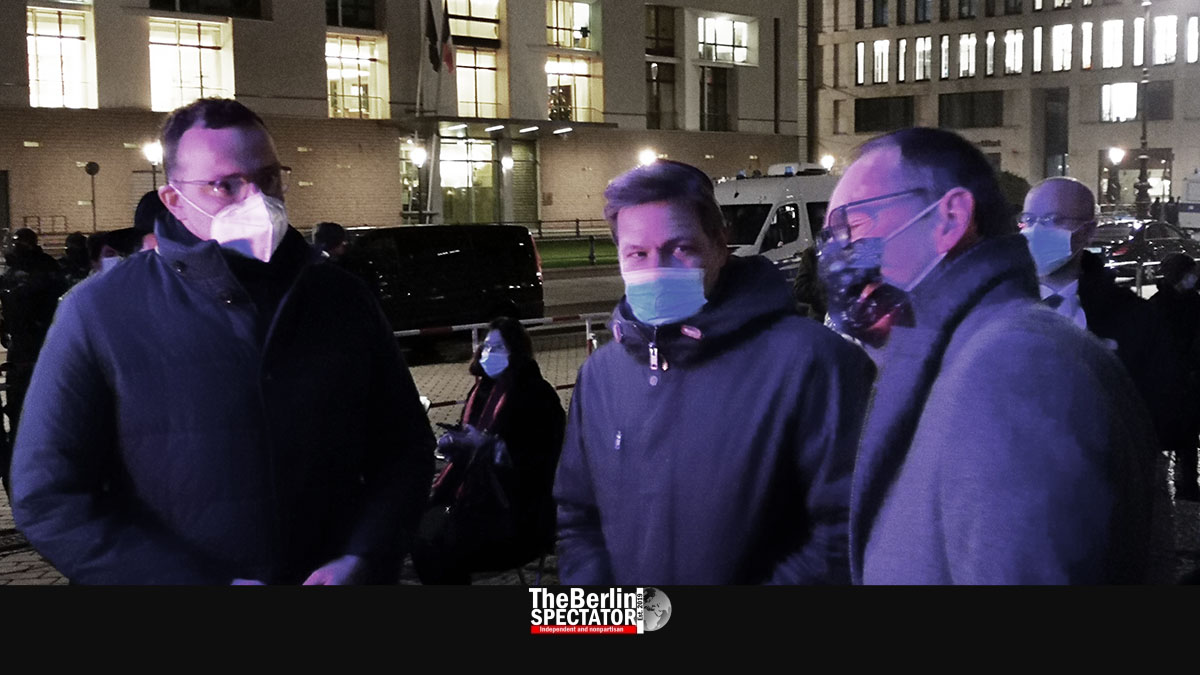 In spite of the cold and the virus, members of Berlin’s Jewish community and special guests were part of a Hanukkah ceremony at Brandenburg Gate this evening. Health Minister Spahn lit the first hanukkiah candle.

Berlin, December 10th, 2020 (The Berlin Spectator) — Rabbi Yehuda Teichtal welcomed Germany’s Health Minister Jens Spahn, Berlin’s Governing Mayor Michael Müller and Robert Habeck, co-chairman of the Greens, to this year’s lighting of the first Hanukkah candle ceremony. For the first time ever, the Ambassador of the United Arab Emirates took part. The Israeli Ambassador to Germany, Jeremy Issacharoff, was there too.

The message of light was always stronger than the dark, Rabbi Teichtal told the few guests on site and many more who could only watch the event online. And democracy was stronger than tyranny. The Rabbi said this year’s Hanukkah ceremony was dedicated to doctors and nurses who were standing on the front lines, helping people. Teichtal also mentioned the growing antisemitism in Germany. He stated condolences were not enough. There needed to be deeds against this kind of hatred.

Minister Spahn said it was soothing to take part in a family celebration like Hanukkah, the Jewish festival of lights the origins of which, some 2200 years ago, had been difficult. Today, there were difficulties as well, and deprivations. Spahn stated, many Corona patients were in intensive care units and many had died. But now there was hope. Never in history had there been a vaccination this soon after the outbreak of a virus.

Michael Müller said he was thankful and happy to be able to be part of the Hanukkah tradition. In a year like this one, which had not been easy due to the Corona pandemic, this sign of hope and optimism was important.

As an important symbol of Jewish life, the hanukkiah in front of Brandenburg Gate was part of “the city’s affirmation to the Jewish community and Jewish individuals in our diverse metropolis”, Müller stated. Berlin was in line with many cities in the world in which similar ceremonies were taking place today, cities that supported tolerance and took a stand against antisemitism.

On Thursday morning, Rabbi Yehuda Teichtal and a colleague had consecrated the giant ‘Hanukkah menorah’, or hanukkiah, at Brandenburg Gate during a little ceremony. It is 10 meters (33 feet) high, which is why a crane lifted them up to the lights. Teichtal heads the organization Chabad Berlin which brings part of Berlin’s Jewish community together in synagogues and schools.

At Brandenburg Gate, the crowd was rather small this time, for obvious reasons. Most of those who would have come to Brandenburg Gate under normal circumstances watched the event online. Security at the lighting event was tight, as always when Jews are involved. ‘Pariser Platz’ square in front of the Gate was closed even to pedestrians. This was the case because of the wide-spread antisemitism and the danger Jews are in, 75 years after Nazi Germany was defeated and Auschwitz liberated.