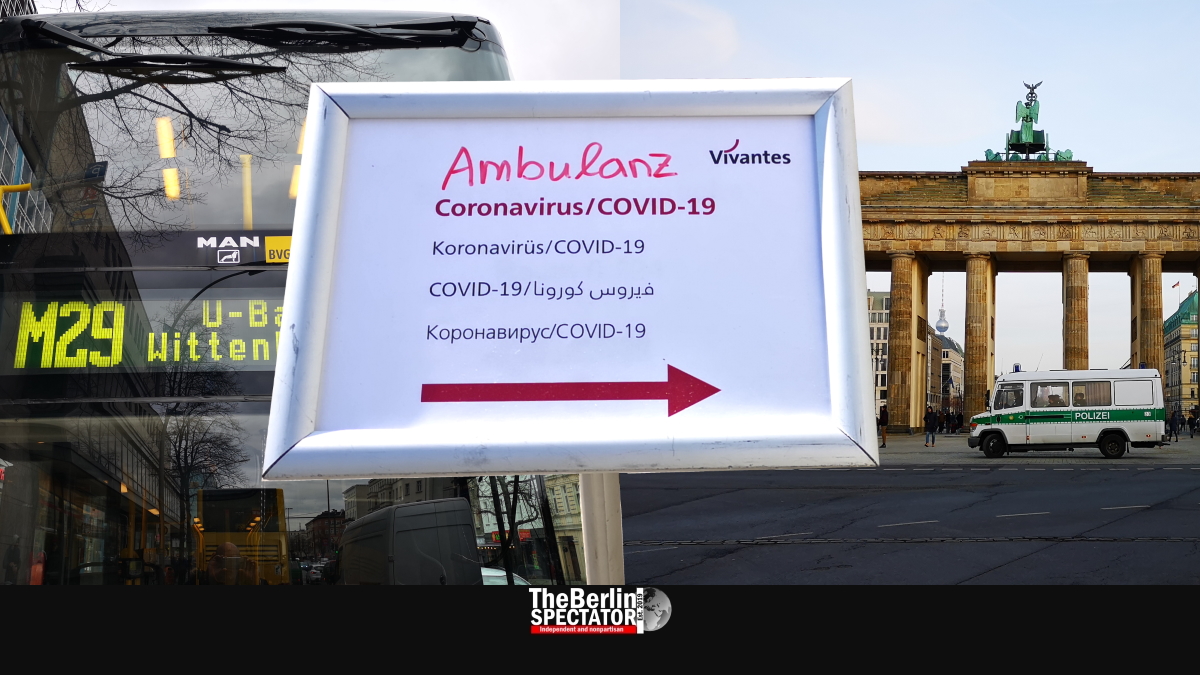 Germany just reported the highest number of new Corona infections it ever had within 24 hours. The number of related deaths in the same time period is a sad record as well. A strict lockdown is on the horizon.

Berlin, December 11th, 2020, update 12:17 p.m. (The Berlin Spectator) — With 29,875 new Corona infections within 24 hours, Germany has reached a new peak. The Robert Koch Institute also had to release the highest number of Corona-related deaths. In one day, 598 Corona patients died. These terrible numbers prove that the partial lockdown that has been in place since November 2nd, and which was tightened in early December, is not strict enough.

According to the data provided by Johns Hopkins University, the number of new infections within 24 hours is even higher, namely 32,734. Germany is losing control. Chancellor Merkel and some First Ministers had wanted to tighten the Corona rules between Christmas and January 10th. They might have to antedate that plan.

This is a possibility Berlin’s Governing Mayor Michael Müller just mentioned in an interview. On ‘Markus Lanz’, a talk show on ZDF TV, he said there might be substantial restrictions from December 20th, 2020, until January 10th, 2021. Many retail businesses would likely be shut down, Müller stated.

He said schoolkids would be on vacation by the 20th anyway. At that point, just before Christmas, many Germans would not go to work anymore. The Governing Mayor explained there would be three weeks for harsh restrictions that would lead to a decrease of new infection numbers. Müller also heads the Conference of First Ministers. He said even colleagues from federal states that had lower infection numbers were now ready to agree to a stricter lockdown. Chancellor Angela Merkel’s latest pleas had been helpful, Müller said. On Friday morning, German-language media reported a decision would be taken during yet another Corona conference with Angela Merkel and the First Ministers.

So far, Bavaria and Berlin have Corona rules for Christmas and New Year’s Eve that were tightened to some extent. Saxony will likely follow on Monday. Thuringia wants to close most retail businesses, while Baden-Württemberg is close to putting in place stricter rules as well, including curfews at night. The restrictions Mrs. Merkel and the First Ministers are working on, behind the scenes, might be similar.

Michael Müller has been a proponent of tightened Corona rules for a while now. At the Berlin House of Representatives, he asked this rhetorical question on Thursday: “How many deaths is one shopping experience worth to us?” Müller obviously wanted to show that the discussion about restrictions needs clear priorities.

Just like in many other regions in Germany, the situation in Berlin is bad. In the German capital, the number of new infections per day ist rising again. It amounted to 1,656 on Thursday. Now, 1,322 Corona patients are being treated at Berlin’s hospitals, 346 of them in ICUs. The Seven Day Incidence Number for Berlin exceeded 200 again.

In an interview with the ARD radio and TV network, Professor Heyo Kroemer, the CEO of Berlin’s Charité university clinic, said Germany’s hospitals could be in a state of calamity soon. He pleaded for a quick reaction to the high infection numbers.

On Friday morning, the First Minister of North-Rhine-Westphalia, Armin Laschet, said there would be a strict lockdown. This approach was the only way, considering the numbers. This weekend, Angela Merkel and his colleagues would decide when exactly the measure would be put in place.

Baden-Württemberg just announced a curfew that will kick in on Saturday, December 12th, 2020. It applies from 8:00 p.m. to 5:00 a.m. every day. During the day, people need valid reasons when they leave their homes. Those include visiting supermarkets, pharmacies, doctors and vets. An alcohol ban in public areas will apply from tomorrow as well.