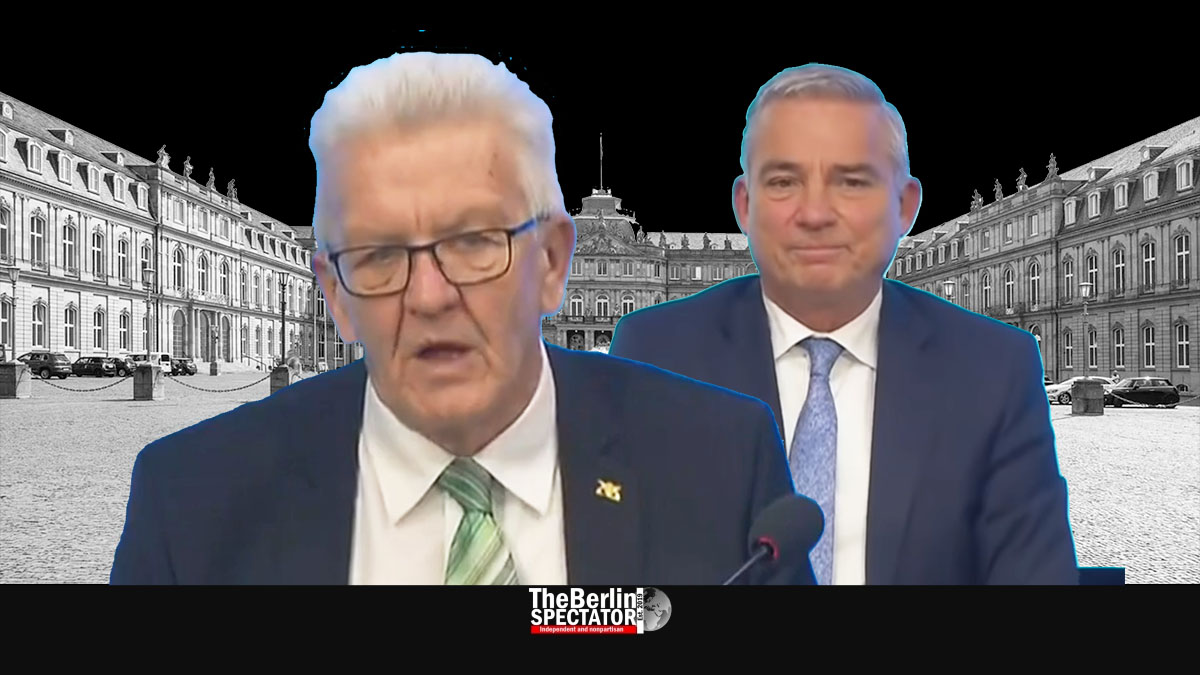 In spite of relatively strict Corona rules, the infection numbers in Germany are rising again. On Sunday, Angela Merkel and the First Ministers are scheduled to discuss the implications of the latest developments.

Berlin, December 12th, 2020 (The Berlin Spectator) — On Friday, Thomas Strobl, the Interior Minister of the federal state of Baden-Württemberg (see main photo, on the right), explained the state of affairs more bluntly than anyone else in the country: “The situation is out of control”, he said at a Stuttgart press conference he held with his boss, Winfried Kretschmann (photo, on the left).

Minutes earlier, the First Minister himself had announced a tightening of the Corona rules for his state. It kicked in this morning. A curfew between 8:00 p.m. and 5:00 a.m. is part of the new set of Corona measures. Residents of Winfried Kretschmann’s state now need a valid reason to leave their homes. They may shop for food or medication or go to the doctor. The list contains a few more valid reasons, but life in Baden-Württemberg just changed substantially.

What is happening down there in south-west might be a preview of what could be going on all of Germany in a few days from now. When Germany considers closing retail businesses just before Christmas, something must be really wrong. But this is exactly what Chancellor Angela Merkel, Winfried Kretschmann, the other twelve First Ministers, two First Mayors and one Governing Mayor will be discussing tomorrow morning.

Apart from Kretschmann, the only Green First Minister in the republic, some of his colleagues appeared in front of countless cameras and microphones on Friday, including Armin Laschet from North-Rhine Westphalia. He demanded a strict lockdown before Christmas while he was already discussing the matter with his colleagues behind the scenes.

Laschet said Germany needed uniform rules to fight Corona effectively. Just months before, Laschet had kept on defending his unilateral steps and lifting restrictions in North Rhine-Westphalia. The fact that even he wants a strict lockdown for all of Germany shows how serious the situation is.

In Thuringia, Laschet’s colleague Bodo Ramelow prepared the residents of his state for “quiet nights”. The numbers were too high. Ramelow described the Corona situation as “overly dynamic”. He used to reject strict measures for his state. But, due to the latest developments, he changed his position too.

In Berlin, Commerce Minister Peter Altmaier said a loss of control was imminent, meaning his statement was more moderate than Strobl’s remarks in Stuttgart. Altmaier told the ‘Redaktionsnetzwerk Deutschland’, the infection situation had accelerated dramatically in the past days. There was an exponential growth again what the number of new infections was concerned. The first ICUs had reached their limits.

The Robert Koch Institute in Berlin reported 28,438 new Corona infections within 24 hours, which is one of the highest increases since the crisis began in January. Since yesterday, 496 Corona patients died.

Germany is not alone. In Austria, the situation is deteriorating as well. Chancellor Sebastian Kurz just retracted some of the easements he had announced for Christmas and New Year’s Eve. Gatherings with up to ten persons will be possible from December 24th to 26th only, Kurz was quoted saying by Austrian media. Originally, this exception was supposed to apply to New Year’s Eve too. Not anymore. Before and after Christmas, up to six adults and six children from up to two households may meet. Austria also has nightly curfews.