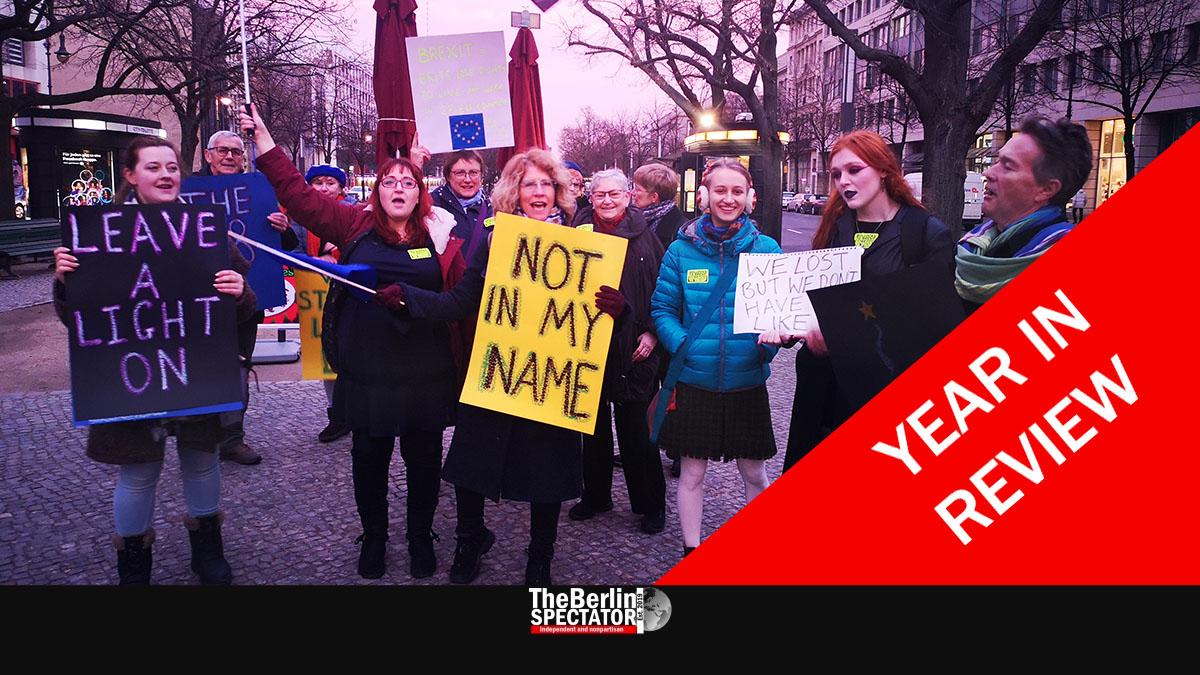 The fact that 2020 was supposed to be very different goes without saying. Corona messed up absolutely everything. But lots of other things happened too. Here they are.

Berlin, December 13th, 2020 (The Berlin Spectator) — When 2020 commenced in Germany, the city cleaning departments had a busy day. When they cleaned away thousands of empty champagne bottles and the remainder of millions of firecrackers from the street, they probably thought the new year would improve on January 2nd. It did, for four weeks.

On New Year’s Eve 2019/2020, Chancellor Angela Merkel told the nation that global warming was real and threatening. She was right. What she did not know at that moment is that a second huge challenge would jump right into her face and that of the entire country, not to mention the world.

Everything was awesome in Cologne when the ISM Sweets trade fair took place in early January. After the United States killed the Iraqi commander Qasem Soleimani, who was linked to deadly terror attacks around the world, the Bundeswehr, Germany’s armed forces, suspended a training program for Kurdish security officers and the central Iraqi government because they feared retaliation.

At the Freienbrink industrial park in Brandenburg province, the land the Californian company Tesla purchased for its European ‘Gigafactory’ was still a tree plantation in early January. Some Greens were, and still are, glad electric vehicles will be built in Brandenburg, others hated the idea of cut plantation trees. The same Greens celebrated their 40th anniversary on January 10th, 2020.

On January 16th, Germany’s Health Minister Jens Spahn, who would soon become very busy with a pandemic, failed to get his ‘dissent solution’ through the Berlin Bundestag. It would have made everyone an organ donor automatically. On January 19th, 2020, the Libya Conference made parts of Berlin a fortress. And the Green Week was the last major trade fair that took place before Corona.

“The worst crime in the history of humanity was committed by my countrymen. The war originated from my country. Seventy-five years later, I stand before you, laden with the historical burden of guilt.”

What Corona is concerned, the Health Ministry said there was “no reason for alarmism” on January 23rd while the Foreign Ministry was busy releasing travel warnings from China, because of the virus. At this moment, Germany was four days away from reporting its first Corona infection case. (For all things Corona, read separate feature ‘Chronology 2020: Germany and the Corona Pandemic‘).

On January 23rd, the most important event took place at Yad Vashem in Israel. Germany’s President Steinmeier commemorated the 75th anniversary of the liberation of Auschwitz with many other world leaders, by delivering an excellent speech. He did so again a few days later, at a similar commemoration event at the former death camp itself, and at the Berlin Bundestag, where his Israeli colleague Reuven Rivlin spoke as well.

On Friday, January 31st, 2020, a group of British expatriates staged a protest against Brexit, a few hours before it actually took place, at Unter den Linden in Berlin, only steps away from Brandenburg Gate (see photo at top of page).