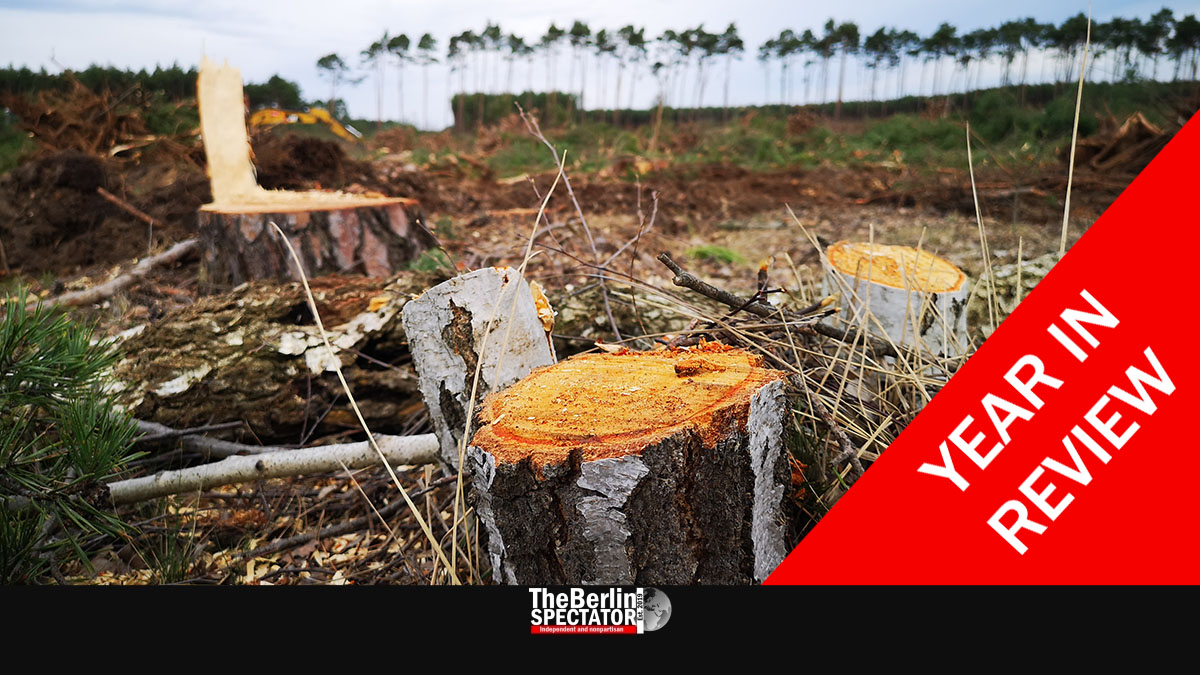 As we all know, Corona messed up absolutely everything this year. But lots of other things happened too. Here they are.

Berlin, December 14th, 2020 (The Berlin Spectator) — On February 1st, 2020, Angela Merkel said she regretted Brexit. Germany wanted to remain friends with the United Kingdom. Brexit was “a deep cut for all of us”, Merkel said. She wanted the European Union “to continue to have a close relationship” with the U.K. as well.

While Brexit was unfolding, Corona hit Europe. (For all things Corona, read separate feature ‘Chronology 2020: Germany and the Corona Pandemic‘). On February 3rd, the Berlin Police Department announced it wanted to clean up Görlitzer Park, which was controlled by drug dealers. It still is today.

Angela Merkel visited South Africa an Angola in early February. She wanted to concentrate on trade relations and aid, but was forced to deal with an issue back home: In the federal state of Thuringia, the FDP and the CDU teamed up with the extremist right-wing AfD, by voting for the FDP’s candidate for First Minister, Thomas Kemmerich.

Because of a lack of leadership on the CDU’s chairlady Annegret Kamp-Karrenbauer, Mrs. Merkel had to comment on the situation from Pretoria: “We will not accept majorities reached with the help of the ‘AfD’.” The election result in Thuringia needed to be annulled, the Chancellor said. It was, a few weeks later. Bodo Ramelow of the left-wing ‘Die Linke’ became First Minister again.

On February 9th, the storm system ‘Sabine’ hit Germany. It had a “destructive potential”, experts said back then. In the end, it did some moderate damage and disrupted traffic. On February 10th, Annegret Kramp-Karrenbauer announced her resignation. By taking this step after the Thuringia fiasco, she also said goodbye to a good chance to move into the chancellery after the Merkel era. Until today, there is no successor for Mrs. Kramp-Karrenbauer.

On February 13th, 2020, it was up to Germany’s President Frank-Walter Steinmeier again to find the right words. In Dresden, he took part in a commemoration event for the 25,000 residents who died when the city was bombed by the Allies 75 years earlier. “When we recall the bomb war, we think of both the sorrow of Germans and the sorrow the Germans inflicted on others”, Steinmeier said. “We will not forget that Germans started this brutal war.”

Three days later, on February 13th, 2020, a court stopped the felling of plantation trees in Grünheide, an industrial park in Brandenburg province, where Tesla intends to build its ‘Gigafactory’. The same issue would pop up again in December of 2020.

The first of a series of police scandals surface on February 19th, 2020. An officer in Berlin was part of a chat group with other policemen, in which he supposedly spread “right-wing extremist content”. Several more police scandals of this kind arose in different parts of Germany in 2020.

In spite of the spread of the Coronavirus in Europe, the organizers of the ITB travel trade fair in Berlin insisted the event would take place on February 19th. (For all things Corona, read separate feature ‘Chronology 2020: Germany and the Corona Pandemic‘.) They believed the “issue” could be resolved with a few disinfection fluid dispenser in lavatories until they had no choice but to cancel the ITB.

During a shooting spree in Hanau, a gunman killed nine people with immigrant backgrounds in two Shisha bars and his mother before he committed suicide. After the shocking murders, Chancellor Angela Merkel said racism and hatred were poison. “We will continue to champion for a peaceful togetherness”, Steinmeier told the nation. Interior Minister Horst Seehofer increased police presence all over Germany.

On February 22nd, Berlin’s tourism numbers were released. As it turned out, the German capital had broken its own record in 2019, by attracting almost 14 million tourists, half a million more than in 2013. Little did the city know its number of tourists would slump down to zero a few months later, because of the elephant in the room. (For all things Corona, read separate feature ‘Chronology 2020: Germany and the Corona Pandemic‘.)

Victory in the Last Bastion

In Hamburg, First Mayor Peter Tschentscher won the state elections on February 23rd, 2020. His SPD got 39.2 percent of the vote, his Green partners 24.2 percent. From the perspective of the SPD, the world is still standing in Hamburg. The city state is their last bastion.

Angela Merkel’s CDU, which got its worst result of all time in Hamburg, is a lot stronger than the SPD in most of Germany. Since the conservative party needed a new leadership (and still does today), two members officially announced their candidacy, namely Armin Laschet, the First Minister of North Rhine-Westphalia, and the old Merkel-foe Friedrich Merz. Health Minister Jens Spahn, the most capable and least self-centered politician among the candidates, dropped out of the race and teamed up with Laschet.

On February 26th, 2020, Germany’s Federal Constitutional Court sacked a law that prohibited euthanasia. The judges said there was a “right to self-determined dying”. In the meantime, the number of road deaths decreased to the lowest level in sixty years. With 3059 of them in 2019, there were still too many.

The Berlinale ended on February 29th, 2020, with lots of Bears for good films, just before big events were cancelled because of Corona.