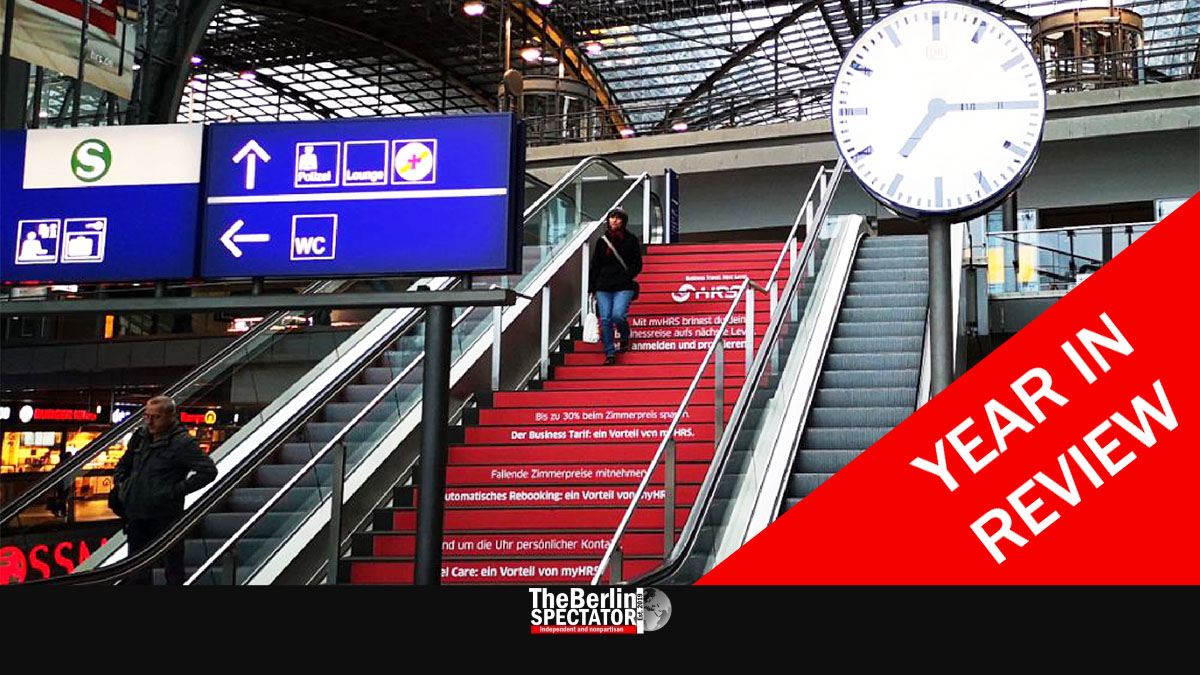 We all know what dominated 2020. The first lockdown was put in place in March. But other things happened as well. Here they are.

Berlin, December 15th, 2020 (The Berlin Spectator) — One of the stories that kept on popping up all the time in 2020 was the preparation for the opening of BER Airport and the closure of both Schönefeld and Tegel Airport. On March 2nd, the company FBB, which ran all airports in and around Berlin and now has one big airport left, announced it would rename the terminals in Schönefeld, the airport which became Terminal 5 of BER Airport in October. Nobody really cared.

On March 3rd, Tesla announced it would start building its ‘Gigafactory’ in Brandenburg later that month, while Germany’s left-wing party ‘Die Linke’ slid into an embarrassing scandal. In early March, a video of a party event surfaced. It showed how a member said this: “Once we have shot the one percent of the rich, we will still want to heat our homes and travel.” Party chairman Bernd Riexinger reacted a bit later: “We are not shooting them, but we will make them do some useful work.” Only when the scandal broke, he sort of apologized for not criticizing the lady who made that statement.

A day later, on March 4th, 2020, the Thuringia scandal ended. Bodo Ramelow, another member of ‘Die Linke’, was elected First Minister by the state parliament. He now heads a minority government. In the meantime, the national discussion about migration intensified again. In early March, Berlin’s Governing Mayor Michael Müller said he wanted to accept more refugees from Greece, but things turned out to be complicated.

On International Women’s Day, March 8th, thousands of Berliners staged a big protest for equality. Angela Merkel, the first female head of government in Germany, said enforcing equality was a big task and a subject that still played a big role in Germany. What compatibility of family and career was concerned, the country had made headway. But the percentage of employed women at certain ages was still lower than that of men.

Berlin did not seem to be able to resolve a number of issues on Oberbaumbrücke, one of the German capital’s more famous bridges. Germany’s Office of Constitution Protection had a far graver issue. It looked into the activities of the so called ‘Flügel’, the most radical faction in the extremist right-wing party ‘AfD’. As a result, the ‘Flügel’ officially disbanded itself, but its former members are still part of the AfD today.

On March 16th, Germany announced its first Corona lockdown. On March 23rd, it was put in place. The rest of the month was dominated by the pandemic. It was all about contact restrictions, keeping one’s distance and closing down shops and schools, just like today.

In order to save companies and jobs in the Corona crisis, Chancellor Merkel’s cabinet approved an aid program worth more than 150 billion Euro (161 billion Dollars or 139 Pounds Sterling). Germany’s cities, including Berlin, were rather empty in late March. (For all things Corona, read separate feature ‘Chronology 2020: Germany and the Corona Pandemic‘)