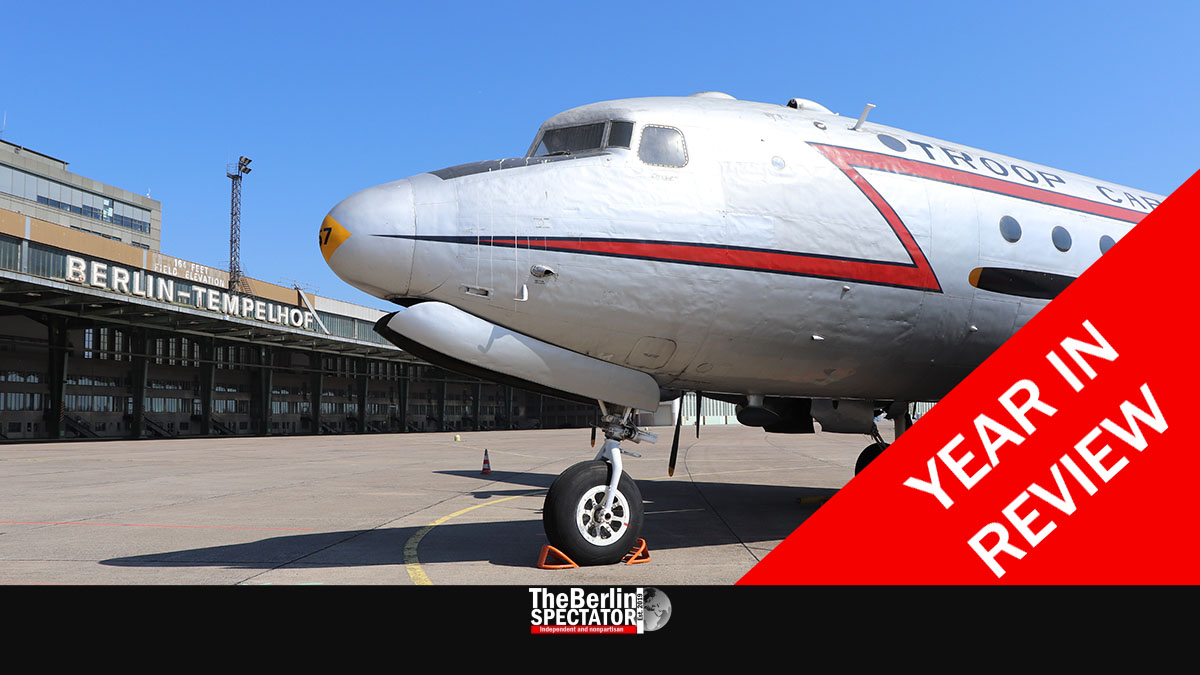 One day we read a story about some virus that spread in China. Shortly after, it arrived on our own continent. Apart from Corona, lots of other things happened. Here they are.

Berlin, December 19th, 2020 (The Berlin Spectator) — The month of May started with another protest staged by conspiracy theorists at Rosa Luxemburg Square in Berlin. A TV team was attacked at that rally. Five people were injured, two of them seriously. Police officers arrested six suspects.

The ‘Revolutionary May 1st Demonstration’ was forbidden in 2020, because of Corona. Still, far-left protesters tried to gather in Berlin’s Kreuzberg borough. But the Berlin Police Department read their social media channels as well. They prevented the protest from happening by making sure those groups of potential participants did not manage to gather in big groups.

A day later, the Greens showed Germany how to organize an online party convention. During the Corona pandemic, it was hard to be an opposition party, since Chancellor Angela Merkel was omnipresent in the media. Besides, she had a lot of support because of her successful Corona policies. As a result, the Greens slumped in the polls, down to 16 percent. The Green party’s co-chair Robert Habeck had this to say about that poll: “I don’t give a damn.”

On May 6th, Germany was ready to move back towards some kind of normality because the infection numbers decreased. Mrs. Merkel announced the distancing and hygiene rules and contact restrictions would remain in place, but all shops and many businesses, including restaurants, could reopen after the first lockdown. The same applied to playgrounds, museums and other places. (For all things Corona in 2020, please read separate feature ‘Chronology 2020: Germany and the Corona Pandemic‘.)

On May 8th, 2020, the 75th anniversary of the defeat of Nazi Germany, it was up to Frank-Walter Steinmeier to speak to the nation. The President of Nazi Germany’s successor country, the free and democratic Federal Republic of Germany, found the right words yet again: “May 8th was the end of the Nazis’ tyranny, the end of bombing nights and the end of unprecedented German war crimes and the Shoah”, Steinmeier stated.

At Tempelhof Airport, Ambassadors, Governing Mayor Michael Müller and other guests took part in a little ceremony which marked the 71st anniversary of the end of the Berlin Airlift. Gail Halvorsen was a pilot for the U.S. Airforce back then. He was the one who started dropping chocolate and other sweets for the children of Berlin from his plane. Halvorsen, who is Berlin’s biggest friend even today, turned 100 in 2020. Because of Corona, he could not come to the ceremony this time.

On May 20th, 2020, Berlin published its latest intelligence report. The outcome: Right-wing radicals, left-wing radicals and Islamists pose the biggest danger to society and democracy. The first of several court decisions in Volkswagen’s Diesel scandal was taken in May. The auto giant needs to compensate individuals who purchased Diesel cars before the scandal broke, because they believed the company’s inaccurate emissions data.

Some of the Best

In late May, The Berlin Spectator identified some of the best doner kebab in the city. It is being made and sold by the Aygün brothers at several ‘Hasir’ spots all over Berlin.

Even though Corona is dominated the spring as well, some lighter stories surfaced. For instance, Berliners love to drive exotic cars. As many as 191 Aston Martins were moving up and down the streets of Berlin in May, and four Bugattis.