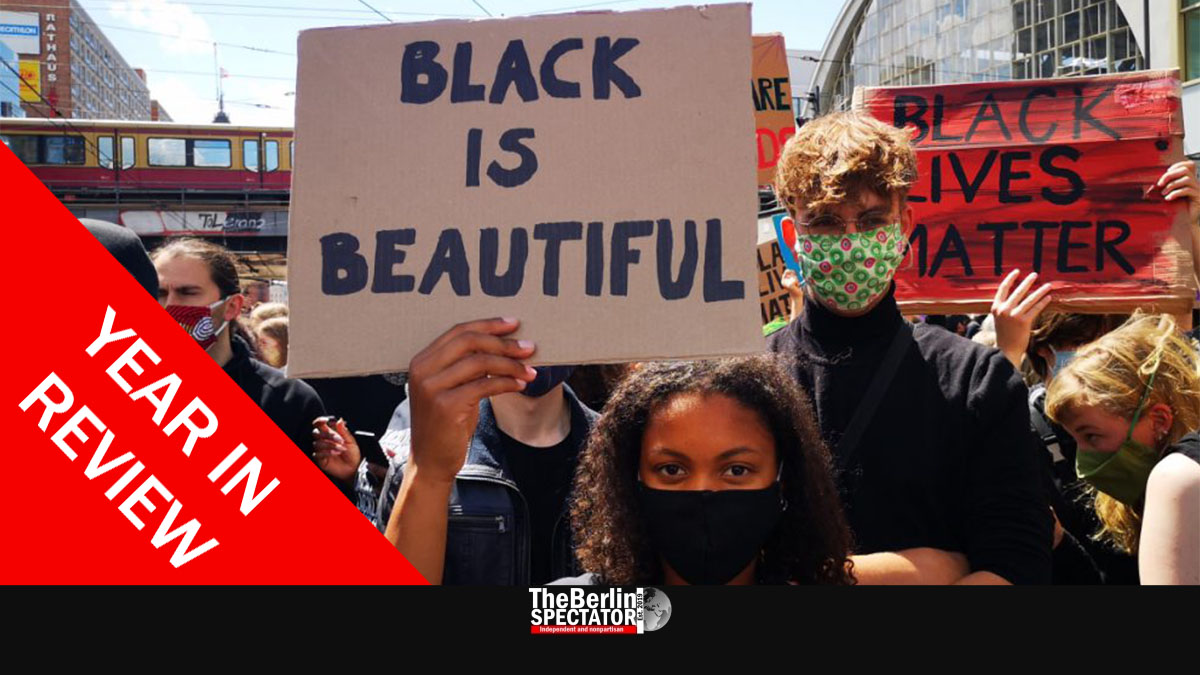 Corona defined and messed up 2020. But there were some news and events that were only partially related to the virus, or not at all.

Berlin, December 22nd, 2020 (The Berlin Spectator) — In spring and summer, party people kept on exaggerating, especially in Berlin. When temperatures rose and even some tourists returned to the German capital, they threw all warnings overboard, for instance by organizing a giant boat party on the Landwehr Canal. There were hundreds of boats, loads of alcohol and constant techno sounds, but no distancing and hardly any masks. Politicians and virologists were shocked. The discussion about this boat party carried on for a long time.

On June 5th, 2020, Richard Grenell, the U.S. Ambassador to Germany, resigned. He had been criticized for not being too diplomatic. From the German perspective, most of his demands were not acceptable either, including dumping the Iran Deal and the North Stream III pipeline project, and increasing defense spending. At least Germany finally banned Hezbollah, about a month before Grenell left.

(For a complete Year in Review related to Corona in 2020, please check separate feature ‘Chronology 2020: Germany and the Corona Pandemic‘.)

The Corona crisis triggered a renaissance of the bicycle. Bike sales skyrocketed in Germany. Berlin set up ‘pop-up bike lanes’ on major streets to give cyclists more room and safety. Many people reactivated their velocipedes. One of their advantages: As opposed to horses, they do not sh*t on the street. Also, cycling through cities was — and still is — less dangerous than using public transport because of the virus situation.

While the bicycle had a rebirth, the airplane did not. Because of Corona, the number of flights slumped substantially. For that reason, the three owners of Tegel Airport, namely the federal states of Berlin and Brandenburg and the Federal Republic of Germany, were going to close it down early. It was simply not needed because Schönefeld Airport in Brandenburg could have handled all air traffic there was. But then the early shutdown was cancelled, also because Germans were taking off to holiday destinations again.

Days after George Floyd was murdered by a cop in Minneapolis, thousands of Berliners took to the streets in order to protest against racism and police brutality in the United States. As many as 15,000 participants appeared at Alexanderplatz, a major square in Berlin, on June 6th. Their message was “Black lives matter”. While the distancing did not work at all, everyone wore masks.

A long “human chain” against racism was formed in Berlin a week later. The company Signa holding, which owns all 172 ‘Karstadt’ and ‘Galeria Kaufhof’ department stores in Germany, announced it would close 62 of them. The Interior Ministry in Berlin banned yet another Nazi group.

Shareholders and the European Union approved Germany’s salvation deal for Lufthansa. Its volume: 9 billion Euro (9.87 billion U.S. Dollars or 8.09 billion Pounds Sterling). The deal included a gigantic loan by the state-owned KfW Bank. Also, the Federal Republic of Germany became the biggest Lufthansa shareholder, by acquiring 20 percent of the company. Germany’s involvement gave Lufthansa the liquidity it needed to take off again for a while. But most aircraft were — and still are — parked.