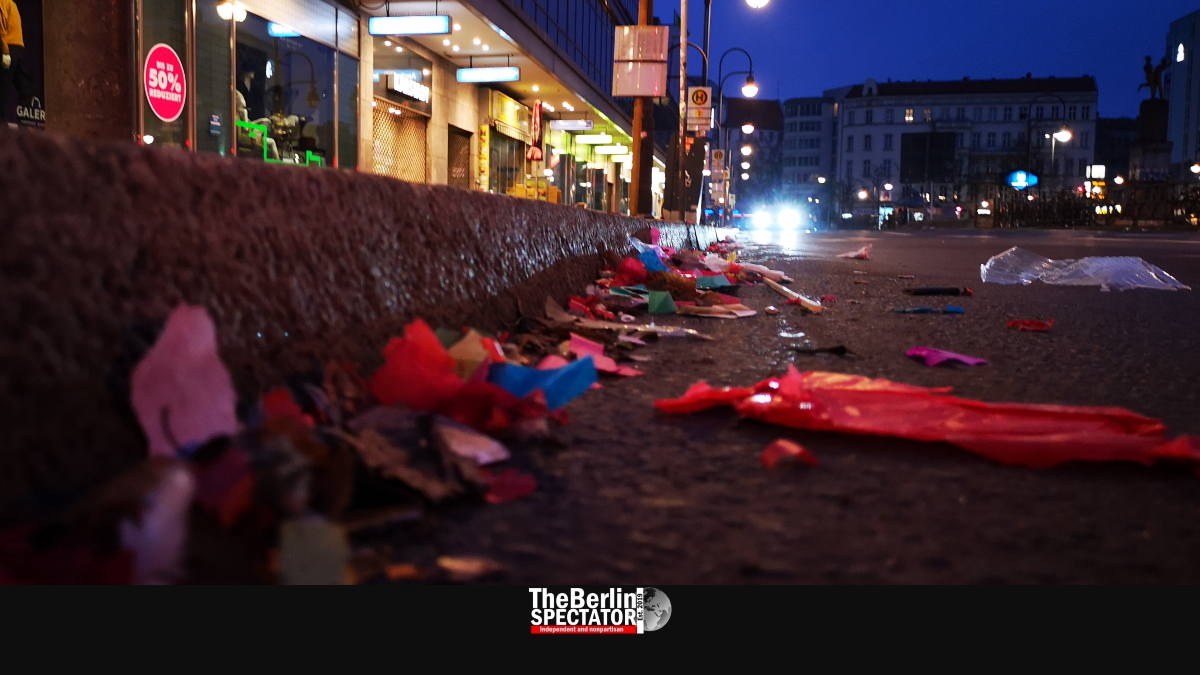 Berlin just forbade the use of pyrotechnical products in 56 zones throughout the city on New Year’s Eve and New Year’s Day. They include streets, squares and parks. Offenders have to pay hefty fines.

Berlin, December 23rd, 2020, update 8:30 p.m. (The Berlin Spectator) — What the Berlin Senate is putting in place for New Year’s Eve is something like a semi fireworks and firecrackers ban. Using these kinds of products was going to be forbidden in two zones. Now their number was increased by 54. Even staying in those areas will be forbidden on December 31st, 2020, and January 1st, 2021. Passing through is allowed though.

A ban on selling or purchasing firecrackers had been announced before. So had two banger ban zones. One of them is the northern part of Alexanderplatz square, the other Steinmetzkiez, a neighborhood in Schöneberg. According to the Senate, offenders will have to pay fines from 500 to 1,000 Euro (608 to 1,217 U.S. Dollars or 453 to 906 Pounds Sterling). Private areas are not affected. Potsdam, the capital of neighboring Brandenburg province, was turned into a firecracker ban zone in its entirety.

The banger and firework bans are now part of the Berlin Senate’s infection protection rules. According to Interior Senator Andreas Geisel, this is about “minimizing infection risks wherever possible”. He said using fireworks on the street was a health risk. At hospitals, the staff had already reached its limits because of the Corona pandemic. Making them deal with injuries caused by firecrackers as well would be inappropriate, the Senate believes.

“Dear Berliners, stay at home, welcome the new year in small groups and refrain from using fireworks and bangers”, Senator Geisel stated. He said the police could not prevent every single banger from being lit, but they would be prepared and enforce the ban zones.

Only two weeks ago, Geisel had ruled out more firecracker ban zones because there were not enough police officers to deal with them and with other issues on New Year’s Eve. For instance, Corona deniers had wanted to stage a protest on December 31st. Then it looked like they were going to organize their rally on December 30th. Now, on Wednesday, the Senate forbade the protest, because of the pandemic situation.

The Berlin Police Department usually needs help from the Federal Police, which it will likely get again, and from other federal states, when big protests or other events take place. But on New Year’s Eve, the other states will be needing their officers themselves.

Even before Corona hit, there had been demands for firecracker bans because they apparently increase the particulate matter concentration in the breathing air, they cause a lot of trash all of the streets in all cities and because their noise scares animals, including pets.

On New Year’s Eve, the contact restrictions in Germany will not be eased. In most parts, up to five persons from up to two households may gather. Children up to 14 years of age do not count. In Berlin, people need valid reasons to leave their homes. According to the Senate, using bangers or fireworks is not among those.

Germany Reports Record Number of Corona Deaths within One Day

President Steinmeier in Christmas Address: ‘Virus Draws Us Closer Together’