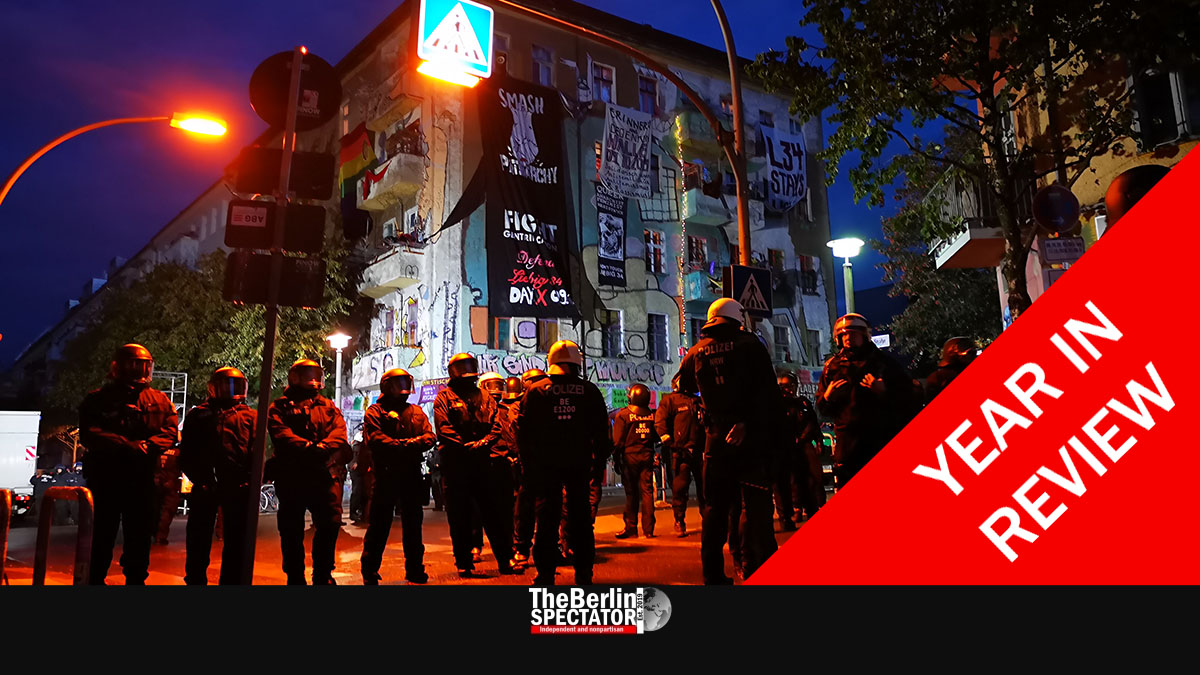 In 2020, Corona obviously dominated the news. Only some events were not Corona-related.

Berlin, December 29th, 2020 (The Berlin Spectator) — There already is a Corona chronology entitled ‘Chronology 2020: Germany and the Corona Pandemic‘. This Year in Review in 12 parts is about events unrelated or partially related to the pandemic.

On October 1st, the Berlin Police Department got its own racism scandal. Two months after Interior Senator Andreas Geisel and Police Chief Barbara Slowik introduced an internal extremism prevention plan, a TV report said 25 police officers had been part of a chat group in which racist and extremist right-wing content had been shared. The BPD confirms.

On October 3rd, 2020, the 30th anniversary of Germany’s reunification was celebrated under Corona conditions, meaning hardly anyone came to the official event. President Frank-Walter Steinmeier did. He said there needed to be a memorial for the peaceful revolution that had led to Germany’s reunification, right in the city center of Berlin.

Victims from Halle and Paris Commemorated

On October 7th, the Verdi Union called for walkouts in public transport. It created a mess in the capital, as usual. And the Federal Audit Office was not exactly happy with the projected costs for an extension of the Chancellery in Berlin, which is supposed to be constructed on the other side of the Spree River.

On the first anniversary of the attack on the Synagogue of Halle, in which two people were murdered, President Steinmeier said a nightmare had become reality. The same applied in Paris, where the teacher Samuel Paty was beheaded on the street by an Islamist terrorist. Two days later, on October 18th, he was commemorated at the French Embassy in Berlin.

Police in Berlin evicted squatters from a building in Liebigstrasse on October 9th, 2020. The apartment block was one of the last symbols of left-wing extremism in Berlin. Hundreds of officers were involved, including many from North Rhine-Westphalia. Some squatters had to be carried out of the building.

Apart from Corona, the most discussed subject in October was BER Airport. With a slight delay of nine years, the eighth world wonder finally opened. Terminal 1 was inaugurated at a moment at which nobody needed it because Corona had just hit the aviation world again.

On October 31st, 2020, Berlin’s Governing Mayor Michael Müller, Brandenburg’s First Minister Dietmar Woidke and Germany’s Transport Minister Andreas Scheuer inaugurated BER Airport in a small ceremony during which Woidke unknowingly was infected with Corona. Luckily, he did not pass it on. BER replaced both Schönefeld Airport and Tegel Airport.