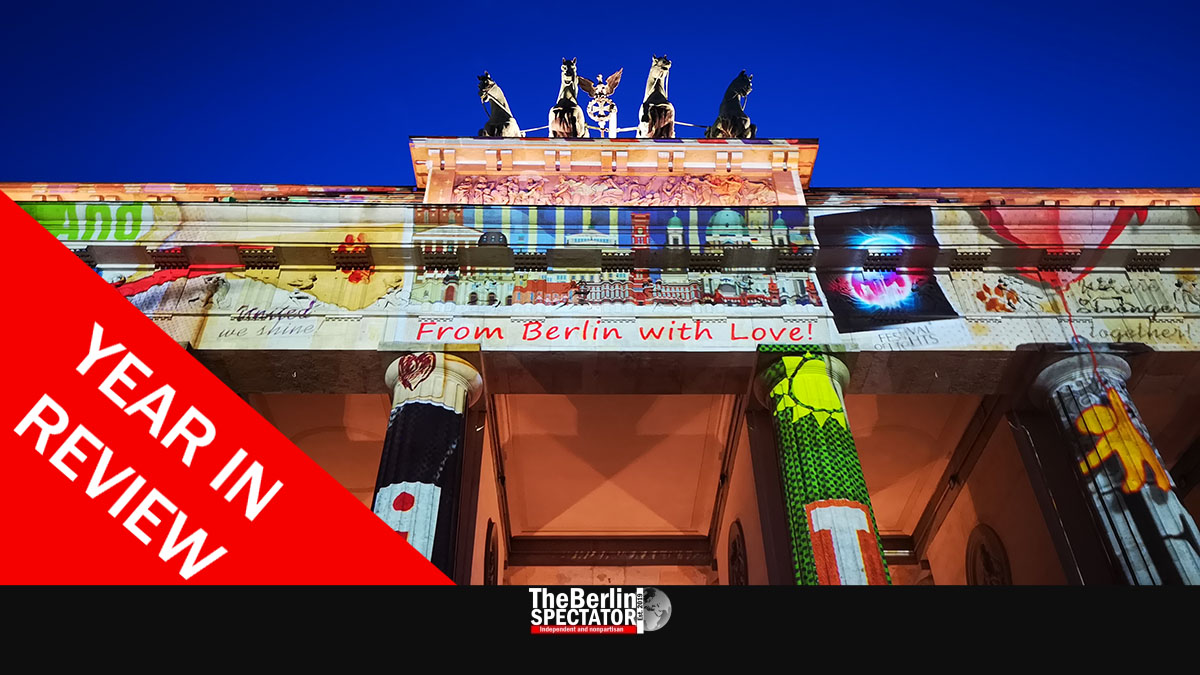 In 2020, Corona dominated Germany and the world. But there were other news items as well. Some were not Corona-related at all.

Berlin, December 28th, 2020 (The Berlin Spectator) — There is a Corona chronology for 2020. Here it is: ‘Chronology 2020: Germany and the Corona Pandemic‘. This Year in Review in 12 parts is about events unrelated or partially related to the pandemic.

Mercedes-Benz invested a huge pile of cash in the new S-Class which the company unveiled on September 2nd, 2020. Decades ago, their flagship was referred to as “the best car in the world” and it was a status symbol. This has not changed. High-ranking politicians are being driven on S-Class limousines. So are dictators, CEOs and superstars. This seventh S-Class generation is proof that Germany still knows how to build vehicles.

On September 2nd, Chancellor Angela Merkel demanded answers from Moscow in regard to the attempted murder of Alexey Navalny, and has not received them until today. Elon Musk showed up in Germany again on the 3rd. He took part in a CDU board meeting and looked into the ‘RNA Bio Reactor’, a product used for vaccines that is being produced by Grohmann, a German company he purchased some three years ago.

Festival of Lights and Unity Expo

Berlin more than doubled its ‘Cops on Bikes’ in September of 2020. Protecting cyclists and making sure they adhere to the rules is their main task. The Festival of Lights mesmerized Berliners. Because it took place outside, this was one of the few cultural events Corona did not screw up. Another one was the ‘Unity Expo’ in Potsdam, at which Germany’s federal states and major institutions introduced themselves in little glass boxes.

After a big fire at the Moria refugee camp on the Greek island of Lesbos, thousands of protesters in Berlin and other cities wanted Germany to accept all asylum seekers from there. The reality was more complicated. Greece did not want to send away refugees from the islands because it feared some could be rewarded for setting the camp on fire. The German government accepted more than 2,000 migrants in the end, in spite of complications within the European Union.

Brandenburg sounded the Swine Flu alarm in September. Chancellor Angela Merkel’s conservative CDU won the state elections in North Rhine-Westphalia. In a video statement for the 75th anniversary of the United Nations, Mrs. Merkel demanded reforms within the organization. She said the U.N. Security Council was deadlocked too often. And the biggest nuclear power fans of the past did not want any nuclear waste disposal site on their turf.

There is a Corona chronology for 2020. Here it is: ‘Chronology 2020: Germany and the Corona Pandemic‘. This Year in Review in 12 parts is about events unrelated or partially to the pandemic.

All of the above can be found in features and articles right here, on The Berlin Spectator.