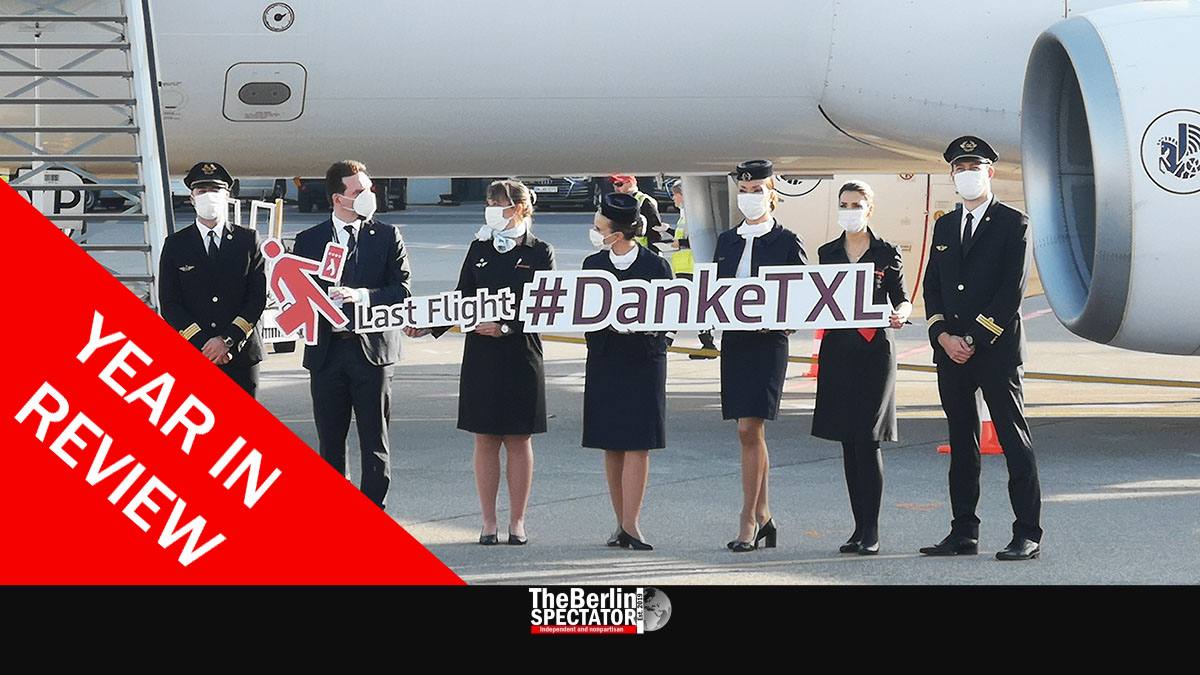 In November of 2020, Germany reacted to the U.S. elections, Berlin closed its last airport, and a whole lot more happened.

Berlin, December 30th, 2020 (The Berlin Spectator) — ‘Chronology 2020: Germany and the Corona Pandemic‘, our most read post ever, deals with all major Corona events in Germany in 2020. This Year in Review in 12 parts is about events unrelated or only partially related to the pandemic.

It happened on November 3rd, 2020, thousands of miles away: Presidential elections were held. President Donald Trump was quick to declare victory. The German government did not like those statements too much. Germany’s Foreign Minister Maas slammed Trump indirectly, by explaining rules that apply in democracies. “Now we need to be patient until the elections are completed properly”, he said.

Best Wishes for Biden and Harris

Six days after the elections, Chancellor Angela Merkel congratulated President Elect Joe Biden. “I sincerely wish him the best of luck and success”, she said. “I would also like to congratulate Kamala Harris, the first female Vice President Elect in your country.” In the following days, Mrs. Merkel repeated her good wishes several times, and she included Kamala Harris in every instance.

Margot Friedländer turned 99 on November 5th, 2020. She is a true Berliner. Her family was murdered by the Nazis before she was taken to the Theresienstadt concentration camp in 1944. After the liberation, she moved to New York with her husband. In 2010, at age 89, she returned to Germany. Here, she visited schools to tell students about her life, on a regular basis.

On November 8th, 2020, the very last flight left Tegel Airport. It had to be an Air France flight to Paris because, sixty years earlier, on January 2nd, 1960, the very first passenger flight to Tegel came from Paris and went back there as well. Tegel was the last airport located in Berlin. All flights to and from the German capital now land at and take off from BER Airport in Brandenburg.

After recent Islamist terror attacks in France and Austria, Germany’s Chancellor Angela Merkel, her Austrian colleague Sebastian Kurz and the President of France, Emmanuel Macron, said they wanted to work on reforms for the Schengen area after an online summit they held. But apart from saying they wanted to secure the outer Schengen borders more, they hardly volunteered any information about their plans.

During a ceremony on November 15th, 2020, the National Day of Mourning, at the Berlin Bundestag, Prince Charles held part of his speech in excellent German. Four and a half years after Britain decided to leave the European Union, he stated the “fundamental bond” between the United Kingdom and Germany would remain strong.

In Berlin, police made arrests in the Dresden Green Vault case, while lions finally returned to Zoo Berlin. In the same city, the SPD disposed of Governing Mayor Michael Müller. He is supposed to remain in office until fall of 2021, but his party wants to go into the September state elections with Germany’s Family Minister Franziska Giffey, who became the main candidate on November 28th, 2020. Since that day, she has to commute between the city state of Berlin and the German capital.