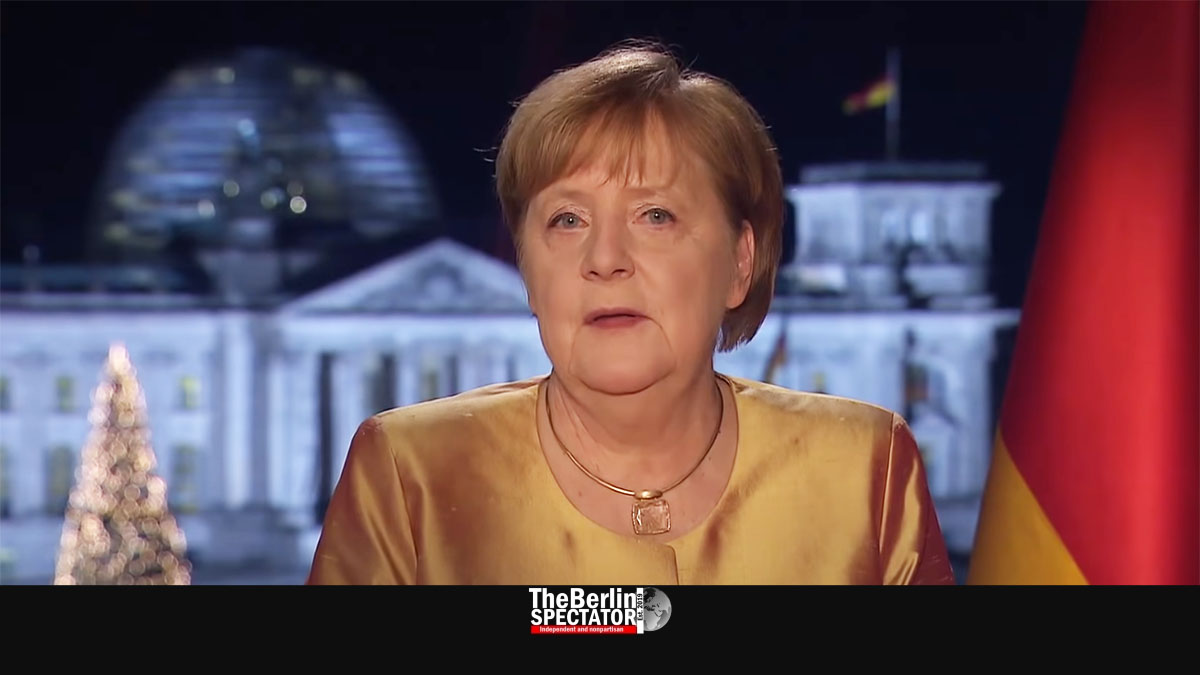 Angela Merkel just recorded her last New Year’s address as Chancellor. She said this winter was hard, and it would continue to be. And she slammed conspiracy theorists.

Berlin, December 31st, 2020 (The Berlin Spectator) — In her New Year’s address, Chancellor Angela Merkel conceded these were hard times, and predicted they would continue for quite a while. According to her, it is up to the people how well Germany would get through the pandemic. “This winter is and will continue to be hard”, Mrs. Merkel stated. Her New Year’s address was pre-recorded. It will be broadcast on German television at 8:15 p.m. on Thursday.

The Chancellor talked about the vaccinations that commenced last weekend. Hope had faces, she said. They were the faces of those who had gotten the first vaccinations: the very old, the caretakers and medical staff, in Germany and in many other countries. Angela Merkel stated more people would be vaccinated every day. More population groups would be covered before anyone who wanted to could get vaccinated.

She announced she would get a vaccination too “once it is my turn”. For now, the most effective way to prevent Corona infections was to follow the rules. Mrs. Merkel said most people in Germany were wearing masks and keeping their distance, and she was thankful. Consideration was important in a humane society.

‘Time to Pause and Mourn’

In what is probably her last New Year’s address as Chancellor of the Federal Republic of Germany, Angela Merkel said many citizens had surpassed themselves without shouting it from the rooftops. She mentioned doctors and other hospital staff as well as employees at local health authorities.

Many others had contributed to enabling life in the pandemic, including employees in supermarkets, people who worked in the transport business, at post offices, in public transport, for the police, at schools, kindergartens churches and editorial offices. The end of the year was also the time to pause and mourn. “We, as a society, should not forget how many people have lost loved ones”, Mrs. Merkel said.

She also slammed conspiracy theorists and their lies. “Conspiracy theories are not only untrue and dangerous, but also cynical and cruel to grieving people”, the Chancellor said. She also stressed that, in spite of the Corona pandemic, other tasks should not be forgotten, including climate protection.

Angela Merkel said this was most likely her last New Year’s address as Chancellor, because she intends to leave the Chancellery, and politics, in September of 2021 after a 16-year reign. Only in case a new government had not been formed by the end of next year, there would be another New Year speech of hers, she explained. The next Bundestag elections are scheduled to take place on September 26th, 2021.

The Chancellor closed her speech by saying never in the past 15 years had Germans looked back to such a difficult year, or looked forward to the new one with so much hope.