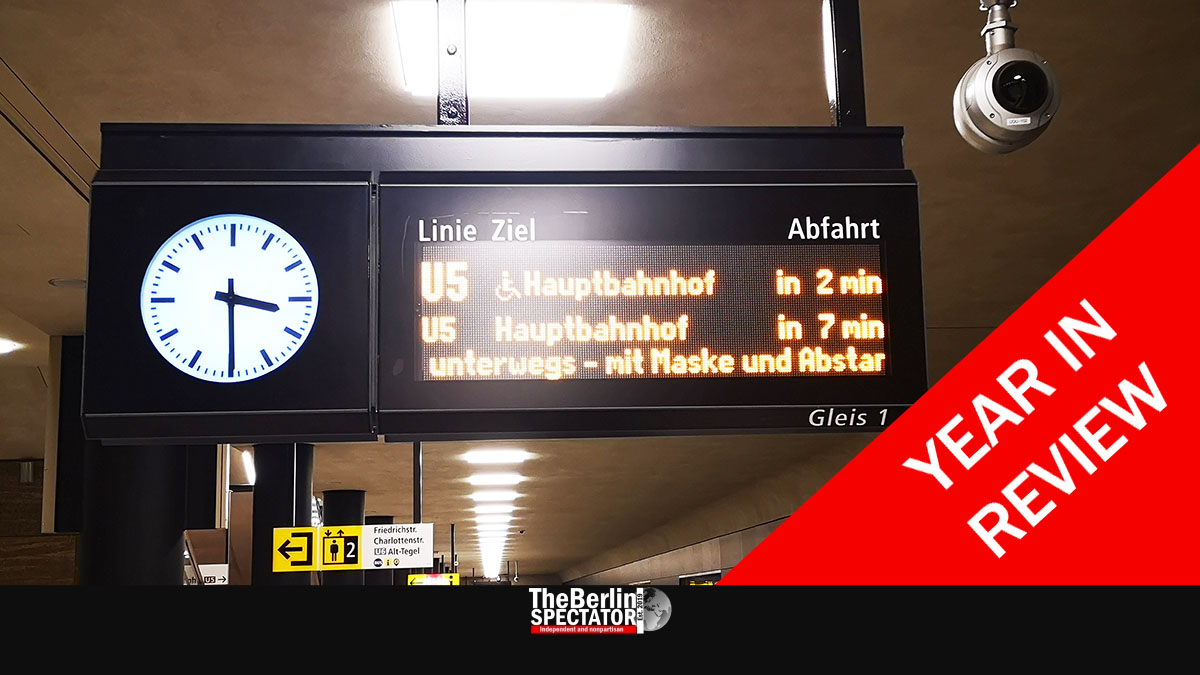 In December, Berlin received a new ‘U-Bahn’ train line. António Guterres spoke at the Bundestag. And a political scandal erupted in Saxony-Anhalt.

Berlin, December 30th, 2020 (The Berlin Spectator) — ‘Chronology 2020: Germany and the Corona Pandemic‘, our most read post ever, deals with all major Corona events in Germany in 2020. This Year in Review in 12 parts is about events unrelated or only partially related to the pandemic.

As if Germany and the world did not experience enough problems, misery and death in 2020, a man steered a car into pedestrians in Trier on December 1st. Five people were killed, many injured.

In Berlin, the new ‘U-Bahn’ train line U5 was inaugurated on December 4th. So far, two out of three elegant new stations, ‘Rotes Rathaus’ and ‘Unter den Linden’, are operational. Building ‘Museumsinsel’ station with its sensational starlit sky was rather complicated. It will open in the summer of 2021.

Another political crisis popped up in eastern Germany. This time it was Saxony-Anhalt. The CDU and the extremist AfD in the state parliament rejected an increase of radio license fees all households in Germany have to pay. At the same time, the CDU’s coalition partners said they would end the cooperation if the CDU sided with the extremists on the issue. In the end, First Minister Rainer Haseloff, who supported the increase of those fees by 86 cents, gave in, in order to prevent a breakup of his coalition. The issue was not voted on.

On the same day, the Secretary General of the United Nations, António Guterres, demanded more international cooperation in this time of challenges at the Berlin Bundestag. He said Corona vaccines needed to be ‘global public good’. He also mentioned the problem of global warning and praised Germany for its policies.

On December 21st, 2020, Stephen Balliet, the Halle attacker, got life in prison. He had tried to kill many Jews at the Synagogue of Halle a year earlier. Since he could not get into the building, he murdered two passersby. The case showed that the spread of hatred, including antisemitism, can indeed lead to violence and murder. Balliet might never get out of prison. In his case, the judge ordered what Germany calls a ‘preventive detention’ after his prison term.

Ahead of New Year’s Eve, Berlin forbid the use of fireworks and firecrackers in 56 ban zones. Other cities introduced similar rules. The sale of such products was forbidden in all of Germany at the last moment. Supermarket chains had already printed their brochures in which they offered bangers and fireworks.