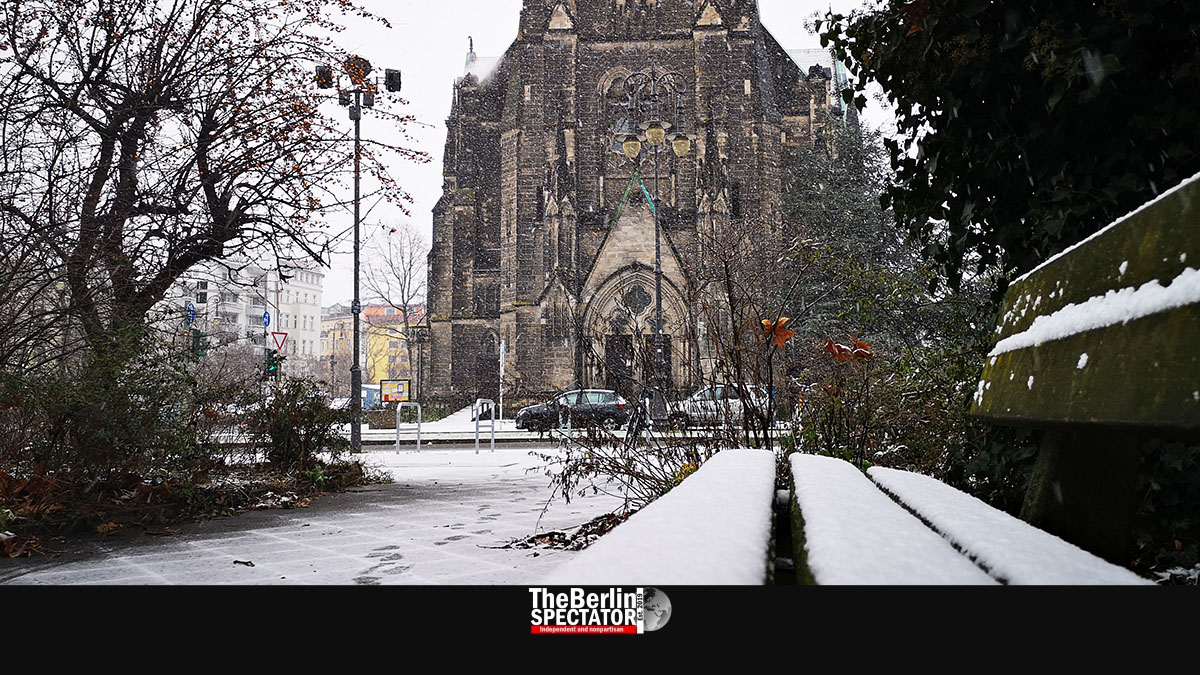 Proper snowfall in Berlin is a rare sight. But it did happen on Sunday. A rather modest layer of snow covered the city.

Berlin, January 3rd, 2021 (The Berlin Spectator) — In Berlin, a thin layer of snow changed the city’s atmosphere on Sunday morning. Next to many buildings in the city center, it melted away quickly, but in parks and in the outskirts it did not.

The city cleaning department started spreading salt on some of Berlin’s 9,500 streets with a total length of 5,400 kilometers (3,355 miles), and on highly frequented sidewalks. But, on Sunday morning, there was hardly any traffic. On ‘Strasse des 17. Juni’, a major street that connects Brandenburg Gate to the Victory Column, the pavement was sort of clean in the late morning.

A few pedestrians with children and dogs took walks in parks. The kids’ excitement and laughter was audible at some locations. Other than that, because of the Corona lockdown and the weather, the city was far emptier than it usually is on Sundays.

Berlin and the rest of north-eastern Germany are not known for excessive snowfall. While there is some of it every year, it usually melts the millisecond it hits the ground. The last major blizzard hit Berlin in 2013. Back then, Berlin had as many as 54 snow days. Ten years ago, in late 2010, a rather big snow mess in all of Germany led to flight cancellations and icy conditions on the Autobahn. In that case, it lasted for almost three months.

The white substance on the streets of Berlin was not washing powder, not powdered sugar and not cocaine. It was actually snow. At Brandenburg Gate, five people were busy shooting photos. At Tiergarten Park, some joggers equipped with headphones did their laps. Hardly anyone was present at Potsdamer Platz square.

Riding bikes through Berlin was possible, but some bike lanes and paths were slippery indeed. At one point, The Berlin Spectator’s reporter almost fell from his velocipede on a sidewalk he should not have been on in the first place. Nobody told him snow is slippery. He did not get the memo.