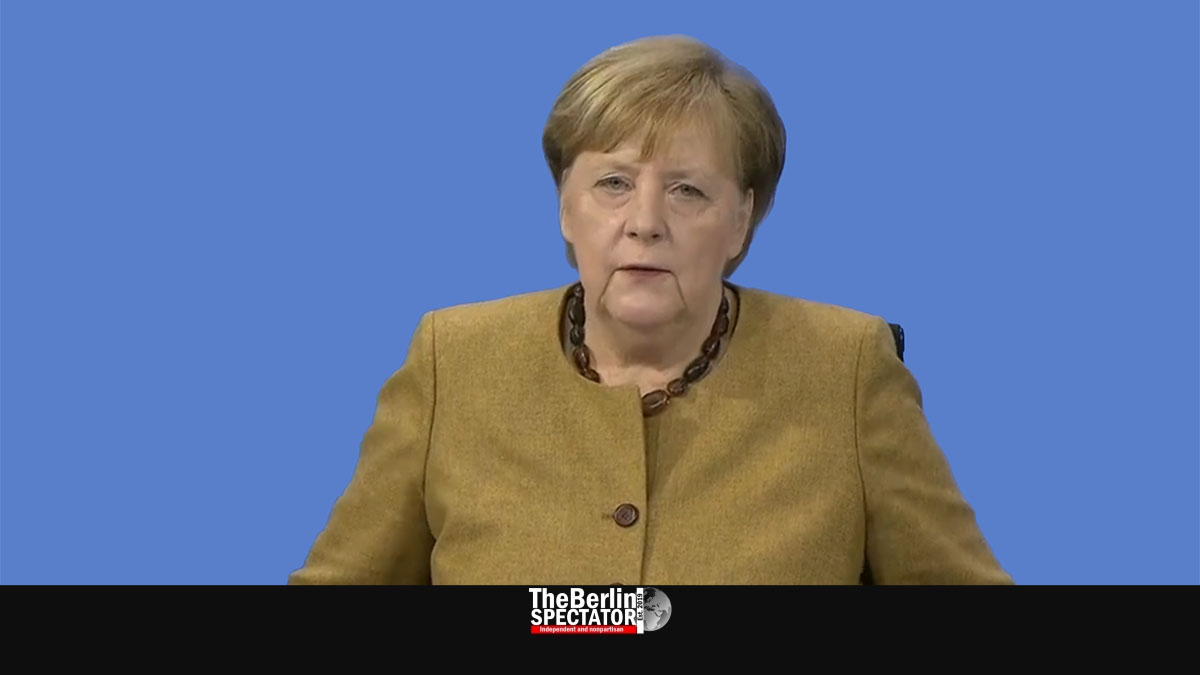 The outcome of yet another Corona conference headed by Germany’s Chancellor Angela Merkel is an extension of the lockdown and a tightening of the contact restrictions. A brand new rule was put in place for Corona hotspots.

Berlin, January 5th, 2021 (The Berlin Spectator) — In Germany, Chancellor Angela Merkel and the First Ministers from the country’s federal states decided to extend the existing lockdown until January 31st, 2021. The contact restrictions were tightened, and there is one new rule that applies to regions with high Seven Day Incidence Numbers.

These are the changes Angela Merkel and the heads of government from the sixteen federal states approved:

> The contact restrictions are being tightened in all of Germany. People may gather with up to one person from another household, or with persons from their own household.

> In regions with Seven Day Incidence Numbers that exceed 200, movement for residents can be restricted to a 15 kilometer (9.3 mile) radius around their home towns, cities or villages. This is the leash rule.

> Schools and kindergartens remain closed. Parents can take ten more days off to care for them. The total number of days employed parents can take off for this purpose is 20.

> Persons who return to Germany from high risk regions generally need to take a Corona test go into quarantine for ten days. After five days, they can end the quarantine by producing a second negative Corona test.

> Retirement homes are supposed to be protected more, with Corona tests. The government will provide more staffers.

The leash rule already applies in some regions in Saxony, which is Germany’s main Corona hotspot right now. Six of the ten counties with the highest Corona Incidence Numbers are located in that federal state. In parts of Thuringia and a few counties in several parts of Germany, the situation is very problematic as well.

In the days leading up to today’s Corona conference, some German media had run a campaign against the German government by accusing it of having failed in regard to purchasing vaccines. On ‘Bild Live’, a TV show on the ‘Bild’ daily’s website, a long list of interview partners criticized the government’s vaccination policy during the Corona conference. So did the show hosts, who kept on talking about an alleged “vaccination disaster”.

At a press conference after the conference, Angela Merkel reiterated the goal was to get the Incidence Number below 50 because local health authorities needed to be able to find the sources of all infections. She also said Germany needed to be careful because of the mutated Coronavirus version which had been identified in the United Kingdom.

There was another reason for a prolongation of the lockdown and a tightening of the contact restrictions, she explained, namely the fact that intensive care units in many hospitals were under pressure. For all reasons mentioned it had been necessary to restrict contacts more. The new restrictions were difficult for people. Still the right decision had been taken. “We are asking everyone to limit their contacts as much as possible”, the Chancellor stated.

The new rule for hotspots, according to which residents may be confined to a 15-kilometer radius, had been listed as an option to prevent day-trip tourism from taking place “in attractive regions”, Angela Merkel explained. Last weekend, photos of crowded skiing locations had appeared in media. More manpower would be provided to retirement homes, she announced. This is where elderly citizens have been infected a lot. Many of them died.

Germany’s head of government also talked about the vaccination policies, after the harsh criticism that had been voiced by her coalition partner SPD and some media. Angela Merkel said the government and the federal states appreciated the mutual order of vaccines within the European Union. The goal to provide 27 E.U. countries with vaccine was right and important. “We do not want national solo action”, she stated. More vaccines would be approved by the authorities.

During the first quarter of 2021, there would be prioritized vaccinations only, the Chancellor announced. This would change in the second or third quarter. Mrs. Merkel said the winter months were difficult, especially with a mutated version of the virus.

At the same Berlin press conference, Berlin’s Governing Mayor Michael Müller said the conference had been difficult because, on the one hand, hard decisions had been necessary. At the same time the question of a perspective had come up. There had been successes in the past months, Müller said. But those had not been sufficient.

Bavaria’s First Minister Markus Söder, who is celebrating his 54th birthday today, said any country that had eased the restrictions had noticed that the virus had returned every time. Corona had to be taken seriously, he stated. Because of the Coronavirus mutations, experiments were the wrong way. “We are betting on safety”, Söder said.