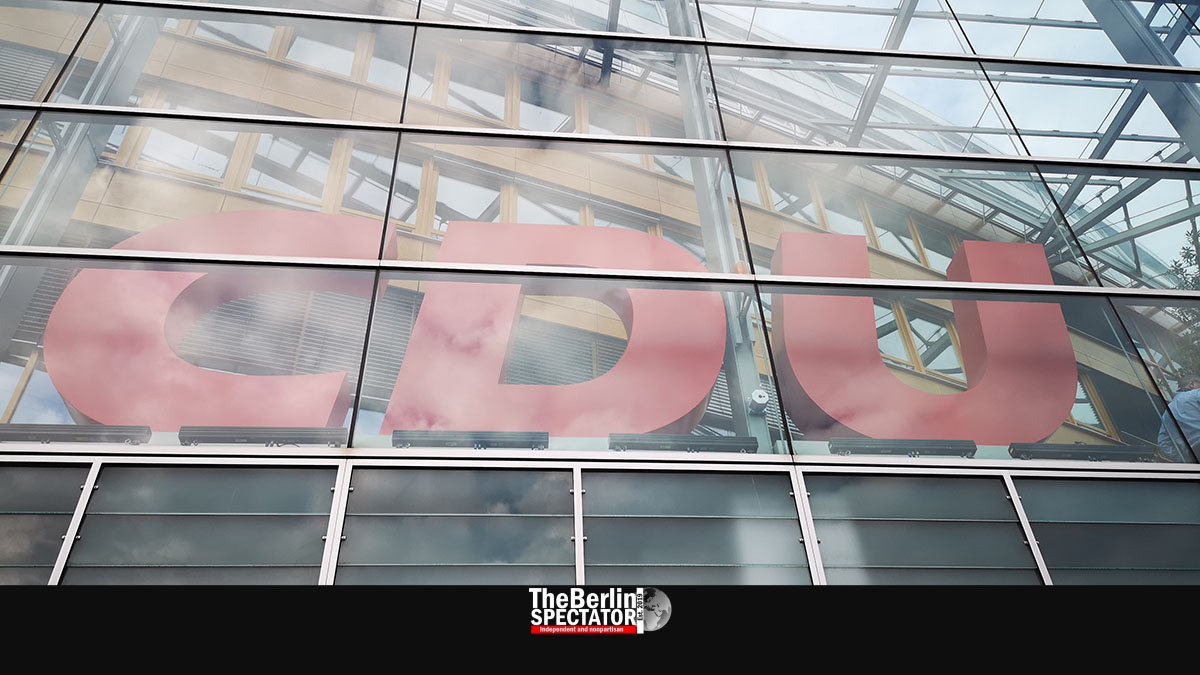 Germany’s last major party, the conservative CDU, is scheduled to vote for a new chairman this week. The winner might become Chancellor in September.

Berlin, January 11th, 2021 (The Berlin Spectator) — On Saturday, the largest political party in Germany, Chancellor Angela Merkel’s conservative Christian-Democratic Union (CDU), will choose a new leader. Originally, this was supposed to happen last year. But the CDU’s big party convention was postponed twice, because the Coronavirus kept on terrorizing the world. Since this is not going to change anytime soon, the party finally decided to have a digital convention.

So far, none of the known Corona mutations spread through the Internet. Neither does excitement, meaning online conventions can be a bit dull. But, this election year, the most important major party in Germany needs to decide about its future and tell voters whom and what to expect.

Things are a little complicated. Angela Merkel stepped down as party leader in late 2018. Her successor, Defense Minister Annegret Kramp-Karrenbauer, failed in a political crisis and stepped down as well, in February of last year. But because of Corona, she kept on working as the CDU’s top administrator. These days are now numbered.

This is about more than just leading a big party. It is about the Chancellery. But things are not that easy, meaning there is no automatism. Whoever becomes chairman of the party will not necessarily be Chancellor. Why would that be? These are the reasons:

> Angela Merkel is a very popular Chancellor. This applies even more since the Corona crisis commenced. Many Germans believe she did an excellent job by taking the right decisions. The voters might not trust her successor as much as her.

> Mrs. Merkel pulled the CDU towards the left, to the political center, over the years. Her successor might reverse her course, depending on who it will be. But pulling the party back towards the right might turn off part of the party’s supporters.

At this moment, both the Chancellor and the CDU’s chairperson are obviously female. But this will change rather soon. It is the men who are about to regain control. The CDU invited the moderator Tanja Samrotzky to host the candidates’ televised debates, in order to make the party look more female. Nice try.

These are the candidates:

The 55-year-old lawyer has been a Berlin Bundestag member since 1994. He had a good career in the CDU. For instance, he was the party’s whip for four years and Environment Minister for Angela Merkel, from 2009 to 2012. When he lost the state elections in North Rhine-Westphalia in 2012, he was fired. Now foreign policy is his main subject at the Bundestag. Röttgen stands for a more conservative CDU.

The 64-year-old lawyer, former MEP and former business man was part of the Berlin Bundestag from 1994 and 2009. For two years, the Merkel foe even was the CDU’s floor leader. In the past years, Merz, who is an economy expert, became rich as chairman of the supervisory board at BlackRock. He would likely pull the CDU towards the right again.

The former journalist will be 60 years old next month. For fifteen years, Laschet was councilman in his home town of Aachen. Later, he became an MEP. For five years, he was Family Minister of the federal state of North Rhine-Westphalia. In 2017 he was elected its First Minister. Armin Laschet stands for continuity. Politically, he is close to Merkel.

When the sun rises above the treetops in Brandenburg, an elegantly dressed gentleman lands his own plane at Schönhagen Airport on a regular basis. His name is Friedrich Merz. He does not like to talk about his wealth, but he does want to lead. In 2018, he lost against Annegret Kramp-Karrenbauer, when he tried to become the CDU’s chairman for the first time. A German tabloid seemed to be running a campaign for him in the past year, by reporting about him in big letters every time he said anything.

Like Merz, Norbert Röttgen does have his followers, but less CDU delegates and other Germans know him, since he does not appear in front of cameras quite as often. The opposite is the case with Armin Laschet. Before the Corona crisis, he was more of a hopeful than he is now. This has to do with questionable performances of his since the pandemic started a year ago.

The CDU is Germany’s pillar of stability. Even some left-wingers acknowledge that Germany needs the CDU. Without it, the country would likely sink into a chaos. While the CDU will probably head the next government, there is absolutely no guarantee. From today’s perspective, a left-wing coalition headed by the Greens is the only other option.

At the same time, the Greens are a potential junior partner in a government coalition headed by the CDU. The FDP is too small, and the SPD is too weak. Besides, the Social Democrats will probably not want to be part of yet another coalition with the CDU. While some CDU members in the eastern federal states do not seem to have a problem when it comes to cooperating with the extremist right-wing AfD, the federal part of the CDU does. There will not be any CDU-AfD coalition. Besides, the radicals are below 10 percent right now.

The CDU’s party convention will take place on the Internet. Only the leadership will be physically present in one of Berlin’s fair halls. A thousand and one delegates are supposed to listen to the candidates and cast their votes online. In order to make sure the vote is legally stable, they will print their ballots after the online vote and send them to their party. A first gathering in Berlin is scheduled to happen on Friday. The actual party convention commences on Saturday.