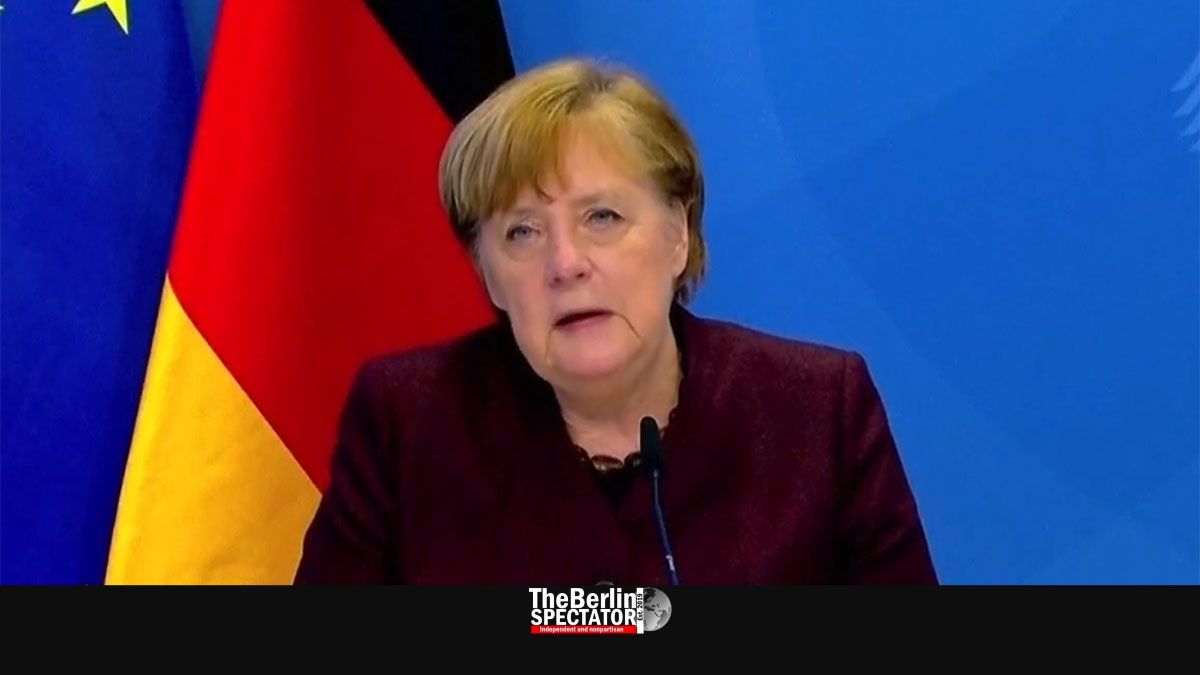 Angela Merkel called for fairness in the pandemic on Tuesday, including a distribution of vaccines to poorer countries. In the meantime, more contagious Corona mutants were confirmed in two of Germany’s federal states.

Berlin, January 24th, 2021 (The Berlin Spectator) — In a video statement for the Davos Agenda gathering of the World Economic Forum, Angela Merkel said there needed to be a fair distribution of vaccines, especially in times of shortages. Mistakes that had been made at the beginning of the Corona crisis had shown that isolationism would not help resolve problems. The German Chancellor reiterated her support for the Covax Initiative. The latter project is speeding up the search for effective vaccines for all countries and supporting the building of manufacturing capabilities, according to the WHO.

Mrs. Merkel said there needed to be “the right proportion between words and deeds”. A multilateral approach was necessary in regard to the fight against the Corona pandemic. Richer states needed to make sure they did not neglect the development cooperation after the pandemic either. She promised Germany would not save in this regard, but rather increase spending.

In her video message, Angela Merkel talked about the crisis that started a year ago, to the day, when the first Corona infection case was confirmed in Germany, and offered self-criticism. “We all made mistakes”, she said. Weak points had become visible in Germany. In this regard, she mentioned the speed of processes in her country. They had become very bureaucratic. A lack of digitization in Germany’s society was another issue. According to the Chancellor, this problem became evident at health authorities and in the education system.

In the meantime, more contagious variants of the Coronavirus are being confirmed in more federal states. According to the Bavarian Health Ministry in Munich, there are nineteen cases of the B.1.1.7 variant from Britain. Eleven of them were confirmed at the ‘Klinikum Bayreuth’ hospital. In addition, one case of the South African mutant was identified in the federal state.

Bavaria’s new Health Minister Klaus Holetschek stated, the state government had acted “quickly, persistently and decisively” once the information from Bayreuth had come in. He said the affected hospitals, including the one in Bayreuth, had been closed. Thousands of staff members were now in quarantine. Further north, in Bremen, two B.1.1.7 cases were confirmed. The Health Ministry released a statement according to which there is one case in the city of Bremen and one in Bremerhaven. One of the patients affected is a nursery school teacher.

The Robert Koch Institute in Berlin released its latest numbers on Wednesday morning. In the past 24 hours, there were 13,202 new Coronavirus infections and 982 Corona-related deaths. Germany’s Seven Day Incidence Number stands at 101.0. By now, two percent of Germany’s population have been vaccinated. While 1.6 million people got the first of two Corona vaccinations required, 283,000 also got the second one.