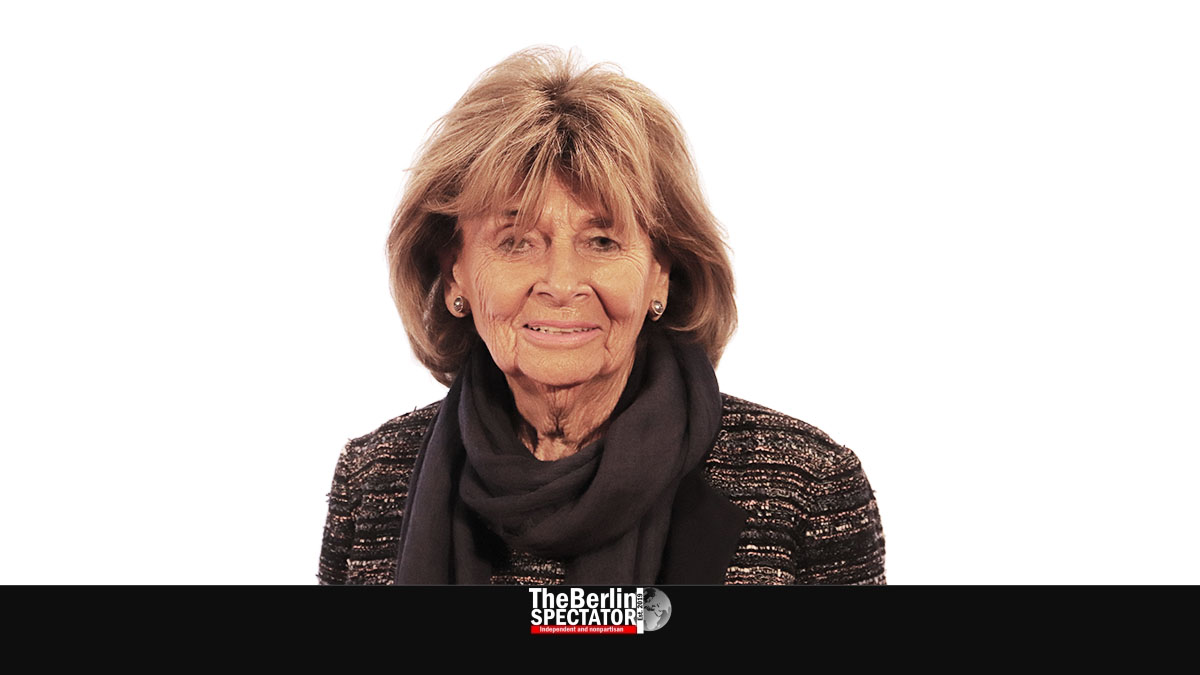 In Germany, the Berlin Bundestag commemorated the millions of victims of the Holocaust today. A survivor, Charlotte Knobloch, had a clear message for the extremist right-wing party AfD.

Berlin, January 27th, 2021. Update: 8:15 p.m. CET (The Berlin Spectator) — Seventy-six years ago today, the Red Army liberated the extermination camp in Auschwitz, where Nazi Germany had murdered the unbelievable number of 1.1 million people. Children, men, women, elderly people were gassed, shot, killed in gruesome “medical experiments” and in other ways. Auschwitz is a symbol for the most terrible crimes in human history.

Holocaust Remembrance Day was introduced in Nazi Germany’s successor state, namely the Federal Republic of Germany, in 1996, by former President Roman Herzog. Later, in 2005, the United Nations adopted a Holocaust Remembrance Day which has been observed by many countries, especially in Europe, ever since. Israel, the only Jewish state in the world, has its own memorial day for Holocaust victims, in spring.

Ahead of today’s commemorations, President Frank-Walter Steinmeier had stated, in spite of the fact that remembrance in the pandemic could only take place virtually, it had not become less important. Prejudice and conspiracy theories needed to be identified and countered with reason, passion and decisiveness.

When the Soviet soldiers had liberated the extermination camp in Auschwitz-Birkenau 76 years ago, they had found big piles of bodies and few survivors who had borne the stamp of death, Josef Schuster, the President of the Central Council of Jews in Germany, stated. The way people had suffered during the Shoah was not comparable to anything else.

He made clear the Jewish community in Germany was terrified and shocked about the behavior of many citizens who had equated themselves with Shoah victims since the Corona pandemic had started. “This pretension and impudence is unbearable to us”, Schuster stated.

At the Bundestag’s commemoration event, its President Wolfgang Schäuble said Jews had lived at the Rhine river long before Germany had existed. The first proof of Jewish life was 1,700 years old. “This anniversary year, we are becoming aware of how diverse 1,700 years of Jewish life are”, Schäuble stated.

He said the German-Jewish history was one of contradictions. There had been phases of tolerance and times of exclusion. There had also been an attempt to extinguish their’ history. The Nazis had denied Jews the right to be human. That way, they had justified their crimes.

Deported by the Nazis

Charlotte Knobloch held an emotional speech about her life in Nazi Germany in which she also shared thoughts about today’s democratic Federal Republic. The 88-year-old Holocaust survivor heads the Jewish Community in Munich and Upper Bavaria. She used to be President of the Central Council of Jews in Germany and Vice President of the World Jewish Congress.

When Charlotte Knobloch told Chancellor Angela Merkel, President Frank-Walter Steinmeier, Wolfgang Schäuble, many MPs and other guests about the day her grandmother was deported by the Nazis, before she was murdered by them, she wept. Eighty-two years earlier, in 1938, she cried as well, when her friends in Munich were not allowed to play with her anymore, simply because she was a Jew. Mrs. Knobloch explained how life became increasingly difficult.

She said she was a proud German today. In the 1960s and 70s, when West Germany had started discussing the Holocaust and coming to terms with its history, the trust Jews had in the Federal Republic had started to grow. The fact that old worries had come back into people’s lives now was difficult for her, Charlotte Knobloch explained. She meant the spread of antisemitism today.

At the end of her impressive speech, she said words were the precursor of deeds. Where there was antisemitism, there was room for other forms of hatred. Then she turned to the MPs of the AfD, a party with strong extremist right-wing tendencies. “Maybe you will continue to fight for your Germany, and we will continue to fight for our Germany”, she told them. “You lost your fight 76 years ago.”

There was a global event too: The World Jewish Congress (WJC) set up a video wall at the former death camp in Auschwitz. Seventy-six years after the liberation, people from all over the world were shown with signs saying “#weremember”. The pound sign is a hashtag which helps Internet users find posts of the same kind.

In Berlin, some smaller events had been announced too. For instance, the group “Omas gegen Rechts” (“Grannies Against the (Extremist) Right”) was going to meet at the German capital’s Memorial to the Murdered Jews of Europe. But many events, including a human chain that usually takes place, were cancelled because of Corona.

Before the Allies liberated Auschwitz and all of Europe by defeating Nazi Germany, six million Jews, half a million Roma and Sinti (Gypsies) and members of other minorities were murdered.