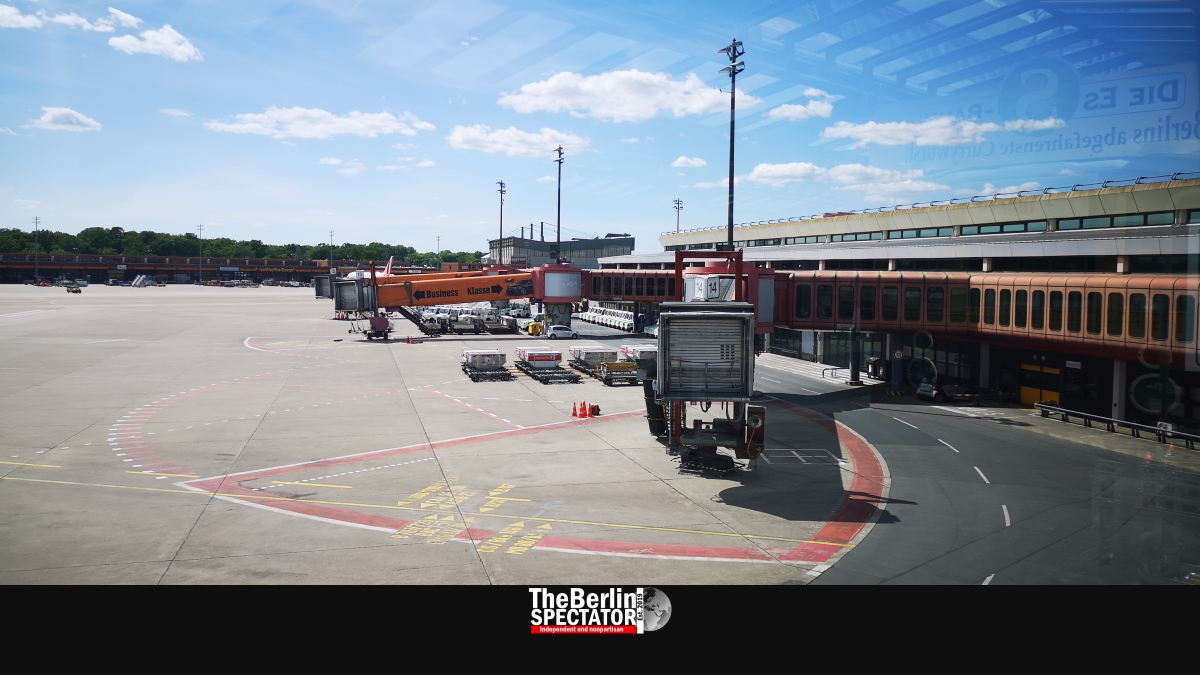 Tegel used to be West Berlin’s main airport. In November, the last flight was waved off. Now, three months later, the owners are auctioning off everything they found on the premises.

Berlin, January 29th, 2021 (The Berlin Spectator) — When it comes to furniture for the modern home, there is nothing more elegant than an eight-seater airport bench in black. Ask any interior designer. They love that stuff and cannot get enough of it. Or how about a giant snowplow (o.k., yes, snowplough) for your driveway?

On November 8th, 2020, the last aircraft left Tegel Airport. It was an Air France flight to Paris. Those sexy crew members even posed in front of their Airbus with a sign saying “Eight-seater airport benches for 50 bucks”. No, they didn’t. The sign said “Last flight. Danke, TXL”.

From 1974 to 1990, Tegel Airport was the pride of West Berlin. After the reunification, it served all Berliners well. Then, in 2012, BER Airport was supposed to replace all major airports in the Berlin Brandenburg region. There was a tiny issue though: BER was slightly delayed. Eight years later, in October of 2020, it opened, and Tegel Airport, which will be turned into an industrial park soon, was shut down.

Then the next issue arose: There were far too many eight-seater airport benches in the building. Want one? Or how about a four-seater? That one will fit into almost any living room. Hey, you guessed it: There are three-seaters too. For those who insist on getting some valuable advice: Those two-seaters are the most fashionable airport benches in the solar system.

So, we got to the best part: All of those airport benches, dozens of them, are up for grabs. Yes, they need to get that stuff out of there ASAP. They are being auctioned off. Airport benches galore! This is the opportunity of the decade. The first bid for the eight-seater is 50 Euro. A nice four-seater bench in grey starts at 30 Euro.

Of course there is more. Flat screens. Truckloads of them. So, you feel like watching the Bourne series, all four parts, on a screen from Tegel Airport? Get it while you can. Or are you tired of staring at your laptop screen? Well, plaster your entire wall with airport screens from Tegel. Your family will not believe where you got them from.

Those who believe airport benches and TV screens are for cowards might want to look at the next item they are auctioning off, namely giant snow removal vehicles. Home owners who have driveways as wide as runways should grab the chance to buy a previously owned giant snow plow (!) mounted to a huge truck, by auction. There is nothing better than flying a snow removal truck. Period.

The auctions are being done by Dechow Auctions in cooperation with their Dutch affiliate Troostwijk Auctions. The benches and screens can be found here, those snow plows (of course they are ploughs in the U.K.) are being auctioned off here. Have a good flight.