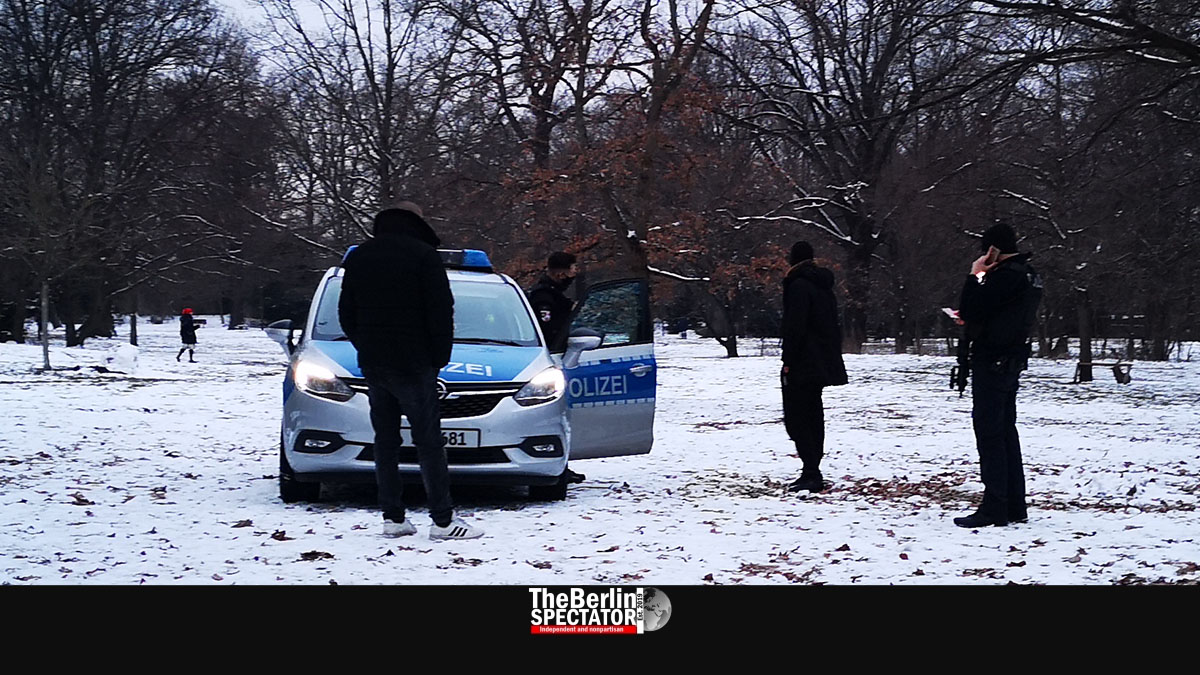 Update February 24th, 2021: Police and prosecution announce arrest of three men aged 24, 24 and 21, who are suspected of murder in the case of the 17-year-old victim.

Police in Berlin are looking for witnesses who were at the city’s Hasenheide park on January 23rd, 2021. On that day, a 17-year-old was attacked there. When he died on Sunday, the homicide division took over the case.

Berlin, February 3rd, 2021 (The Berlin Spectator) — Berlin’s ‘Hasenheide’ park is located in the city’s Neukölln district. Its 470,000 square meters (5 million square feet) provide a lot of greenery, a great playground, a rose garden, a large pond, a zoo for small animals, an open air cinema, a running area for dogs, thousands of trees and huge pastures. In winter, children love sledding on the park’s modest slopes.

Hasenheide is a nice park, but it has its problems. For instance, dozens of drug dealers abuse it for their illegal business every single day. This has been going on for decades. Berlin still does not seem to be able to resolve this issue, probably because the laws are not strict enough. Any drug dealer the police catch has to be released shortly after.

Hasenheide is a multi-purpose park. On nice spring days, families, dog owners and drug dealers share the wide pastures. During the first Corona summer, thousands of people staged parties here because all of Berlin’s clubs were closed due to the pandemic. The police had to end countless parties from June to August. Hardly any party people at the park followed any Corona rules, they used the bushes as bathrooms and left their trash all over the place. Cool temperatures in fall finally ended the party craze.

The latest problem at Hasenheide is violence. On Monday, eight police vehicles raced to one of the park’s entrances, in Wissmannstrasse. At around 4:30 p.m., several callers had reported a brawl at the location. Shortly after, officers found an adolescent with injuries in his face at Columbiadamm, on the southern side of the park.

He told the cops he had been walking down Wissmannstrasse when a group of persons had approached and attacked him. The victim said he had been beaten and kicked, even as he had already been lying on the floor. According to statements made by witnesses, someone fired a shot during the violent incident. It may have been a blank gun. The injured young man told police he had been able to flee at some point. Medics treated him at Columbiadamm.

Police officers spread out in the park to search for persons who may have been involved in the attack. They spoke to witnesses, including drug dealers. By now, a detective squad has taken over the case. The investigation is ongoing. As it turns out, the victim’s injuries are severe. With a concussion and a jaw fracture, he was taken to a hospital on Monday evening.

It gets worse: On January 23rd, a week and a half ago, a passer-by found an injured 17-year-old at Hasenheide Park. He needed to be taken into intensive care immediately because he had suffered a skull fracture. His nasal bone was broken too and he had bruises. Back then, police reported his life was not in danger. This was information the Berlin Police Department must have gotten from medics or the clinic he was taken to.

Just like the other victim on Monday, the 17-year-old was supposedly beaten by unidentified persons. In this case, it happened in the bushes close to the playing area for dogs. The attackers fled the scene when they noticed approaching witnesses. Why the young man was attacked, or by whom, is unclear.

Now the State Office of Criminal Investigations gave the case to its homicide division, because the victim died on Sunday night. On Tuesday, the police asked witnesses who may have been in the area, and who noticed anything suspicious on January 23rd, to come forward. They are also looking for two men who supposedly offered to help the victim after the attack, since they could be important witnesses.

No Culprits, No Motives

Of course, the fact that a murder and another brutal attack took place at Hasenheide within nine days is shocking. At this stage, it is unclear whether the two crimes are related, what led to them or who the culprits are.