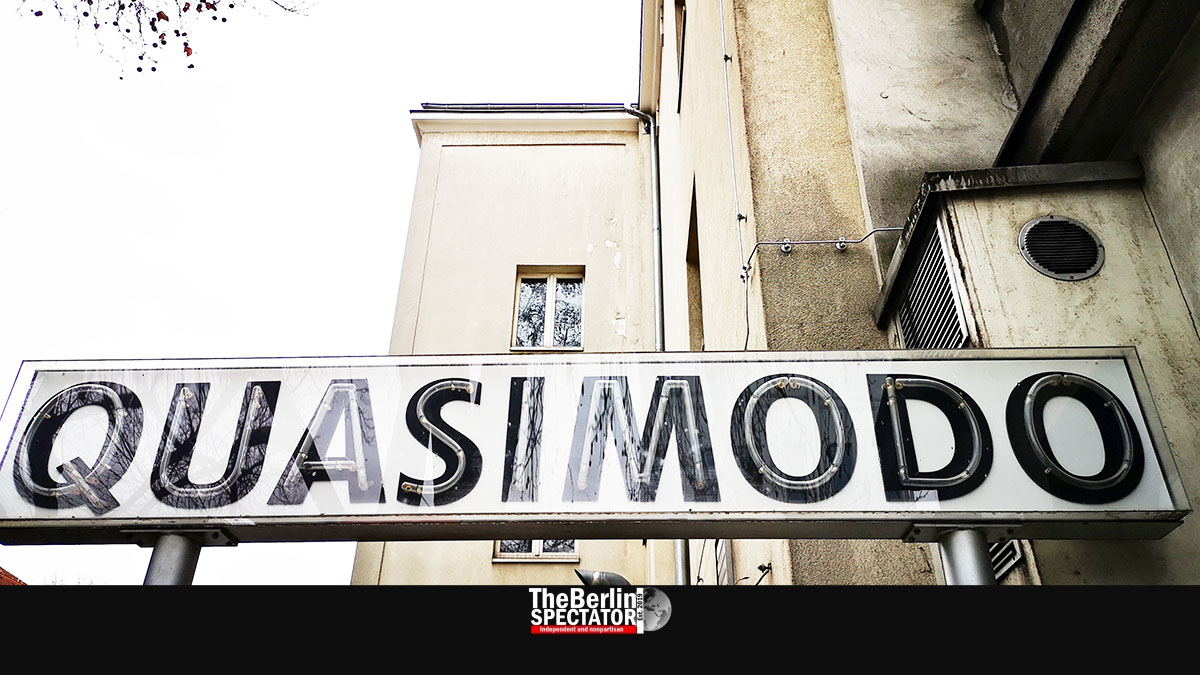 For more than 45 years, Berlin has had an oasis for real music called Quasimodo. Founded by an Italian expatriate, it quickly became one of the most important live music clubs in Germany. It still is.

Berlin, February 4th, 2021 (The Berlin Spectator) — When Giorgio Carioti from the northern Italian port city of Genoa moved to West Berlin in the 1960s, he had a reason. No, it wasn’t the weather. It definitely wasn’t Currywurst. And it wasn’t the fact that the city was surrounded by a big fat Wall. Love brought him here. Giorgio Carioti was a love bird, like so many other expatriates, even today. Love can move mountains. It changes lives.

Berlin and the real music world benefitted from Carioti’s international love story. In 1975, when it all started, West Germany was ruled by Chancellor Helmut Schmidt. The Volkswagen Golf had just been introduced. The last person on the Moon, the late Eugene Cernan, had just returned from there three years earlier.

Giorgio Carioti did not go quite as far. He was a bartender at a pub in Charlottenburg, a rather posh Berlin district. One day, he took over the business and named it Quasimodo. Then he started turning the place into a venue for music of high quality, performed by the world’s Jazz masters. Little did he know that his place would be one of the most important real music oases in Germany, and certainly in the reunified capital known as Berlin.

Everybody mesmerized West Berlin’s jazzy and funky crowds by performing at the Quasimodo. In 1977, two years after its foundation, the venue’s event schedule was already quite full. Jasper van’t Hof, a Dutch piano hero, raised the roof there, in the early days. So did the late Hammond Organ player Jimmy Smith, none other than Dizzy Gillespie, Bobby Byrd, Maceo Parker and Alphonse Mouzon. Did we mention absolutely everyone came to play?

Over the decades, it did not stop. It never did. The Cuban trumpet genius Arturo Sandoval, the late French pianist Michel Petrucciani and the American vibes master Roy Ayers came to Berlin. Guess where they performed. More and more Soul, Jazz-Funk and Acid Jazz acts hit the Quasimodo’s stage too, including bands mainly known by die-hard fans, such as Raw Stylus. Oh yes, that 1996 gig was stunning. They played ’37 Hours in the U.S.A.’. (So, you were in NYC to see your favorite act, and you added the intro to ‘Josie’ to the tune. Brilliant!)

João Bosco and other Brazilian artists spread the most beautiful sounds on Earth at the same venue. Just a year and a half ago, in 2019, the legendary Fusion act Spyro Gyra from New York State came. So did one of the the most funky keyboarders on the planet, namely Jeff Lorber. Dammit, we could go on and on. So, what do we mean to say by all of this? The Quasimodo was always the place to be. Period.

For the New York Times, Stephen Kinzer wrote an article entitled “Berlin Turning Into a Mecca for Jazz” in September of 1990, twenty-five days before Germany’s reunification. It said something about a “subterranean nightclub” which had become “the region’s premier Jazz showcase”. Back then, it was “dark and smoky”. Forget the smoky part, Stephen. But the dark part is still accurate. So is the “informal and appreciative atmosphere”, 31 years later.

In early 2020, it all went to shit. The Corona pandemic messed up the world, the country, the city, the culture, the music and the ‘Quasimodo’. Its new booker Luis Dobarro, a young expatriate from Galicia who has been living in Berlin for ten years, has to fulfill a mission impossible, which is booking artists for gigs that might not take place, just in case they do.

Dobarro is a music lover, collector and DJ who grew up in the music business. He says the business part has to curb the love for specific music at times: “If I would put on stage the acts I want to perform here, just because I love them, we would go bankrupt.” He also explains that, in the Corona crisis, the Quasimodo is in a better position than clubs owned by individuals. While many of the latter are obviously struggling to survive because of the pandemic, things might be a little easier for clubs with a company behind them.

Channel Music GmbH owns the Quasimodo today, both the venue and a mixture between a beer garden and a café located upstairs. They also run the Huxley’s Neue Welt music venue, the Zitadelle Festival, and they are planning on opening yet another venue. The Quasimodo is a survivor. Once the virus goes to hell, the Soul, the Jazz, the Funk, all the World Music and classic Rock will be experienced again.

Berlin is crazy. In pre-Corona times, there used to be a cultural overkill. Besides, audiences in the city of cities are sometimes unpredictable, according to Luis Dobarro. He says the venue organizes concerts that definitely make money, in order to be able to afford those that may not. So, the love for music and business necessities mix. This is the way to run a real music oasis.

The Spanish booker already had to move some gigs to 2022. For instance, the British Jazz-Funk act Shakatak will be there on May 1st of next year. Other artists, such as the Australian Jazz-Rock guitarist Frank Gambale and the Soul voice Martha High, who sang with James Brown for decades, are on standby. Those gigs will definitely take place. The only question is when.

A handful of Jazz and Funk paradises are scattered all over Germany. Hamburg has its Mojo Club and its Fabrik, Leverkusen has its Jazz Fest. Aschaffenburg’s Colos-Saal is another one. So is Munich’s Club Unterfahrt. Berlin’s Quasimodo, the place where music is still music, is part of this list of venues. Where else are we going to see Roachford or Big Daddy Wilson?