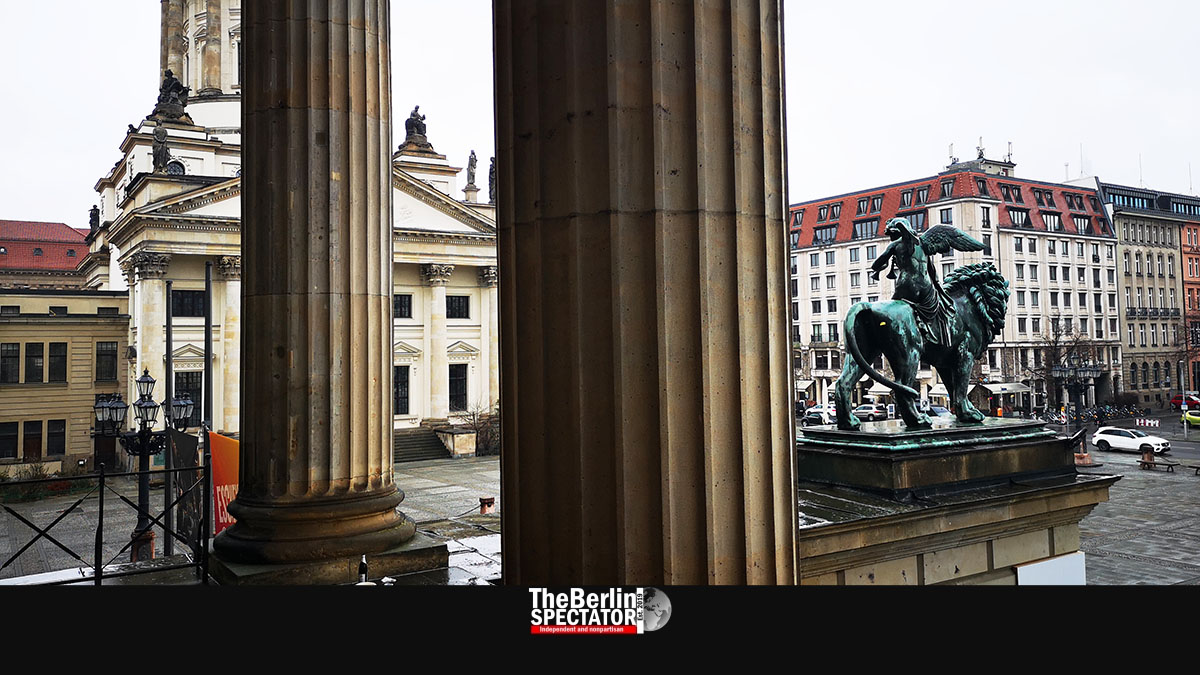 Berlin’s State Monument Office just put part of Gendarmenmarkt under monument protection. This is about the buildings the GDR erected there in the 1980s and the square’s configuration.

Berlin, February 6th, 2021 (The Berlin Spectator) — Gendarmenmarkt is one of the most impressive spots in Berlin. Millions of tourists per year used to look at every detail of it all day long, before they stopped coming because of Corona.

Indeed, there is a lot to see. Many squares in former communist countries like the GDR are empty or ugly or both. Gendarmenmarkt is the exact opposite. It accommodates the following objects:

> The French Cathedral: Frederick the Great commissioned the architect Carl Philipp Christian von Gontard to erect this building of historic importance, from 1780 to 1785. The French Church is connected to the French Cathedral. It was founded in 1672 by French reformed Christians, Huguenots who were religious refugees. They were allowed to settle in Brandenburg starting in 1685. Decades after World War II, from 1978 to 1983, the French Cathedral was rebuilt.

> The New Church or German Cathedral is located on the opposite side of Gendarmenmarkt and mirrors the French Cathedral, meaning it looks almost exactly the same. It was built by the same architect, completed in the same year, namely 1785, and rebuilt from 1983 to 1996 in both the GDR and reunified Germany.

> The Konzerthaus Berlin, formerly known as Schauspielhaus Berlin, is being used as a concert hall. It has been flanked by the German Cathedral and the French Church since Karl Friedrich Schinkel completed the building between them in 1821.

The two cathedrals and the concert hall give Gendarmenmarkt the character it is known for today. But so do the details of this square. They include the Schiller Monument. Inaugurated in 1871, it features several allegories, namely those of history, poetry, philosophy and tragedy.

One interesting detail is the fact that part of the Schiller Monument was displayed at West Berlin’s Lietzenseepark from 1951 until 1986. When a cultural agreement between the democratic Federal Republic of Germany and the communist German Democratic Republic was signed, Friedrich Schiller’s return to his spot, right in front of the Konzerthaus, became possible.

The buildings around Gendarmenmarkt are part of the overall picture too. In the 1980s, the GDR constructed some prefabricated buildings there, which can hardly be identified as such, meaning they are the opposite of what the Germans call ‘Plattenbau’, those ugly apartment blocks that were spread all over the Warsaw Pact’s turf.

Those far more complicated and stylish prefabricated buildings at Charlottenstrasse, and on the other side of Gendarmenmarkt, have their charm as well, and their place in history. That is why they were just placed under monument protection, along with the 1980s design of the square.

“For tourists, but also for many Berliners, Gendarmenmarkt is a historic square from the old Prussia”, Berlin’s State Secretary for Europe Gerry Woop said during a press event on site. “But, actually, the better part of the configuration stems from the 1970s and 80s. By putting it under protection, we are acknowledging this time layer.”

It might take years until Berlin can welcome 14 million tourists per year again. But one thing is certain: Post-Corona tourists will be just as impressed by Gendarmenmarkt as those who visited the German capital before the virus turned everything upside down. In the meantime, the Berliners can look at the spot with pride.