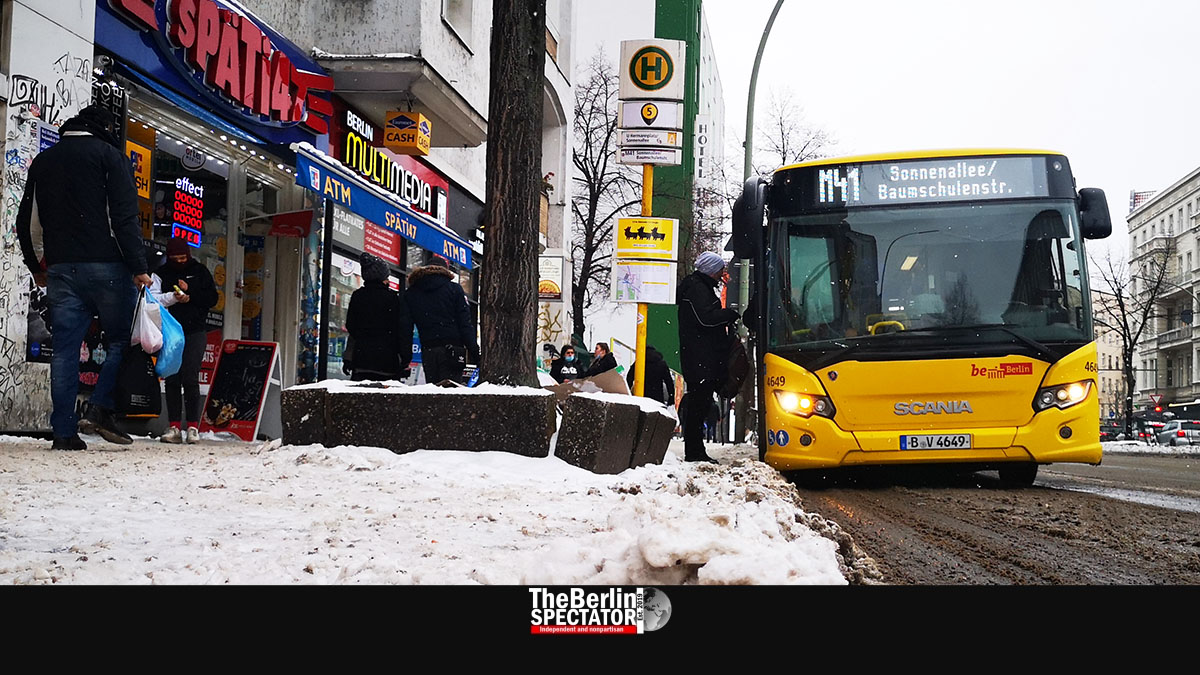 Berlin, and other regions in Northern and Central Germany, will not see temperatures above the freezing point for the next eight days. In some parts, -25 degrees Centigrade (-13 degrees Fahrenheit) were measured last night.

Berlin, February 10th, 2021 (The Berlin Spectator) — The RBB radio and TV network just reminded landlords that they are responsible for clearing the snow and the ice, and for spreading salt or sand, in front of their houses and buildings. The issue is that not all of them follow this rule. As a result, walking around is difficult at many spots in the city, especially for elderly or handicapped persons. The city cleaning department is working on the streets and bike lanes 24 hours per day. Right now, the teams are lagging behind. They have a priority list which they are trying to cover.

With temperatures between -7 and -12 degrees Centigrade (19 to 10 degrees Fahrenheit), putting on bikinis is not really an option in Berlin. It will stay this way for several days. Dog owners and families with kids are among the few who are moving around voluntarily. At Berlin’s parks, kids go sledding on the modest slopes the city has. From the perspective of southerners, those ridiculous hillsides do not even deserve that word. Berlin is mostly flat, but children obviously need to have some fun, especially in times like these.

Hamburg had to make its snow clearing teams work as well, since it snowed a lot last night. More than 800 people in 350 vehicles are working on removing the white layer from the port city’s streets. The bad news is that more snow will supposedly fall in the next 24 hours. There is good news too: With temperatures between -1 and -2 degrees C (28 to 30 degrees F), Hamburg will be warm in comparison to other parts. How about -25 degrees C (-13 degrees F)? That is how cold it was in parts of Central Germany last night, according to the German Weather Service.

In Schleswig Holstein, motorists and pedestrians are trying to get ahead on a new layer of snow. Lower Saxony, North Rhine-Westphalia and other federal states are used to it by now. The conditions on the Autobahn has improved to some extent. According to the police, the situation on the freeways in eastern Westphalia is “stable”, but they believe a new mess might be caused by the temperatures, which are actually falling right now. On the A30, a traffic jam that had slowed down everyone early this morning is dissolving right now. People were asked to bypass the A2, if possible.

Deutsche Bahn is still in blizzard mode. There was no train service between Germany and the Netherlands on Wednesday, and there are hardly any connections to France. Only very few trains are leaving Hamburg towards Frankfurt, Bremen, Münster and Cologne, and just as few go the other way. The routes between Hamburg and Lübeck, and between Hamburg and Kiel, are still not operational. What railway connections between Berlin and Hanover as well as Erfurt, Frankfurt and Munich are concerned, they are operational, but in emergency mode, with far fewer trains. The situation is similar in Leipzig and Magdeburg, where only few long distance trains leave or arrive.