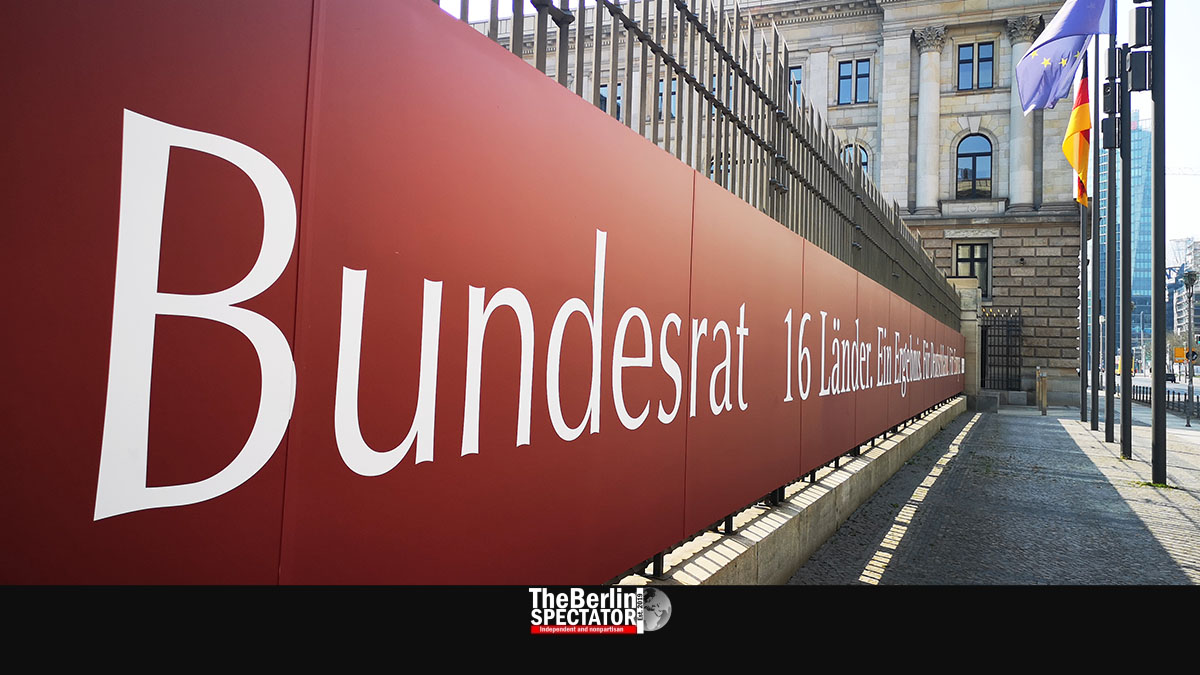 When President Frank-Walter Steinmeier enters the Bundesrat something must be going on. In its 1,000th session, he said the country’s federalism was “many-voiced and diverse”. And he is right.

Berlin, February 12th, 2021 (The Berlin Spectator) — Nothing stands for Germany’s federalism more than the Bundesrat, which is basically the country’s equivalent of the British House of Lords or the U.S. Senate. All of Germany’s sixteen federal states are represented at the Bundesrat. Depending on their sizes, they have three to six seats each.

Things can get pretty complicated at the Bundesrat. Depending on who governs the federal states, certain parties that might be part of several government coalitions can block legislation. A lot of negotiating is usually involved. The state governments often try to avoid a breakup of their coalitions because of arguments on legislation.

In many cases, one coalition partner from a federal state does not vote for or against legislation when the other one(s) do(es) not agree. They usually abstain in these cases. This practice has prevented quite a few drafts from going through. But in most cases things run smoothly, especially when they are being discussed among the state governments beforehand.

Big subjects, such as the digitization or the environment protection, were dealt with all the time, Steinmeier said at the Bundesrat. The legislative body had a whole lot of work all the time. It was a place at which people “work for our democracy”.

Frank-Walter Steinmeier said he had lots of memories that were connected to the Bundesrat, from the times when he had been a representative for a federal state, for the federal government and as a member of the opposition. The fact that he had seen it all from different sides was helping him a lot today, as President.

“The federal makeup of the Federal Republic follows high ethics. But, in everyday life, it can be a challenge at times”, Steinmeier said. There had always been critics who had been citing a “veto game” or an “ungovernability of the republic”. The President explained this was the way things at the Bundesrat had been intended to be.

“Our democracy does not work in spite of different opinions, but thanks to the coaction and the balance of all those legitimate perspectives and interests”, Frank-Walter Steinmeier told the members of the Bundesrat. “Unity in diversity and mutual policies developed by many voices: This arrangement has proven its capacity to act more than once, including — and especially — in times of crisis.”

Steinmeier said tough arguments had been going on between those who wanted to ease the Corona restrictions and those who insisted on sticking to the lockdown, especially this week. “The lockdown is wearing us out. Our nerves are raw”, he conceded. In a situation like this one, arguments could not be avoided. “Our enemy is not located at state chancelleries, pharmaceutical companies, in Brussels or Berlin. Our enemy is the confounded virus.”

Under these circumstances, the Bundesrat’s 1,000th session was not an occasion to pause for a long time, the President accurately said. Important decisions had to be taken. Those were about life and death, literally. “The crisis shows us the strengths of our federal state, but also reveals its weaknesses.” At the end of the day, it was not all about overcoming the pandemic, but also about the future of democracy.