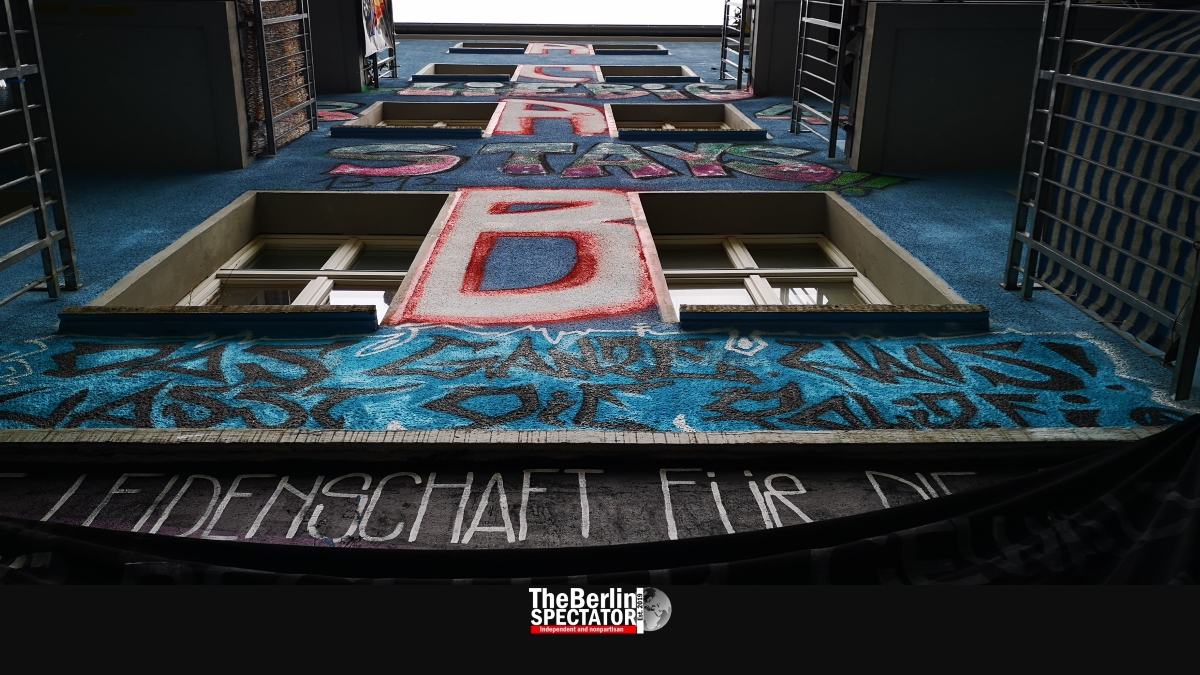 In Berlin, left-wing radicals vowed they would fight the police again. The reason: A fire safety expert is supposed to enter an apartment block part of which they are occupying illegally.

Berlin, February 13th, 2021 (The Berlin Spectator) — It happened at Liebigstrasse 34 in Berlin: Hundreds of police officers in riot gear, many of whom had been sent to Berlin from other federal states within Germany, assembled around an apartment block occupied by squatters. It took them an hour to get access by breaking in doors and windows. Then they removed the squatters from the building, one by one, while defending themselves, and the city, against attacks.

Note: The Berlin Spectator uses words like ‘extremists’ or ‘radicals’ for persons, groups or parties that fight democracy, its institutions or values, on both the far-right and the far-left.

Liebigstrasse 34 was one of the last havens for left-wing radicals in Berlin. Their revenge came promptly. They set vehicles on fire, they are suspected of having attacked a police station, a Green party office and a real estate company’s headquarters with color bombs, stones and pyrotechnical products. This kind of behavior is not new in the German capital. And the big police operation at Liebigstrasse 34 on October 9th, 2020, was not the last one of its kind.

The next problem is already waiting around the corner, literally. For years, the illegal inhabitants in a building located only a few steps away from Liebigstrasse 34, namely in Rigaer Strasse 94, have refused to let any officials enter the premises. They are threatening to start the next street war. The issue: A court just decided to give a fire safety expert access to the apartment block.

To the squatters and their supporters, the fire safety aspect is just “a pretext.” On one of their websites they say this was “an invasion attempt” and the police was planning “a siege”. The authorities’ actual intention was to “annihilate the building” and to “break the anti-capitalist resistance”.

For many years, the fire safety issue, and the general problem with the squatters, was ignored. The district authority procrastinated, for a reason. They wanted to avoid an escalation. Of course, the officials in charge know what those radicals are capable of. Actually, the authorities had a good reason not to do anything: The property situation at Rigaer Strasse 94. Those who claimed they owned the building could not prove they really did.

The latter problem was now resolved. Berlin’s Administrative Court did confirm the owner was legit. According to the ‘Tagesspiegel’, there was a second court decision on the matter. The outcome is that the fire safety needs to be checked, while the Berlin Police Department needs to protect the expert who does. He — or she — will not just have to enter the staircase, but also some apartments. This resolves the legal issue that had prevented anything from happening.

Berlin’s Interior Senator Andreas Geisel now wants to move quickly. He said the Friedrichshain-Kreuzberg district and the Police Department would now agree on a mutual approach. This was about the enforcement of fire safety regulations. So, there are no excuses left which the Green district officials or the center-left Berlin Senate could hide behind. Unless the squats agree to open ‘their’ building for the fire safety check voluntarily, which they most likely will not, another street war might erupt rather soon.