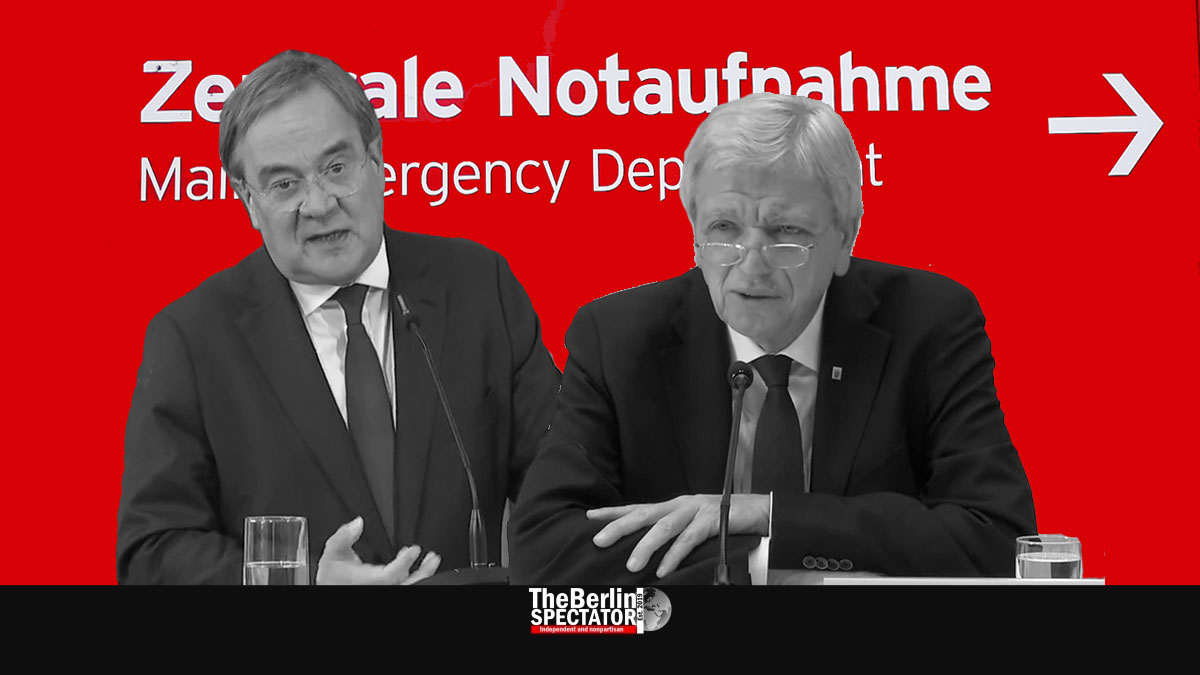 In Germany, several First Ministers started a discussion about the country’s Corona policies. Some are even questioning decisions they took themselves, at the last Corona conference with Chancellor Merkel.

Berlin, February 17th, 2021, Update 11:46 a.m. CET (The Berlin Spectator) — A sense of relief is spreading in Germany. After months of horrific news about rising infection numbers, the situation is clearly improving. The Seven Day Incidence Numbers in three of Germany’s sixteen federal states, namely in Baden-Württemberg, Berlin and Rhineland-Palatinate, are already below 50. They are approaching the level they are supposed to have, which is 35 or lower.

Only one state, Thuringia, is above 100. In Bavaria, Hamburg, Hesse, North Rhine-Westphalia and Schleswig-Holstein, the Incidence Numbers are between 50 and 60. If things continue developing this way, the target numbers will be reached soon. Of course there is one problem: the word ‘if’. As always, there are open questions:

> If Germany reopens its non-essential retail businesses, will the numbers increase again?

It was a foregone conclusion that people, including Berlin politicians, would loose their patience at some point. Especially members of the opposition at the Berlin Bundestag say there was no proper “reopening strategy”. Well, complaining is the opposition’s job. But Merkel’s own people are turning against the government’s Corona policies as well, including some of those who put them in place with the Chancellor.

Angela Merkel uses the Seven Day Incidence Number as a guide. If it drops down to a level below 35, more businesses may open. Otherwise, the ongoing lockdown will be prolonged further. In Hesse, First Minister Volker Bouffier suddenly wants to include “more parameters” into the discussion. Saxony-Anhalt is working on a draft which would include the reproduction number and the number of Corona patients in hospitals into the decision making processes.

On Tuesday night, Armin Laschet, the First Minister of North Rhine-Westphalia, criticized the latest decisions he was part of himself, by saying people would be unnerved by changing target values in regard to the Incidence Number. Both Bouffier and Laschet are Merkel’s men. Laschet even heads her party, the conservative CDU. Other party colleagues say there needed to be a “reopening strategy”, even though there already is one.

The original idea was to get the Seven Day Incidence Number down to below 50 and keep it there. In order to give the numbers some room, the strategy is to get them down to 35. The overall policy has actually not changed. Chancellor Merkel, who is a scientist herself, has explained the approach over and over again: At an Incidence Number of 50 or below, local health authorities can manage to trace all Corona infections back to their source, which is vital — in the truest sense of the word — for keeping the pandemic under control.

This might become even more difficult soon, experts fear. According to Health Minister Jens Spahn, the new, more aggressive Coronavirus mutations already account for 22 percent of all new infections.

In the meantime, Lower Saxony stopped using the vaccine manufactured by AstraZeneca temporarily. According to reports by German-language media, the issue was that many hospital employees in Braunschweig and Emden had complained about side effects. In Leer county, the same measure was taken, but reversed again after a few hours.