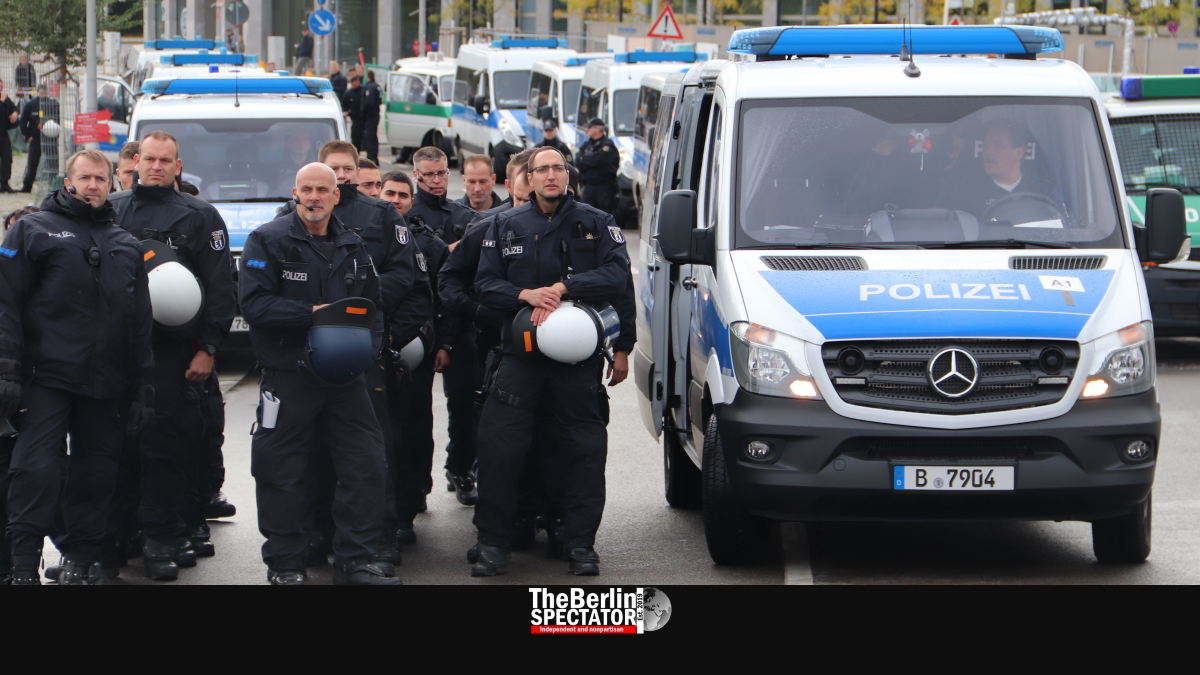 In Berlin and Brandenburg, hundreds of police officers raided many objects and arrested two members of a family clan. Arms trafficking is only one of the accusations against the suspects.

Berlin, February 19th, 2021 (The Berlin Spectator) — On a regular basis, the German police target the clans. This time, they got one of them where it hurts. Encrypted chat messages the French police obtained were passed on to the German authorities. Their content made the Germans act rapidly. Many real estate objects were raided on Thursday.

The Berlin Police Department, officers from Brandenburg, the Federal Police and officials sent by the Federal Criminal Police Office, including elite units, were part of the large operation that started early in the morning. A total of 500 officers were part of the operation. Two persons, a 22-year-old man and his 44-year old accomplice, were arrested.

At two locations in Brandenburg, and 20 in Berlin, as many as thirty search warrants were enforced. According to the office of Berlin’s Prosecutor General, the operation took place in several parts of the German capital, including the districts Moabit, Neukölln, Reinickendorf, Schöneberg, Spandau and Wedding. In Brandenburg, a warehouse and another object were raided and searched.

The large-scale police operation targeted an Arabic clan which keeps on appearing in the headlines, and persons the prosecution calls “Russian nationals of Chechen origin”. Between those two groups, some kind of a street war had erupted in the fall of last year. A German suspect is implicated as well.

The list of accusations is quite long in this case. They include drug trafficking, arms trafficking and, separately, dealing with weapons of war. Chat conversations on an encrypted service called Encrochat got into the hands of French investigators, before they made their way to Germany. By now, police departments in Europe have software programs that can decipher encrypted content. In those chats the authorities monitored, the suspects talked about 20 machine guns, among other things.

Assets that belong to the three main suspects were confiscated. The authorities said this was about 300,000 Euro (362,823 U.S. Dollars or 259,624 Pounds Sterling). One of the men who were arrested allegedly ran a “cocaine taxi” and a an illegal Cannabis plantation.

In Berlin, Interior Senator Andreas Geisel stated the police and other authorities were very determined in the fight against organized crime. The authorities were not going to retreat. Geisel vowed, the fight would be fought, no matter who controlled the crime. He said there had been as many as 240 operations against criminal family clans in 2020.

Generally speaking, Berlin and North Rhine-Westphalia are the two federal states affected by clan crime the most. While the German authorities seemed to ignore the clans’ activities for a long time, they became very active a few years ago. The Berlin authorities have confiscated many real estate objects and fancy vehicles since their started their ‘all-out war’ against this kind of organized crime. They have arrested dozens of persons.

In Berlin, the Prosecution believes the French chat protocols will uncover even more “very serious crime”. Part of the family clan implicated in the crimes mentioned is also suspected of being involved in the Green Vault heist in Dresden. Since November, four out of five individuals who may have been part of it were arrested. The fifth one is still at large. The street war in Berlin has to do with the fact that the Chechen gang has been trying to get a share of the criminal business the family clan is into.