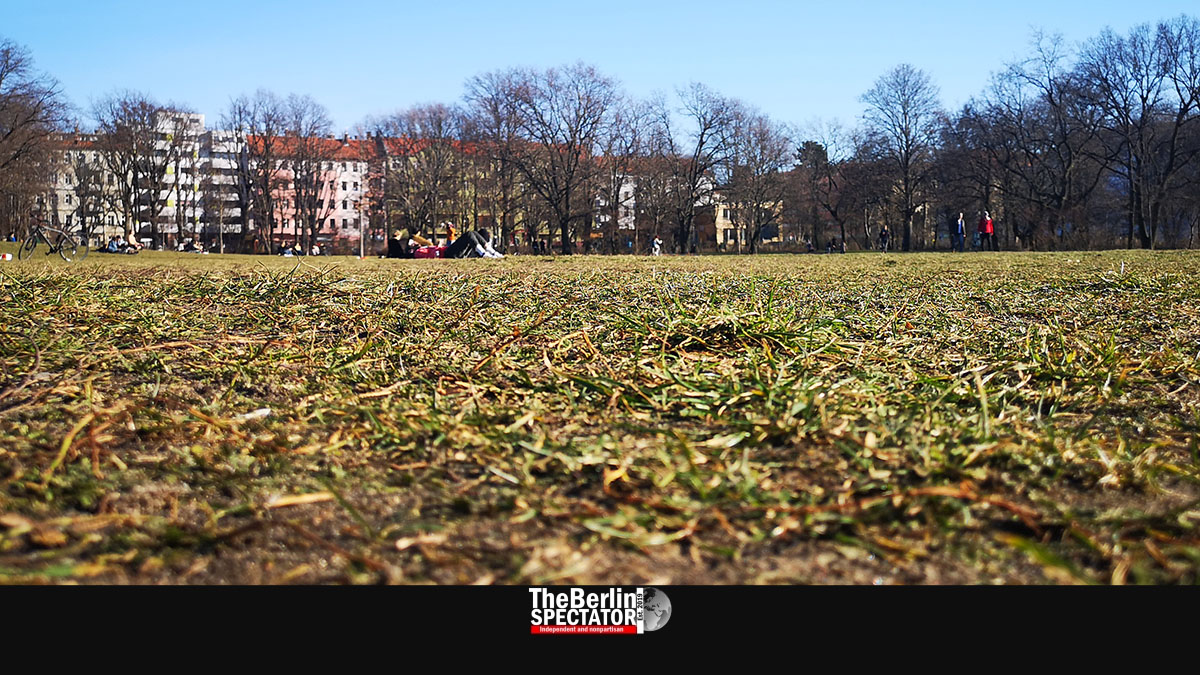 Many residents of Berlin were outside this afternoon, on a warm Sunday. The parks were crammed. And there was a problem, as always.

Berlin, February 21st, 2021 (The Berlin Spectator) — In Berlin, thousands of residents came out their homes, which they had been confined to for months, in order to enjoy the warmest day this year, so far. The solar system’s star, a.k.a. the Sun, provided a lot of light, Vitamin D and warmth. The German capital’s residents had little reason to complain.

According to the German weather Service, up to 16 degrees Centigrade (61 degrees Fahrenheit) were expected on Sunday afternoon, but it felt a lot warmer in the sunlight. Many people took off their jackets and enjoyed part of this spring-like day in t-shirts and blouses. Saturday had already been enjoyable, but it was even warmer on Sunday.

At Hasenheide park between Berlin’s Neukölln and Kreuzberg boroughs, the playground was crammed. Thousands of people from the neighborhood, among them many families with children, populated the park. Some Berliners seemed a little pale after three months of winter and lockdowns.

The park’s pastures were still moist and muddy. But the residents did not seem to mind much. They sat on blankets and enjoyed what they had not had since September of last year, when it got cool rather quickly. Some Berliners played soccer with their kids, others just walked around or consumed pizza at the park.

Of course there was a problem. At some spots, there were too many people. On one pasture, around 25 men gathered. Since they definitely were from many different households, what they did was forbidden. According to the Corona rules, people may gather with up to one person from a different household. There is an exception for single parents: They may bring along their children in all cases. The Corona lockdown is valid until March 7th, 2021, but it might be prolonged yet again.

Because of the fact that many Berliners seemed to ignore the contact restrictions on Saturday, the Berlin Police Department was going to remind residents in parks to keep their distance, to gather with people who live with them, and not to leave their homes without a valid reason. This is another rule that applies. Sitting on a muddy pasture in the park is not a valid reason, according to the rules, but taking a walk is.

For violations, the police can charge up to 500 Euro (606 U.S. Dollars or 432 Pounds Sterling). But, in many cases, police officers generally just seem to remind people of the rules without making them pay fines, as long as they react in a positive way. On early Sunday afternoon, there was no police at Hasenheide park.

According to forecasters, the coming week will bring a lot of sunshine and warmth to Berlin. Temperatures may exceed 20 degrees Centigrade (68 degrees Fahrenheit). On Monday, they are supposed to be a bit lower. It will be a little cooler in Hamburg. Clouds might appear. In Cologne, the weather will reportedly be just like in Berlin. Not a single cloud will cover the sky in Munich until Thursday, meteorologists believe, at temperatures of up to 17 degrees C (63 degrees F).