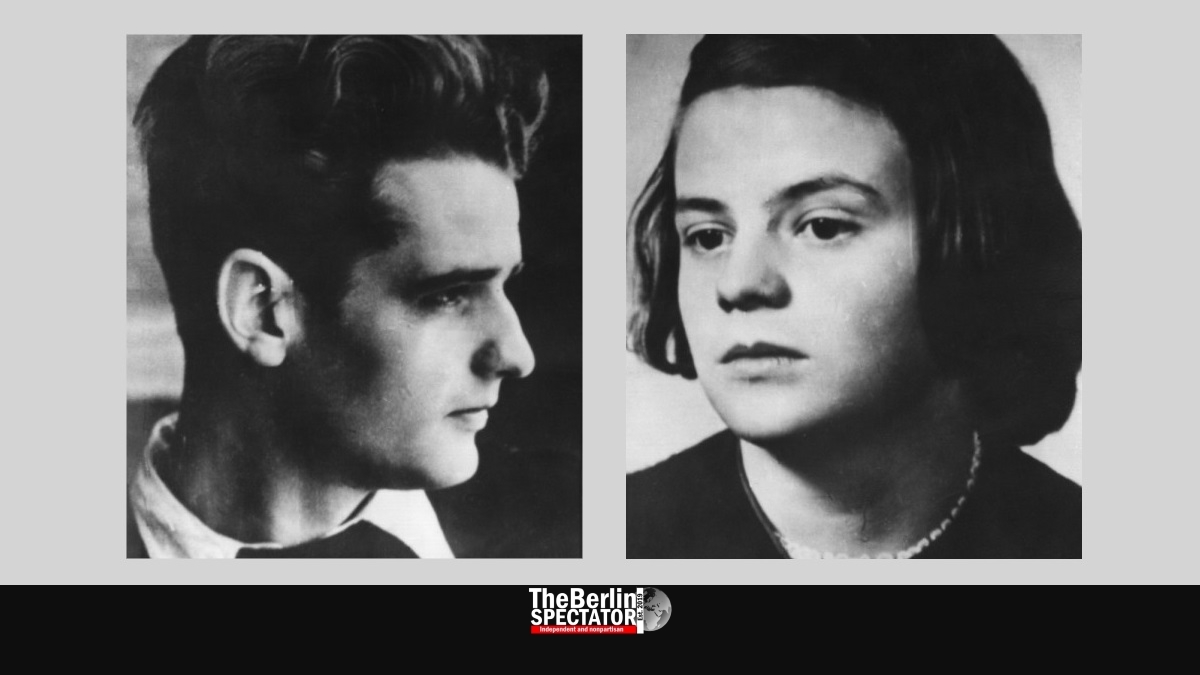 Seventy-eight years ago today, Sophie and Hans Scholl were executed at Stadelheim Prison in Munich. Their “crime”: They had spread the truth about Nazi Germany and the war on leaflets.

Berlin, February 22nd, 2020. Update: February 22nd, 2021 (The Berlin Spectator) — In Germany, schools are named after the Scholl siblings, and there is a good reason. Sophie and Hans Scholl were resisters. They authored and distributed leaflets against the Hitler regime and the war. And gave their lives for freedom.

Getting the Word Out

Their resistance group, the White Rose (‘Weiße Rose’) was made up of students from the University of Munich. While there also were resisters who tried to kill Adolf Hitler and other high-ranking officials in Nazi Germany, the Scholls and their fellow campaigners concentrated on getting the word out, the message against Nazi terror and for freedom.

In 1943, Sophie Scholl was 21, her brother Hans was 25. He had been part of Hitler’s youth organization. Over the years, they learned what was going on at the front lines. At some point, they heard of systematic murder at Nazi Germany’s concentration camps.

On one of their leaflets they said Hitler had deceived the German people. The tyranny in the Reich was unacceptable and the worst the German people had ever been confronted with. It was time to resist.

After the students were murdered by the Nazi regime, the content of that leaflet was reprinted by the British, in German. Thousands of copies of that new leaflet were dropped all over the Reich from aircraft. Many Germans had the opportunity to read what the Scholls and their comrades had written.

It happened on February 18th, 1943. Sophie and Hans Scholl were caught distributing hundreds of copies of one of their leaflets at the University of Munich by caretaker Jakob Schmid. He told the Gestapo. As a result, Sophie and Hans were arrested.

Only four days later, on February 22nd, 1943, exactly 78 years ago today, the notorious Nazi judge Roland Freisler convicted and sentenced them to death. Both were decapitated under the guillotine that same day, along with Christoph Probst, one of their comrades.

The Scholl siblings were among the few freedom fighters who risked everything, since they knew the war, the injustice, the murder and genocide spread and pursued by the German regime needed to be stopped. To them it was a question of conscience.

Today, there are not just many ‘Geschwister Scholl Schulen’ (‘Scholl Siblings Schools’) all over Germany, but also faculties which carry their name, as well as memorials, including a plaque at the University of Munich. Many streets and squares were named after them too.

Remembering Sophie and Hans Scholl and what they stand for is becoming even more important because of the alarming rise of antisemitism and other forms of hatred in Germany and elsewhere.