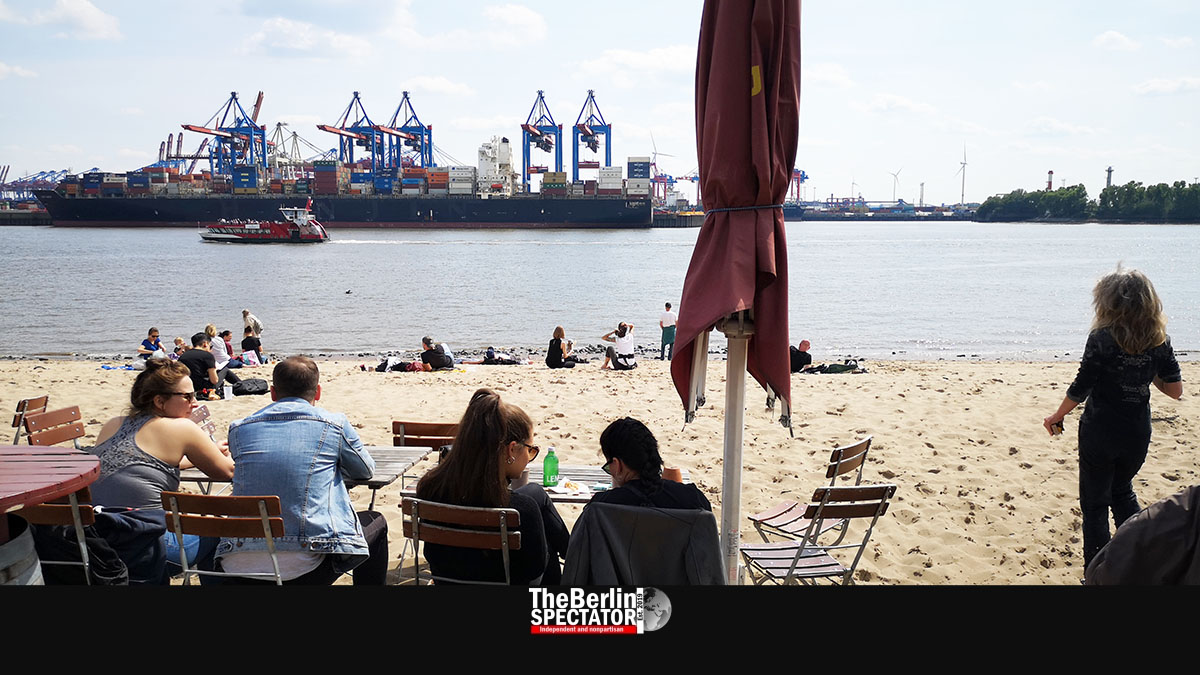 Travelers who head north in the western part of Germany will hit Hamburg sooner or later. It’s usually sooner. And they will find the country’s most beautiful city.

Berlin, February 17th, 2019. Update: February 28th, 2021 (The Berlin Spectator) — Hamburg is proud of many things, including a building which is only four years old. It may not have been cheap, 789 million Euro (902 million Dollars or 683 million Pounds) to be exact, but it is worth every Cent. The Elbphilharmonie (Elbe Philharmonic) is an unbelievable sight.

At sunrise, the sparkle in its windows and its entire aura silence even its former critics, those who complained about the building’s price tag, the duration of its construction and what not. Audiences who have heard their share of Vivaldi and Mahler in the Elbphilharmonie‘s largest concert hall say attending concerts here was awesome, and the sound quality sublime.

Just entering the building erected right in the Elbe river is a lasting experience, even without Beethoven or Ravel sounds. Any visitor will realize that the attractiveness is not limited to the outside and that this venue is actually worth several times the pile of money invested. Beauty used to be in the eyes of the beholder. Not here.

The view from the Elbphilharmonie is just as stunning as the view of the beautiful building itself. Spending a night at The Westin Hamburg, located right inside the elegant structure, is probably even better than attending concerts there, because of the breathtaking view of the harbor and the city from its more expensive suites. So you want big ships to sail straight into your hotel room? Rent a suite.

But the Port of Hamburg was a breathtaking sight even long before the Elbphilharmonie was planned or built. Watching ships move by at Landungsbrücken, especially at sunrise, is priceless. Ferries the rides with which are included in day tickets for the public transport system can be taken here, or boats which do harbor tours for tourists.

In order to cross the Elbe river without getting their feet wet, people in Hamburg use several inventions. So-called ships take people across the river. Some use another convenient thing called bridges. And there are tunnels. But this one, the ‘St. Pauli Elbtunnel‘, is special.

At Landungsbrücken, elevators for pedestrians, bikes and even cars are available. Those who want to get a good idea of how deep they are descending into the ground can also walk down the staircase before entering one of the two tubes. Yes, this old tunnel is a great object to take photos of. And it does have a light at the end of it.

It is all about water in Hamburg. Following the Elbe river westbound by car or S-Bahn (city train) makes a lot of sense. In Hamburg’s Othmarschen borough, expensive villas in neatly trimmed, huge gardens are nice to look at and even nicer to live in. But prices for a picturesque lot right at the riverbank amount to seven-digit figures, while just looking at them from the train does not cost a single dime.

Some 12 kilometers (7.5 miles) west of Landungsbrücken, the Quarter of Stairs (‘Treppenviertel‘) in Blankenese is a truly wonderful spot. Walking around here, through tiny paths and up and down the only hills Hamburg provides is more than nice, especially when it does not rain.

The next thing to do would be to look at those little houses in this area from the Elbe beach, and to shoot millions of photographs of the same. In the river itself, both small and huge ships can be seen moving back and forth. This view is better than the movies.

Bathing in the Elbe

Yes, Blankenese is one of the nicest places in Hamburg. Just try not to think of the fact that the Elbe is being used as a cooling system by the Brokdorf nuclear power plant located some 50 kilometers (31 miles) down the river.

Getting tired of walking? Use the Bergziege (‘Mountain Goat’), a tiny bus which will take you back to the S-Bahn train station. Yet another activity would be to move back towards the city center. About half way there, Övelgönne provides another nice Elbe beach, restaurants and pubs. It might sound weird but in summer people actually bathe in this river.

So far, this was all about the Elbe river, the port, the old tunnel and the beaches. But what about the Alster? The latter is both a lake and a small river. At Jungfernstieg, right in the very city center, real Hamburgers do not really have eyes for all the beauty anymore, unless they just returned to their nice birth city for the first time in a decade, like the author of these lines.

Looking across the Binnenalster lake at Jungfernstieg will convince anyone that there is no nicer large city in Germany. On the continent. In the world. Sorry, I got carried away. But I’m right.

Those swans and large ducks assembled here would agree. They all seem to be registered. At least those seven big ducks which were busy doing nothing on the Ballindamm side of the Binnenalster lake this week had little tags with numbers on their legs. They probably even pay taxes.

And there is the Alstertal, a long park with a small river which runs through the entire city. There is nothing better than feeding registered ducks or renting a canoe on a nice spring day. At Poppenbüttler Schleuse and other beautiful spots, restaurants offer delicious meals.

All that water. Nice. On the other hand it can lead to problems, such as storm surges. Last century, it happened seven times. The new millennium has brought along two serious storm tides so far. Usually the wind presses a lot of water up the Elbe.

In Hamburg, the water can suddenly rise to 6 meters (20 feet) above its usual level. What this means is that there is no pier and that Mr. Manze will have to conduct his Bruckner symphonies wearing rubber boots. It means those who own these elegant villas at Elbchaussee will need rather big hoses to save their wine cellars.

Let’s finally get away from the water. A ten minute walk from Landungsbrücken will take the enthusiastic tourist to Hamburg’s red light district. This is where the main brothels are located. Starting at 8 p.m., prostitutes will be looking for customers in areas designated to them. This was the case before Corona. In Herbertstrasse, a little street open to men only, sex workers used to sit behind windows naked, in pre-pandemic times.

Back in the Good Old Times

What might seem extreme to American tourists or other visitors is perfectly normal to most Hamburgers. The port and the red light district belong together. Prostitutes need to register and pay taxes. Many of them are ‘legal’. And they have been part of the picture for a long time.

Hamburg’s red light district is also a cultural spot. At the former Star Club, which was located right here, four blokes known as The Beatles became famous some five decades ago. Other venues, such as ‘Grosse Freiheit 36‘, the ‘Grünspan‘, or ‘Angie’s’ offed great concerts and atmospheres until the virus hit. A musical theater is there too, right in the middle of what Hamburgers call the ‘Kiez‘. ‘The Tina Turner Musical’ would be on right now if these were normal times.

There used to be great places like the ‘Aftershave’, where people danced many nights away, to Jazz-Funk and Rare Groove tunes, or like ‘Sam Brasil’, where Bossa Nova and Samba acts did their thing. Those were the good times. Oh, yes.

Hamburg is funky, even more than Berlin (please don’t tell anyone), and in several ways. Venues all over town, including the ‘Fabrik‘ in the Altona borough, the ‘Markthalle‘ at Hauptbahnhof, and many others, used to offer culture for people with good taste, including children. Some of them still do.

Parts of Altona and Sternschanze accommodate lots of students and artists, but also the extreme left. Members of groups of this kind would stage violent protests or become squatters, for instance in the ‘Rote Flora‘ theater. But, generally, Hamburg is not extremist at all. Yes, the city has always been more progressive than cities in the more conservative and more religious south of Germany.

Hamburg is also a media city. And it is one of the most international cities in the country, because of the port and its geographic location. Hamburg is Germany’s gateway to Scandinavia. It even feels and looks like Scandinavia, in a way.

Hamburg is Venice. O.k., it isn’t, but it also has many canals. Canoeing, sailing and similar sports are very popular in Germany’s marvel of the north. So is walking along the Elbe and jogging through Hamburg’s numerous parks.

Shopping might not be a sport, but it is even more popular. In the city center, at Jungfernstieg, the Alsterhaus is an excellent department store. Everything they sell is high quality, including the food. Looking for huge truffles from France? Get them here. How about wine and champagne for several hundred bucks or all the designer clothes you want? This is the place.

Looking at City Hall is compulsory. Completed in 1897, this building is truly impressive. It still accommodates the First Mayor of Hamburg and the city state’s ‘Bürgerschaft’, which is its legislative assembly. A few meters away from City Hall, the Alsterarkaden offer both beauty and nice shops.

Just the Way You Are

The Tesla store around the corner has the Model 3 in stock. A bit further away, the Steinway store used to offer concert grands decades ago. Where in the hell is it? Elegant boutiques and excellent restaurants are successfully trying to lure people. Where is that big cinema at Gänsemarkt, where a 12-year-old boy wanted to watch ‘Airport 77’ in 1977, but wasn’t old enough?

There are great seasonal events in Hamburg. In very cold winters, when the Alster freezes, which might happen every 4 millennia these days, they sell Glühwein (yes, hot wine punch) right on the lake. There are great music festivals. And there is the Hafengeburtstag, which is the port’s birthday party. Let’s not even mention the 24 mostly excellent museums.

Hamburg, my beauty of the north, I grew up in your Poppenbüttel district. I will try to be back as often as possible. I love you just the way you are. And I miss you.