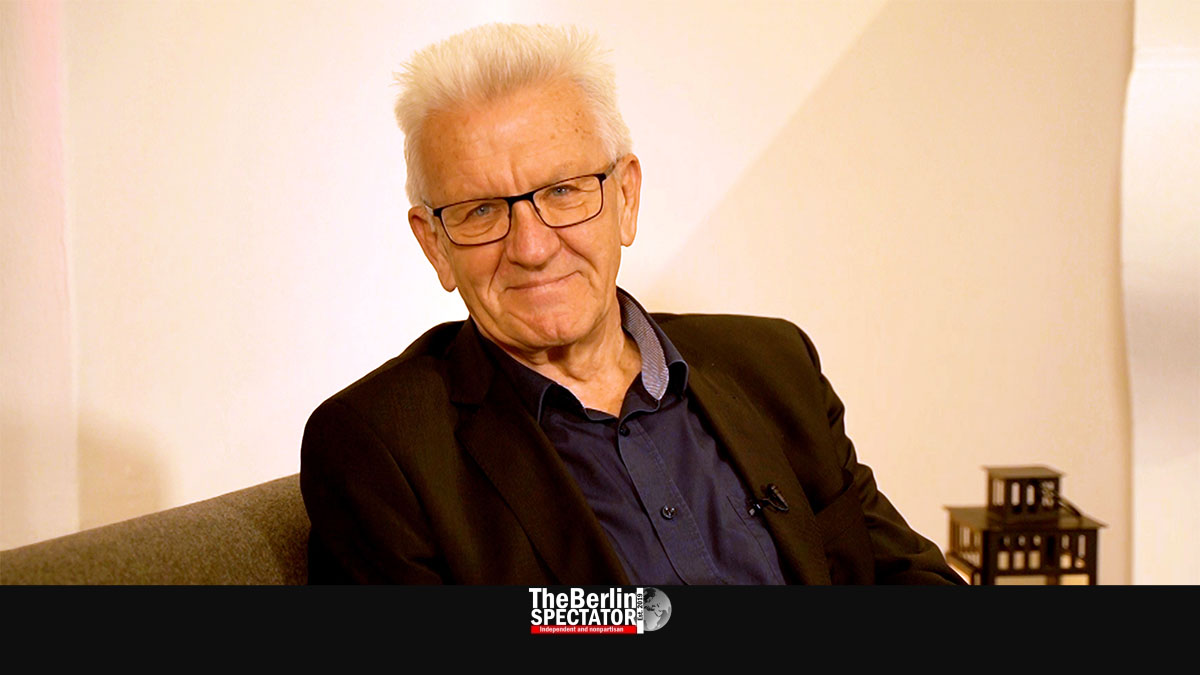 In Germany’s federal state of Baden-Württemberg, the name Winfried Kretschmann is a synonym for winner. In two weeks from now, the Green politician will likely win his third state elections.

Berlin, March 2nd, 2021 (The Berlin Spectator) — Yes, he can. Turning the religious, conservative, wealthy Baden-Württemberg into a Green haven is obviously easy when your name is Winfried Kretschmann. With his down-to-earthness, the jovial 72-year-old has become the appealing figure voters want to keep in office. Green or not, he is the likable character people would even invite into their living rooms.

The phenomenon Winfried Kretschmann metamorphosed into a superstar since he took office in 2011. Even very conservative colleagues of his, including his Bavarian counterpart Markus Söder, keep on stating how they like him. If he was up for adoption, they would probably go for it. People who were staunch supporters of the conservative CDU all their lives want to reelect their First Minister Kretschmann, their friend, the nice guy who is doing a good job.

March 14th is election day. And, yes, there are people who hate the fact that Kretschmann is Superman down there in the southwest, namely the Baden-Württemberg division of the CDU. If the latest polls are accurate, they will become a distant second, yet again. Their 27 percent will not suffice to get Kretschmann off his throne.

Of course they knew in advance. They also knew the candidate for First Minister they sent into the race, Susanne Eisenmann, would not manage to turn things around. Only 22 percent of voters who consider(ed) themselves CDU supporters want their own candidate to win. On the other hand, 65 percent of them want the green Superman. So, is it easy to be green? Down there is Stuttgart, the answer would be yes, if you are Winfried Kretschmann.

There is nothing better than strolling down Königstrasse, Stuttgart’s main pedestrian zone, knowing the state is being governed properly. By now, the Greens are not crunchy granolas anymore, but big players who know how to unite and who have a priority list that makes sense. On those campaign posters with Kretschmann’s photo his people plastered the entire city with it says “You know me”. Absolutely.

Entrepreneurs in Kretschmann’s state say he knew about the economy. Others concede he had managed to make the regional Greens a centrist party. Like vampires, Kretschmann’s party sucked dry the Social Democrats (SPD) during the coalition he ran with them as their junior partner, from 2011 to 2016. Since then, he has done the same to the Christian Democrats (CDU). The Greens now are a big tent party down there.

The CDU had governed Baden-Württemberg, the home of Mercedes, Porsche and many other important companies, for 58 years before Kretschmann thwarted their plans to keep things that way for the next 3,000 years. Sure, nobody is perfect. Winfried Kretschmann’s government has to deal with issues in education and other areas. But that does not seem to hurt him.

His conservative competitor Susanne Eisenmann, on the other hand, has criticized Chancellor Angela Merkel for her Corona policies and called for a reopening of schools in spite of high infection numbers. She might have to pay the price for this approach in March 14th. But her entire party is in trouble. It might even get kicked out of the Stuttgart government coalition. Kretschmann might dump the CDU and go for a three-way coalition with the SPD and the liberal FDP.

It remains to be seen whether the math will support this model. Things are looking really bad for the Social Democrats who might end up with 11 percent of the votes, which would be a catastrophic outcome. That is what recent polls suggest. The FDP might get 9 percent, while the extremist right-wing AfD will probably lose one third of the support it had last time, five years ago.

Voters in Baden-Württemberg are interested in Corona policies, education, the economy and ecology. On Corona, Kretschmann is one of the cautious ones. What the rest is concerned, his policies are sort of conservative. But to answer the question why he is a winner, one single word will suffice: trust.