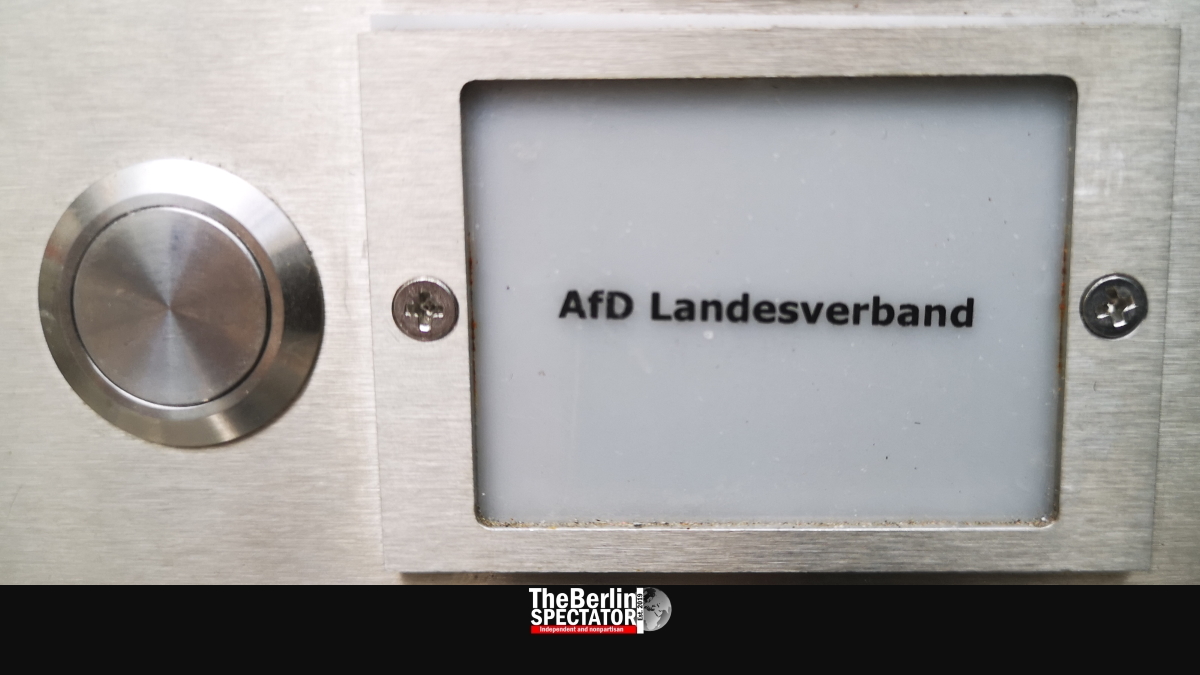 Germany’s intelligence is now investigating the AfD. The decision was taken in February, according to the ‘Tagesspiegel’ daily. It has quite a few implications.

Berlin, March 3rd, 2021 (The Berlin Spectator) — Germany’s Federal Office for the Protection of the Constitution (BfV) suspects that the party ‘Alternative für Deutschland’ (AfD) might not support or work on the basis of Germany’s Liberal Democratic Basic Order, which is part of the constitution. In other words: The suspicion is that the party is not democratic. This is something the ‘AfD’ has been criticized for, for a long time. Of course, the party has always disputed the accusation.

Anti-democratic parties usually do not admit to working against their country’s democracy. At the same time, democratic parties that are being accused of not being democratic will reject any such claims as well. But in the case of the AfD, the BfV will likely find a lot of evidence. If the authority did not have material already, it would not have made the AfD a ‘suspected case’, as it just did, according to the Berlin-based ‘Tagesspiegel’ daily.

According to the report, the BfV’s President Thomas Haldenwang informed the Offices for the Protection of the Constitution in the federal states about the decision on February 25th, 2021. The classification as a ‘suspected case’ gives the BfV the right to use intelligence methods in their investigation against the radical right-wing party. This includes checking its members’ e-mails and using spies to collect evidence.

At first, the AfD had been classified as a ‘review case’. Now, the BfV believes the radicalization within the party is intensifying and that the ‘Alternative’ is indeed an extremist right-wing organization. The influence of extremists within the AfD seems to be growing. Some of those who are being perceived as moderates might really be extremists as well.

For instance, this shows when high-ranking members try to fight the exclusion of individuals who were members of Nazi organizations. This happened last year. Or when those so-called moderates make scandalous statements about the darkest part of Germany’s more recent history.

The ‘Tagesspiegel’ reports, the BfV had forwarded a 1,000-page document with evidence against the AfD to the Ministry of the Interior. In January, it had planned to make the AfD a ‘suspected case’. But it took the lawyers at the Ministry a while to check the document thoroughly. This process has now been completed. The AfD itself has tried to have its classification as a ‘suspected case’ blocked by courts. So far, the party failed. More legal action is a foregone conclusion.

Xenophobia is what the AfD based its success on. The refugee crisis of 2015 served as a stepping stone. By now, the right-wingers have made it into the Berlin Bundestag and all 16 state parliaments. While the AfD has a lot of support in the area of the former GDR, up to 25 percent in some federal states, things look different in the western part of the country.

All in all, the support the party could build on until 2019 was at around 15 percent. During the Corona crisis, they lost about one third of their supporters, according to polls. The BfV’s decision might shrink the AfD further. Its many opponents have reason to hope that both the classification and the party’s internal quarrels between extremists and its so-called moderates will dissolve at least part of it, over time.

From the perspective of the AfD itself, this is a bad moment for an additional issue. There will be two state elections within ten days. General elections for the Bundestag are scheduled to take place in late September.

The BfV’s decision has more implications. Police officers, prosecutors, teachers and people of other relevant professions who are AfD members or supporters might get into trouble with their employers. Especially in these professions, the country has to be able to rely on people who support the Liberal Democratic Basic Order, meaning democracy.

So far, the BfV has not confirmed the decision publicly.