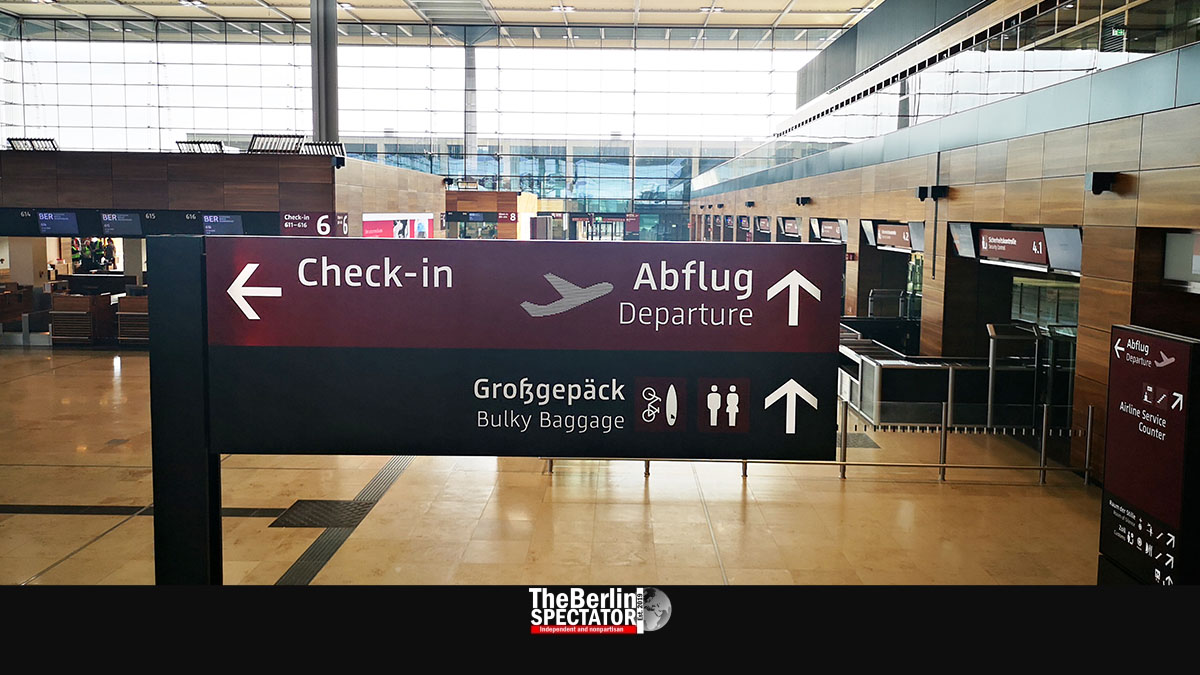 In February, the number of flight passengers at BER, a fancy new airport in Brandenburg province, decreased substantially yet again. Lufthansa’s numbers for 2020, which it will release today, will likely be pretty bad too.

Berlin, March 4th, 2021 (The Berlin Spectator) — Like almost all other business sectors, aviation has been in free fall for a while now. When the Corona pandemic hit early last year, the number of passengers at Berlin Brandenburg Airport temporarily decreased by 98 percent. In spring and summer of 2020, there were more flights because Germans had the opportunity to spend their vacations in Spain. With the second, hardly any passengers were left in fall. The same applies today.

BER Airport’s Terminal 1 was built for 28 million passengers per year, or far more than two million per month. But in February of this year, only 146,945 travelers were counted. In January, BER’s numbers were extremely low already, but still higher than last month,, by about 60,000, according to FBB, the state-owned company that runs the airport.

In February of 2021, the number of passengers at BER Airport was about 7 percent of what it had been in February of 2020, just before the first lockdown turned the aviation world upside down. The reasons are obvious. People are confined to their homes, cities or countries because of the pandemic. The airline industry is hoping for a trend reversal once many people have been vaccinated, but it is not expecting things to return to what was considered normal until 2024 or even later.

Some 3,000 aircraft took off or landed at BER Airport in February. This is close to nothing. A year earlier, in February of last year, 20,000 planes were counted at the former airports Schönefeld and Tegel. This is a serious decrease. The freight business last month dropped by 43 percent to 1,530 tons, again compared to the same month in 2020.

FBB’s CEO Engelbert Lütke Daldrup is not happy. He said the decrease had reached a low point at all major airports in Germany. Flight operations had almost come to a standstill. He stated people wanted to fly to holiday destinations. Lütke Daldrup demanded “an effective vaccination and testing strategy”, even though airport bosses are not really responsible for medical questions or Corona policies.

Lufthansa is not much better. In 2020, the Federal Republic of Germany piled up a lot of cash to save the airline. Those 9 billion Euro (10.9 billion U.S. Dollars or 7.8 billion Pounds Sterling) might be used up soon. Lufthansa Group made 1.15 billion Euro (1.4 billion Dollars or 1 billion Pounds) in the third quarter of 2019, but lost almost twice that in the third quarter of 2020.

Today, Lufthansa’s Carsten Spohr will publish his company’s business figures for the entire year of 2020. One thing is certain: The losses will be about as high as Airbus A350s should be flying. Instead, most of the hundreds of aircraft Lufthansa Group owns are neatly parked, at airports around Europe.