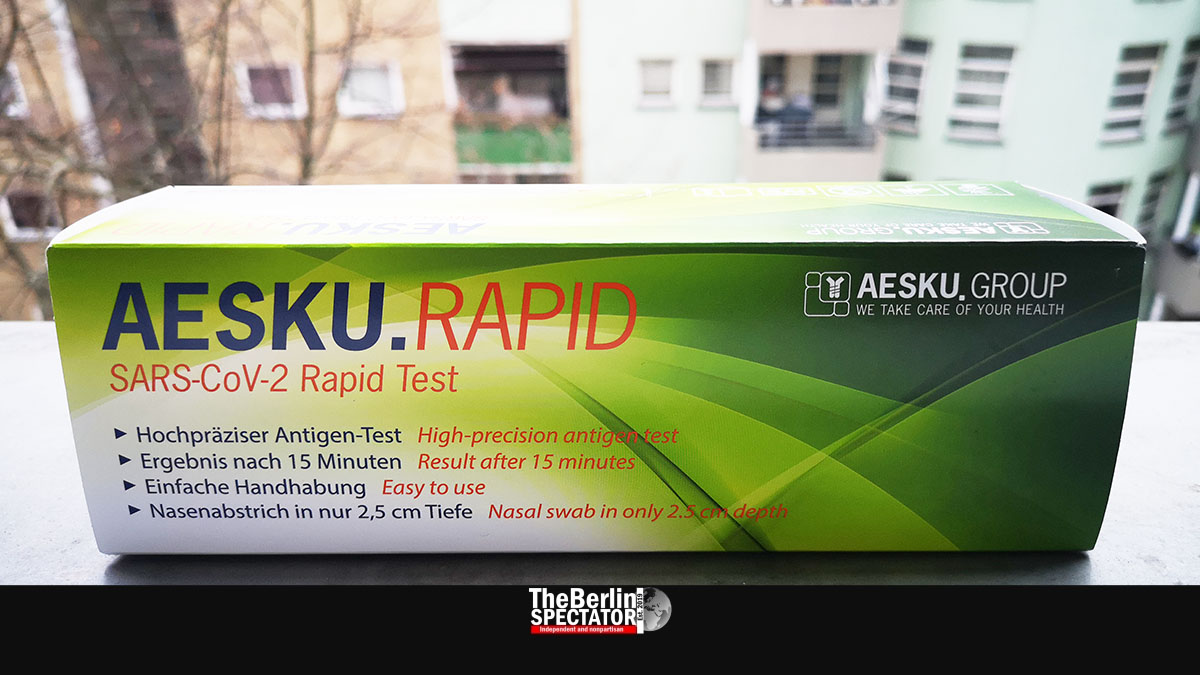 In Germany, the number of new Corona infections is increasing slowly. People who wanted to purchase rapid Corona tests at supermarkets were disappointed since they were sold out within seconds.

Berlin, March 7th, 2021 (The Berlin Spectator) — The sale of rapid Corona tests the entire Federal Republic of Germany is talking about got off to a bumpy start. Big supermarket chains such as Aldi proudly announced their beginning earlier this week, for 24,99 Euro (29.78 U.S. Dollars or 21.52 Pounds Sterling) per test. But hardly any items were available in many of their stores.

At the Aldi supermarket at Hasenheide in Berlin, exactly six rapid Corona tests were available. It took only seconds, literally, until they were sold out. It is unclear why a chain like Aldi would deliver only six tests to one of their shops, or where the remaining tests ended up, if there were any. At other branches, it was the same picture. There were long waiting lines in front of supermarkets on Friday, while the tests people wanted were gone already.

In the meantime, eased Corona rules are now in place in Berlin. For instance, the contact restrictions were changed. Up to five people from up to two households may now gather. Kids up to 14 years of age do not count. Up to now, persons from one household had had the right to meet with up to one individual from a different household. In the rest of Germany, the changes kick in on Monday.

The city state of Berlin is the only federal state in Germany that made International Women’s Day an official holiday. It is being observed on Monday, March 8th. In Germany, shops, including supermarkets, close on Sundays and official holidays. For that reason, the reopening of non-essential retail businesses in the German capital will take place on Tuesday. In the rest of the country, it is Monday.

For now, as long as the Seven Day Incident Numbers are above 50, shops of all kinds may open under these conditions: Customers need an appointment, and they are supposed to stick to time windows. The number of customers who are present in a shop at the same time is limited and depends on the size of the facility.

While the easing of the Corona restrictions is being implemented, the Coronavirus infection numbers are on the rise. They have been increasing again for a while now. According to the Robert Koch Institute, there were 8,103 new infections within 24 hours, which is a little more than a week ago. The total number of cases in Germany, since the crisis commenced 404 days ago, just exceeded 2.5 million. Since yesterday, the Incidence Number for Germany rose from 65.6 to 66.1.

In Thuringia, Germany’s Corona hotspot, the Incidence stands at 131.9. Two out of sixteen federal states, Rhineland-Palatinate and Schleswig-Holstein, are below 50. During the peak of the second Corona wave, Germany’s Incidence had been above 160. Whether the country is in a third wave right now is a matter of discussion among experts.