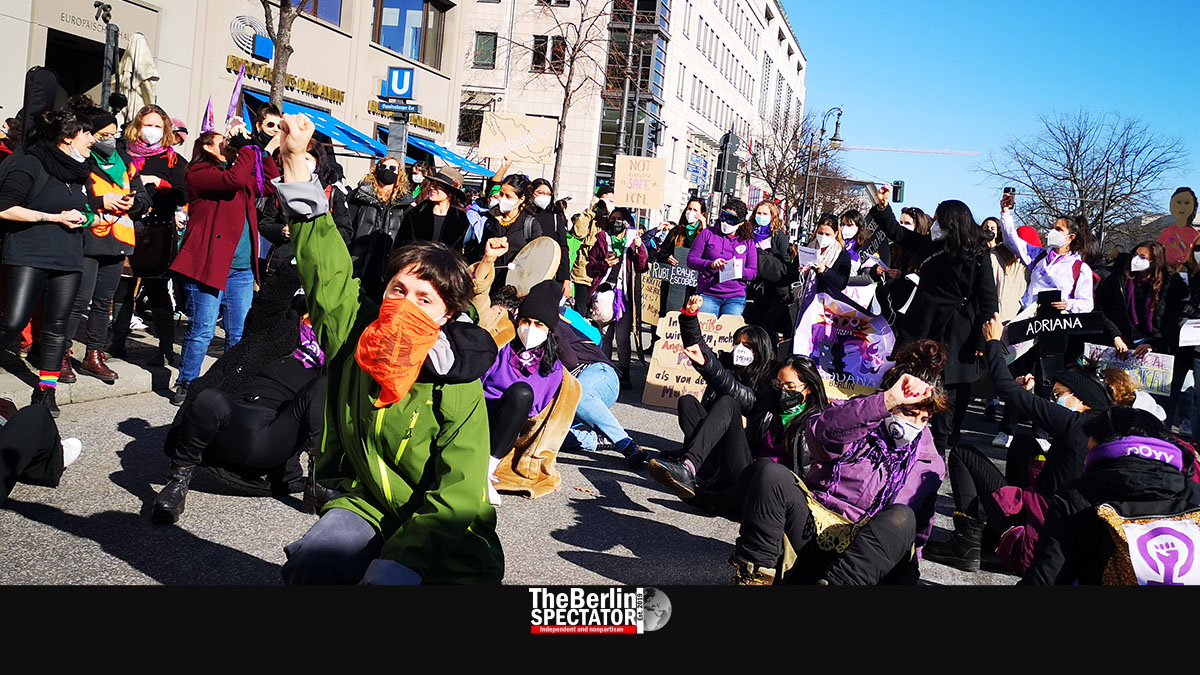 In Berlin, several rallies for women’s rights took place today. Because of Corona, the participants were separated in groups. Women from all over the world were part of the events.

Berlin, March 8th, 2021. Update: 9:19 p.m. (The Berlin Spectator) — At Brandenburg Gate in Berlin, some 400 protesters, most of them were women, rallied for more equality between the genders on Monday. Later, their number increased substantially, to up to 10,000, according to the police. Berlin is the only federal state in Germany that made International Women’s Day a holiday.

The protesters who had gathered at first, all of whom wore masks, were a very international crowd. In front of the Representation of the European Commission, a few steps away from the Gate, a large group of Latinas held up signs to raise awareness about the situation in their home countries.

“In Mexico, we are more afraid of the police than of mutations”, one of those signs read. Another one said “Somos la voz de las que ya no están” (“We are the voice of women who are not with us anymore”). Along with the names of crime victims in Mexico, on banners held up by some participants, this was a protest against the alarming violence against women and police brutality in that country.

One Mexican lady told The Berlin Spectator, women generally did not have the same rights as men. But, the rally was also about the situation in its participants’ home countries. There was a lot to fight for. It was important to take to the streets to demand more equality.

Another group of women at the protest played partially aggressive music through giant loudspeakers mounted on a truck with a big sign that read “It is not a party. It is a fight.” A woman who was part of a group of ladies who wore orange vests saying ‘Alliance of International Feminists’ was unfriendly and refused to say anything.

A few steps closer to Brandenburg Gate, Annemarie Schoss (German spelling: Schoß) of the organization Terre des Femmes told our reporter, she and her colleagues were confronted with many cases of violence against women, including genital mutilation. Other women were wooed into prostitution. She said Terre des Femmes was concentrating on the subject of prostitution right now, and on support for women who wanted to get out of that business.

Police at Brandenburg Gate were busy making sure each group of protesters was separated from the others, because of the Corona pandemic. While most participants tried to adhere to the Corona rules, some did not keep enough distance. This was difficult in some of the larger groups that were present.

Ahead of International Women’s Day, Germany’s Chancellor Angela Merkel had stated the country should not fall back into old role models in the Corona crisis. Mainly women were the ones who were dealing with home schooling, caring for children and work, all at the same time. She also said women needed to earn as much as men. Parity in all areas of society was necessary.

She criticized decision takers in both politics and the economy. Looking at the share women had in leadership positions led to the conclusion that the goal of equality had not been reached, Angela Merkel stated. Women needed to be involved in important decisions in politics, the economy and society. Mrs. Merkel said International Women’s Day was a good opportunity to establish what aspects were missing on the way towards equality of the genders.

In Germany’s DAX companies, only some 12 percent of all management board members are women. In Angela Merkel’s own government, only six out of fifteen federal ministers are female. Soon, the Chancellor will likely be a man as well. In September, Merkel intends to leave politics. The candidates with the best chances of winning the general elections in September are men.

Germany’s Commissioner for Human Rights, Bärbel Kofler, stated women’s rights were trampled on in many parts of the world. Women were being put in jail just because they fought for their rights. According to Mrs. Kofler, women’s reproductive rights are being restricted. Corona had had “the effect of a burning lens”, in this regard.

The pandemic had worsened the situation many women were in, Bärbel Kofler explained. One example was the “shocking increase of domestic violence” last year. At the same time, there was reason for hope, because women in several parts of the world were standing up for their rights. They had become leaders of pro-democracy movements, and they fought for the rights of female employees.