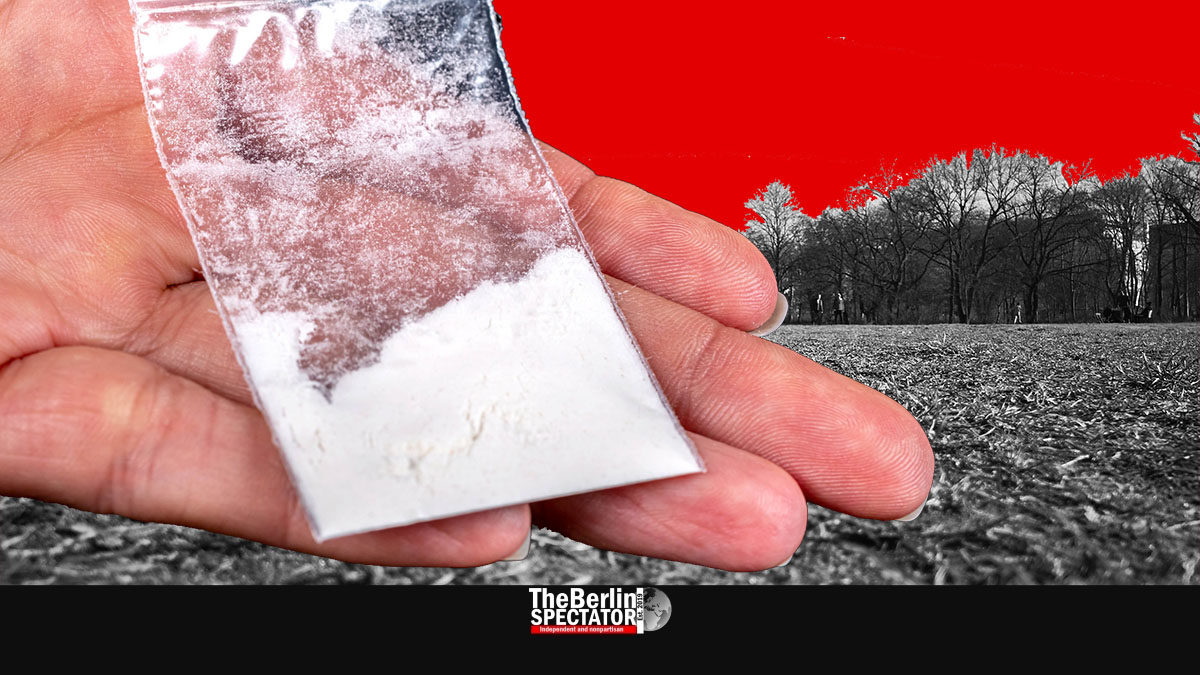 Berlin’s fight against drug dealers is going into the next round. The city state’s prosecution and the Berlin Police Department decided to take a new approach to put delinquents under pressure. It includes a strategy called “delinquent frustration”.

Berlin, March 11th, 2021 (The Berlin Spectator) — Today, Berlin’s prosecution announced a new strategy in its fight against drug dealers at the city’s Görlitzer Park and comparable places. The methods used are supposed to become more effective and scare dealers away. “Delinquent frustration”, a new term, was used several times today, when the prosecution explained its new approach to the press. Drug dealers are supposed to be deterred from continuing their business, for instance at Görlitzer Park, Hasenheide, which is another big park full of drug dealers, Kottbusser Tor, a chaotic square in Berlin’s Kreuzberg borough, and other infamous spots.

As Berlin’s Attorney General Margarete Koppers explained, the prosecution and the police have different tasks, but there is a “trustful cooperation”. She and her colleagues had asked themselves the question whether the situation had changed and if the prosecution needed to react accordingly, with the purpose of improving the cooperation in the fight against drug dealers.

Chief Prosecutor Jörg Raupach stated, collateral crime, such as theft and violence between rivaling gangs, was being fought too. This was part of the new concept. Talks between the Police Department and the prosecution on the subject had recently taken place. According to him, the new approach includes the identification of structures within the networks of drug dealers who are active in Berlin. The other part is identifying multiple offenders in order to be able to have an overall picture of the situation.

Reiner Pützhoven, who is part of the division responsible for the fight illegal drugs at the prosecution, said the aggressive behavior of some drug dealers made residents feel less secure. Therefore the goal was to remove them from the sites they are active at. Pützhoven explained, concentrating on some individual dealers could be successful. This approach would frustrate others as well, and show them that it was better to pull back.

Another part of the new strategy is what Pützhoven called “one-hand processing”. Offenses one drug dealer is responsible for is always supposed to end up in the same hands at the prosecution’s drugs division. That way, the authority’s overview is supposed to be improved. But prosecutor Pützhoven conceded there is a problem: Investigating those drug gangs at Görlitzer Park and other places is complicated. Undercover investigations were almost impossible, he said, also because the dealers came from one and the same region in the world. Getting undercover agents into that gang will likely not even be attempted.

Last week, Berlin’s Interior Senator Andreas Geisel was at Görlitzer Park, in order to get a first-hand look at the situation. He said he wished there was a division at the prosecution that dealt with drug dealers. Attorney General Margarete Koppers reacted today, by saying she and her colleagues had been confused about this suggestion, also because it was not new. Besides, the Berlin prosecution has a division of the kind Geisel said he wanted.

The prosecutors involved are expecting a displacement effect to kick in once some drug dealers do not work at their usual spots anymore. Some of them will likely end up in other parts of Berlin. Reiner Pützhoven also made it clear it was an illusion to think Görlitzer Park or other parks would be dealer-free at some point, meaning the drug business at the parks will definitely continue.

All in all, the Berlin authorities in charge of fighting the problem intend to jump-start yet another attempt to improve the fight against drug dealers, by making it more effective. Putting dealers under pressure is one of the steps they will take. Starting immediately, one prosecutor will deal with all crimes one and the same dealer is responsible for. The prosecution calls the approach a “delinquent-oriented strategy”. Both the prosecution and the Police Department now have contact persons for the coordination of the mutual fight against drug dealers.