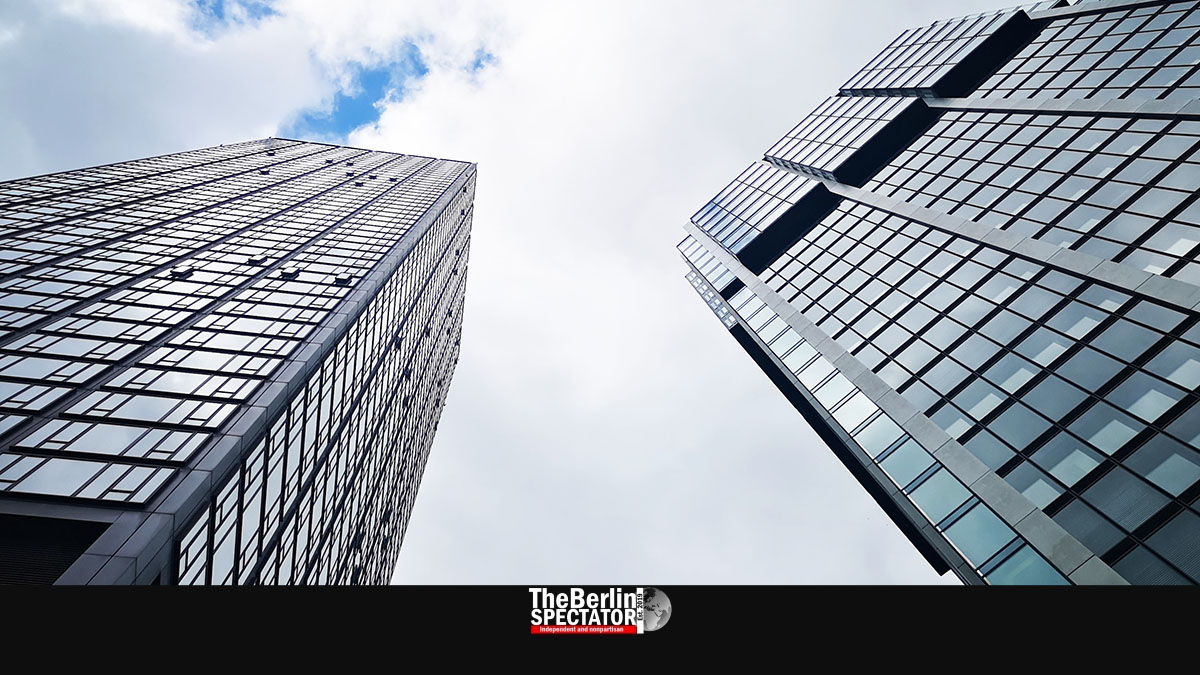 Frankfurt am Main is a small global city. In spite of having only 750,000 inhabitants, it accommodates the most important stock exchange in mainland Europe, one of the largest airports on the continent and the biggest trade fairground in the country. Besides, Frankfurt is beautiful.

Berlin, September 14th, 2019. Update: March 11th, 2021 (The Berlin Spectator) — Who says tourists enjoy what they do? O.k., most of the time they are happy, unless they feel the inner urge to climb to the top of Frankfurt Cathedral’s tower. Two Spanish tourists who were on their way up on Friday were out of breath after hundreds of steps. They said those winding stairs would probably never end. And they were right.

A guy who started climbing up those stairs in November of 1972 just arrived at the top last Monday. An American lady on her way down told people who were part of the contraflow how much more they would need to cover. They were not happy, but sweating like pigs, including the author of these lines.

Once and if they do arrive up there, tourists need mouth-to-mouth insufflation or an oxygen tent, especially when they carry countless cameras and weigh 105 kilos, thanks to all those pizzas and loads of apple juice. It is not quite as bad as climbing Cologne Cathedral though. Anyway: Everyone will be awarded up there. The view is worth a hundred times the 3 Euro for the ticket. It will lead to one conclusion: Frankfurt is beautiful.

From here, the Main river, the old town with its many medieval houses, including the ‘Römer’, look like a miniature Lego city. Thousands of photos are being shot up there every day, and rightly so. You want a selfie with an appropriate background? Climb those stairs. Don’t think about it. Just do it. Yes, we can.

Before Frankfurt Cathedral was built in the year 1550, there were at least four other temples at the very same spot. Those included a Merovingian church, a Carolingian one, a Roman and an early Gothic temple.

Apart from climbing never-ending staircases, people love to eat when they get to Frankfurt. Those who intend to try a local specialty might want to go for Frankfurt Green Sauce. This local dish is based on several kinds of herbs. It is being consumed in a cold state, with boiled potatoes and eggs. How it tastes? No clue. But it looks sublime.

Whatever they eat, many Frankfurters and tourists, at least those with deep pockets, do so at a street which exists for that very purpose, right in the pedestrian zone. ‘Fressgass’ (or ‘Freßgass’ with that weird German letter ‘ß’), could be translated as ‘Munching Alley’. This name for a stretch of streets with many restaurants, located between the ‘Alte Oper’ and Frankfurt Stock Exchange, came up 120 years ago.

At around 1 p.m., stock brokers in expensive suits flock into the pedestrian zone. Some just choke down a dry pretzel from the market around the corner because, in their profession, time is money. Others will eat at high-scale restaurants in ‘Fressgass’ before hurrying back inside the Stock Exchange. Money does not take breaks, right?

Frankfurt can be pretty crowded and loud, including at its central station. It is an important train hub in Germany which connects the south-west to the north-west of the country. Tens of thousands of travelers change trains at its large terminus, or they arrive for visits in Frankfurt. Of course, this mainly applies in normal times.

In addition, just as many commuters travel in and out every day. Many live in the Taunus region, in Bad Homburg, Wehrheim, other small towns or villages where living is more affordable and definitely more quiet. They drive to a regional train or ‘S-Bahn’ train station in order to get to Frankfurt. Those commuters include bankers, lawyers, IT people, flight attendants, pilots and countless members of a very international community of people with lots of professions.

No Vacancies in Frankfurt Hotels

Right in front of central station, one of Frankfurt’s problem spots, the area around ‘Moselstrasse’, attracts alcoholics, drug addicts, pimps, prostitutes and their customers. The ‘Sex Inn’ is a brothel in which men pick prostitutes who offer their services in private rooms located on four floors. It is like a supermarket for paid sex.

Next to the building, young men with beer bottles in their hands sit right on the dirty street. Around the corner, a homeless lady who looks like she is stoned lies on the ground, next to three plastic bags which seem to contain everything she owns. This is not limited to Frankfurt. All larger German cities have this kind of quarter. But the situation here seems to be worse.

During trade fairs at Frankfurt’s oversized fairground, visitors fill virtually all hotel rooms available in the city, in spite of the scandalous prices. In normal times, without dangerous viruses, the Chinese, the Japanese, the Indians. the Americans and Europeans are here. Everyone is, in order to experience the “new mobility” the IAA was selling until Frankfurt lost this most important car trade fair of them all. The Frankfurt Book Fair is important too. And it stays.

From Gate to Gate

Many factors make Frankfurt a truly global city: The Stock Exchange, Germany’s small equivalent of Wall Street and the fact that virtually all German banks have their HQs in Frankfurt. Also the city runs the fourth-biggest airport in Europe.

Frankfurt Airport is quite something. Passengers who change flights or just arrived, and those who are leaving from here, need to walk huge distances in many cases, from terminal to terminal, from gate to gate. It’s a pain in the neck. This airport will not shrink anytime soon. The opposite is the case. Terminal 3 is being constructed as we speak.

As many as 69.5 million passengers were counted at Frankfurt Airport in 2018. On this continent, only London Heathrow, Paris Charles de Gaulle and and Shiphol in Amsterdam are bigger. More than 2 million tons of freight were brought in and taken out into the skies from Frankfurt Airport every year, before Corona hit.

A Son of the City

Trains, planes, trade fairs, banks and countless construction sites, including a big one in the financial district: All of this is part of Frankfurt. Too much? Yes, indeed. But there is quietude and deceleration too. Those who are looking for it will find it quickly.

Right around the corner from the ‘Alte Oper’, the ‘Bockenheimer Anlage’ park is green, quiet and cute. It features paths, grass, trees and other plants, good air, even a little gallery and a lake. The latter was named after a lost hero, namely the late Albert Mangelsdorff, a genius trombonist who was born in Frankfurt and died here. A son of the city.

For anybody who might be thinking about visiting Frankfurt, the answer should be yes. A day or two for city tourism and a cultural night or two are always a good idea, unless everything is closed and restricted. Besides, the region around the city offers a mostly beautiful countryside, castles and towns like Hanau which are worth a visit too.

Another son of Frankfurt, Johann Wolfgang von Goethe, said the following about his birth city: “In a city like Frankfurt, one finds oneself in a strange situation. Strangers who come here point to all parts of the world and awaken the desire to travel.” The guy is right, even though the over-sized airport did not even exist, nor did aviation, when his travel lust developed.