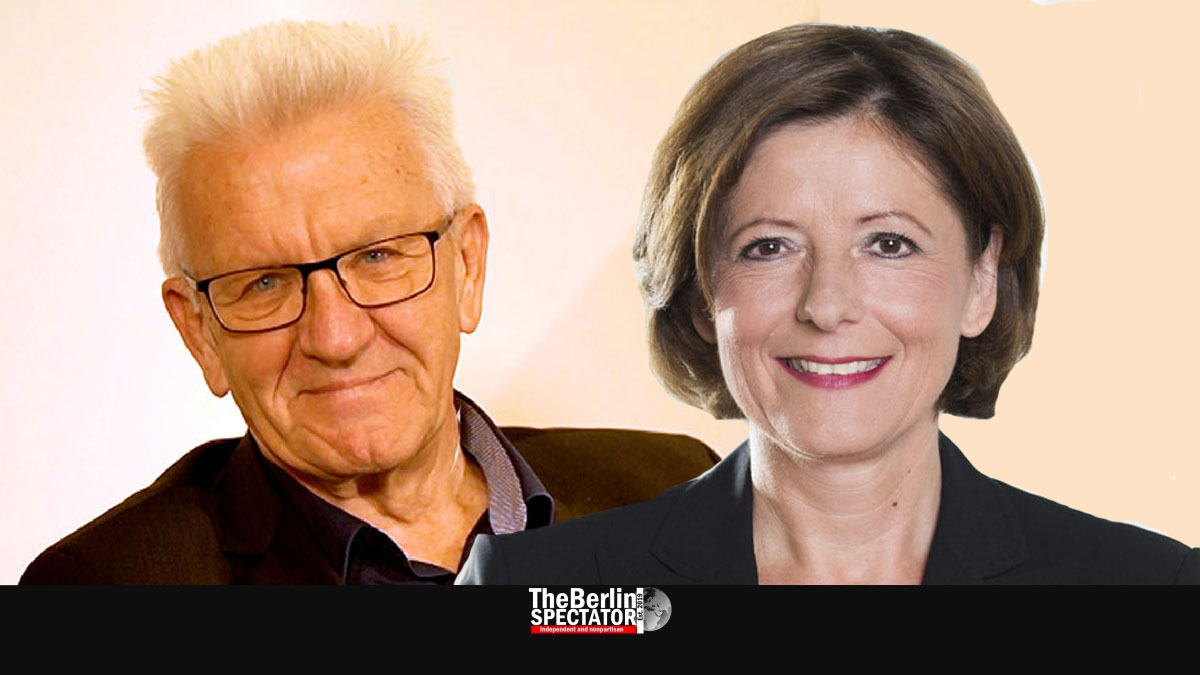 Berlin, March 15th, 2021 (The Berlin Spectator) — In Baden-Württemberg and Rhineland-Palatinate, First Ministers Winfried Kretschmann, a Green politician, and Malu Dreyer of the Social-Democrats (SPD) had reason to be optimistic about the elections today. In the case of Baden-Württemberg, Germany’s strongest party, the Christian-Democratic Union (CDU), did not stand a chance against Kretschmann, even though this state used to be their stronghold, for decades. In the end, the conservatives lost badly in both states.

These are the results for Baden-Württemberg:

And these are the latest results for Rhineland-Palatinate:

In both states, the coalition question is important. Winfried Kretschmann might switch from the CDU as his junior partner to the SPD and FDP. In Rhineland-Palatinate, Malu Dreyer is running a so-called traffic light coalition with the Greens and the FDP, since 2016, which she wants to continue.

Both Dreyer and Kretschmann are very popular in their states. These two candidates relied on their names more than on their parties, especially Mrs. Dreyer. Her party, the SPD, has lost a lot of support since its Chancellor Gerhard Schröder lost the Bundestag elections to Angela Merkel in 2005. According to polls, the SPD’s numbers are catastrophic in most federal states and on the federal level. Rhineland-Palatinate, Hamburg and Bremen are the last SPD strongholds.

Many big questions are connected to the outcome of today’s elections. For instance, the CDU was eager to see how well its new chairman Armin Laschet can pull votes outside of his own state. He is the First Minister of North Rhine-Westphalia. The outcome of today’s elections might even influence the answer to the question who will be the CDU’s candidate for Chancellor. Will it be Laschet? Or could his Bavarian colleague of the CDU’s sister party CSU, Markus Söder, be the man for the job? Since the result is rather disappointing for the conservatives, the relevance of those big questions just grew.

Another question is whether the latest corruption scandal at the Bundestag, which involved two of the CDU’s MPs, cost the CDU votes or not. Judging from the first projections, this might be the case.

In Rhineland-Palatinate, the SPD has governed for 30 years. All tries by the CDU to beat the Social Democrats have failed, no matter which candidate they sent. This is exactly what happened today, yet again.

Berlin politicians started commenting the results just minutes after the polling stations closed. For the SPD, their secretary general Lars Klingbeil stated he was happy Malu Dreyer won by a big margin. Both election results showed that “majorities without the conservatives” could be reached. Klingbeil’s CDU colleague Paul Ziemiak said in Berlin, the results were disappointing.

The SPD’s candidate for Chancellor Olaf Scholz, who is also Finance Minister and Vice Chancellor, said the result in Rhineland-Palatinate showed that SPD candidates could indeed be voted into a position in which they had the opportunity to form governments.

Malu Dreyer, the election winner in Rhineland-Palatinate, said the outcome of the elections was a confirmation for her government’s work and policies. It was nice to be at the very top in regard to the results. Her opponent Christian Baldauf said this was a difficult evening. He thanked his party, the CDU and said the campaign had been difficult under Corona conditions.

Election winner Kretschmann said in an interview with the ZDF, he was glad the voters had confirmed his work in the government. He announced talks with “all democratic parties”. He meant he would not talk to the extremist right-wing AfD. In Stuttgart, the CDU’s chairman Thomas Strobl said the results were very disappointing for his party in Baden-Württemberg. The voters had not wanted change. The CDU’s expectations had been different. Strobl told ZDF television, he would not blame anyone in Berlin. State elections were not automatically connected to events in the capital.