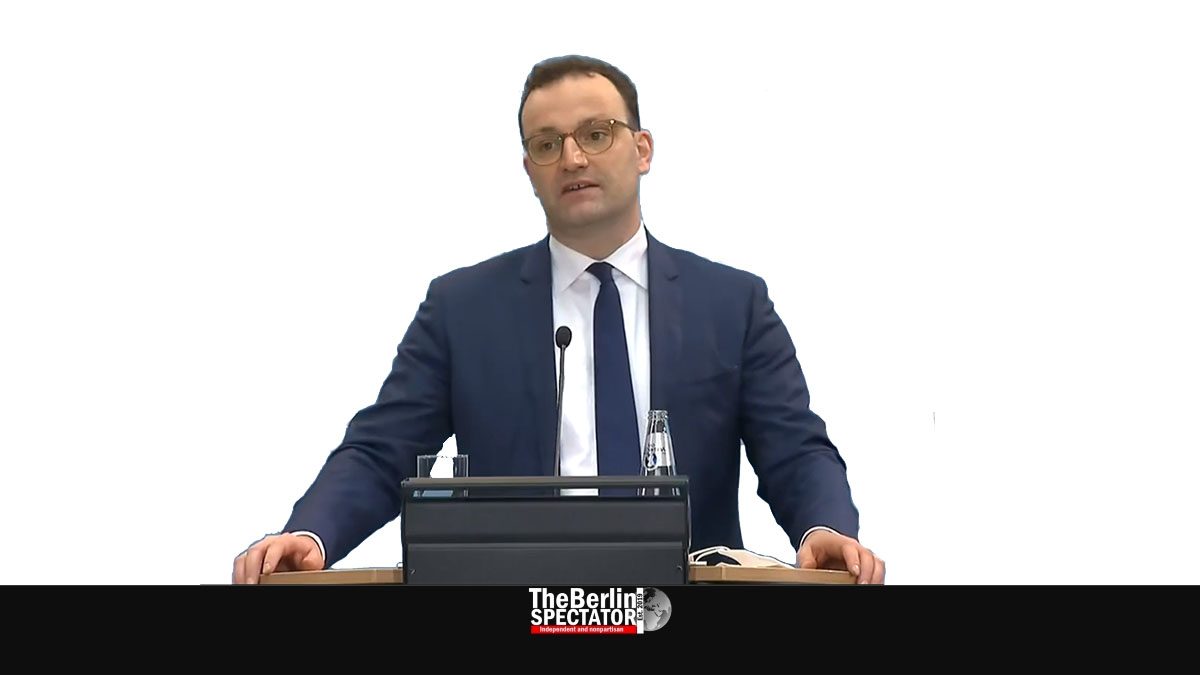 In Berlin, Health Minister Jens Span said, Germany was suspending all vaccinations with the AstraZeneca product. A recommendation by the Paul Ehrlich Institute had led to the decision.

Berlin, March 15th, 2021 (The Berlin Spectator) — Health Minister Jens Spahn delivered the latest breaking news on Corona vaccinations in Germany. For now, the use of the vaccine manufactured by the Swedish-British company AstraZeneca will be suspended, effective immediately, because of reports of some cases of cerebral vein thrombosis which may have been caused by the product. The Paul Ehrlich Institute believes, more studies are necessary because of the reports. Now it was up to the European Medicine Agency to check whether the new information about possible side effects of the AstraZeneca vaccine might have an impact of the approval it got, Spahn stated.

Germany is not the first country to suspend the use of the AstraZeneca vaccine. Nor is this the first time the product hits the news headlines. First, the German authority responsible for approvals for medication had said the AstraZeneca vaccine should not be used on people above 65 years of age, because there had not been sufficient tests and data. A few weeks later, the vaccine was approved for elderly people after all. Denmark, Norway, Iceland, Ireland, the Netherlands, Austria, Bulgaria, Estonia, Lithuania, Latvia and Luxemburg suspended the use of AstraZeneca last week.

So far, 1.6 million doses of the product in question have been used in Germany. Last week, on Friday, Spahn had stated he did not see any connection between patients with blood clots and the AstraZeneca vaccine. Now, he changed his position on the matter because of the latest recommendation by the Paul Ehrlich Institute. At the same time, the EMA released a statement according to which the number of thrombosis cases among individuals who had been vaccinated with the AstraZeneca vaccine was not higher than the average among persons who had not. The manufacturer said, 17 million people in the European Union had been vaccinated with AstraZeneca so far. There was no elevated risk for cerebral vein thrombosis.

Jens Spahn said during a hastily arranged press conference at his Ministry in Berlin, the decision to suspend AstraZeneca vaccinations applied to both the first and second shots, meaning people who got the first dose will not receive the second one, as long as the suspension is in place. The Minister also stressed today’s decision was a “pure precaution”. AstraZeneca was still being used in many countries in the world.

“We are all aware of the consequences of this decision”, Spahn said. The government had not taken it lightly. To him, it had always been clear that this was “a functional decision, and not a political one.” In order to preserve the confidence in the vaccine, the experts needed to be given time now, to do thorough research. The vaccination centers all over Germany had been informed about the step, the Minister stated.

For months, the German government had been criticized for its vaccination strategy. At first, when the amount of vaccine that was delivered to Germany had been low, just like in the other European Union member states, the ‘Bild’ tabloid started a campaign in which it accused the Berlin government of having caused a “vaccination disaster”. Then, the European Commission, which was actually responsible for purchasing vaccine, was criticized. Since, complaints about all aspects involved have continued to come in. The suspension of the AstraZeneca vaccine will likely not calm down the critics.