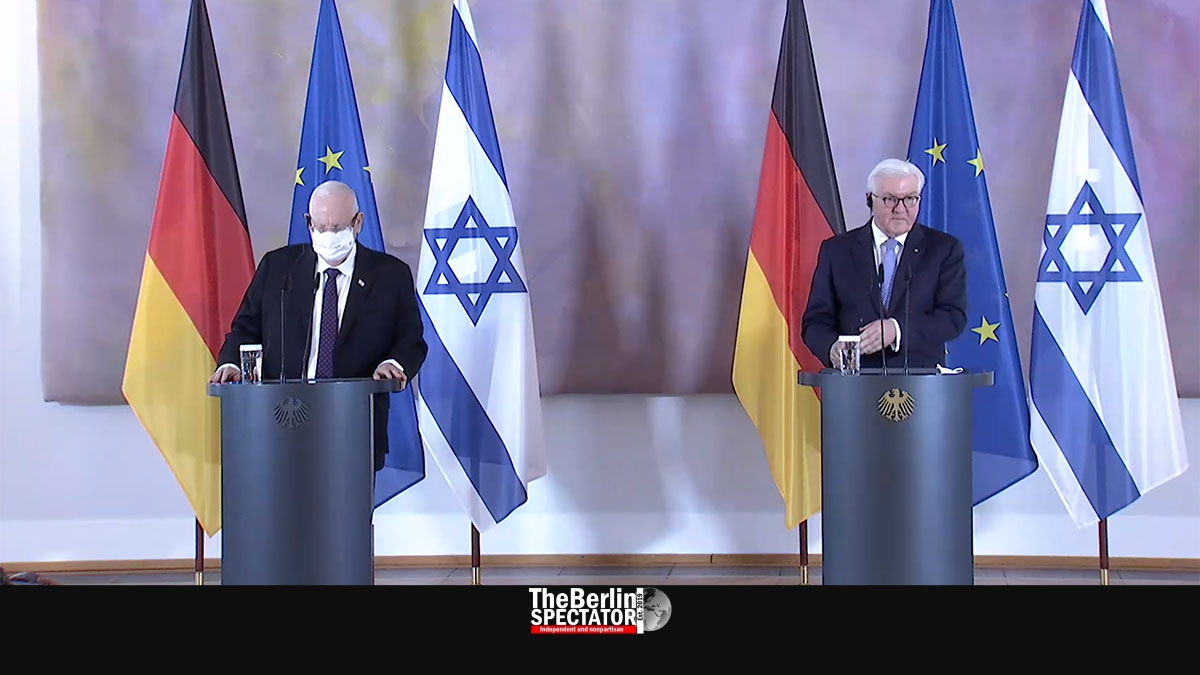 In Berlin, the first state guest in many months arrived today. Israel’s President Reuven Rivlin visited his German colleague Frank-Walter Steinmeier. There was a lot to talk about.

Berlin, March 16th, 2021 (The Berlin Spectator) — In Berlin, the Presidents of Israel and Germany, Reuven Rivlin and Frank-Walter Steinmeier, discussed several important subjects today, including the Corona situation in the world. At a short press conference after their meeting, host Steinmeier stated he had congratulated Rivlin for the pragmatic way Israel had chosen for its vaccination campaign, in which it had made a lot of headway.

In Germany, Israels approach in regard to Corona vaccinations had gotten a lot of attention and respect. Other states could learn from Israel, Steinmeier said. At the same time, his Israeli guest Rivlin and he believed that people could only be protected once and if there was a fair distribution of vaccine in the world, to poorer states as well, for instance through the World Health Organization’s COVAX program.

Steinmeier also praised the normalization agreements between Israel and some Arab nations. The German President called them historic. He also noted the efforts to reach peace in the Middle East were being newly adjusted right now, after the recent change of administrations in Washington D.C.. Steinmeier stated Germany shared Israel’s worries about the danger posed by Iran and Hezbollah. While the old U.S. administration had not reached any successes in the region, the new one hopefully would, Steinmeier said in Berlin.

At all opportunities they have, German government politicians and President Steinmeier, who is a former Foreign Minister, keep on reminding Israel of the Two State Solution. Today, the German President said it was “imperative”. For decades, Israel tried to reach a Two State Solution, while the Arabs rejected it, along with all other peace proposals that have been on the table since 1948.

Reuven Rivlin said he was moved about being in Berlin today. He talked about his time as a student during which he had taken part in demonstrations when the first German Ambassador to Israel had arrived. Since those times, he had held a speech at the Bundestag and met a “courageous German leadership” that was part of the fight against antisemitism. It also made sure the Holocaust was remembered. Germany was committed to Israel’s security, the guest from Jerusalem stated. “We rely on our friends in Europe, also regarding the fight at the International Court of Justice”, Rivlin said. The court had recently said it was going to investigate alleged war crimes. Several states believe the court has no jurisdiction here. Besides, Israel has been pulled into wars it never wanted all along, and it tries to avoid harming civilians whenever it happens.

The Abraham Accords that had been signed with Arab states where a glimmer of hope, President Rivlin stated. But, at this moment, “extremist forces” were attempting to throw the situation out of balance. Rivlin thanked Germany for its attempts to save Israeli prisoners and hostages held by Hamas and said he hoped for a continuation of talks with the Palestinians.

Steinmeier had visited Israel in January of 2020. For the ceremonies on the 75th anniversary of the liberation of Auschwitz, he held speeches at the former death camp itself, as well as at the World Holocaust Forum in Yad Vashem. Shortly after, on January 30th, 2020, both President Reuven Rivlin and President Frank-Walter Steinmeier had held speeches at the Berlin Bundestag, where another ceremony took place. In his Bundestag speech back then, Rivlin demanded a ban of Hezbollah in Germany. Exactly three months later, to the day, on April 30th, 2020, Germany took that step. Before, Berlin had made a difference between the terror organization’s “political and military arms”. From the perspective of Israel, there never was any difference.