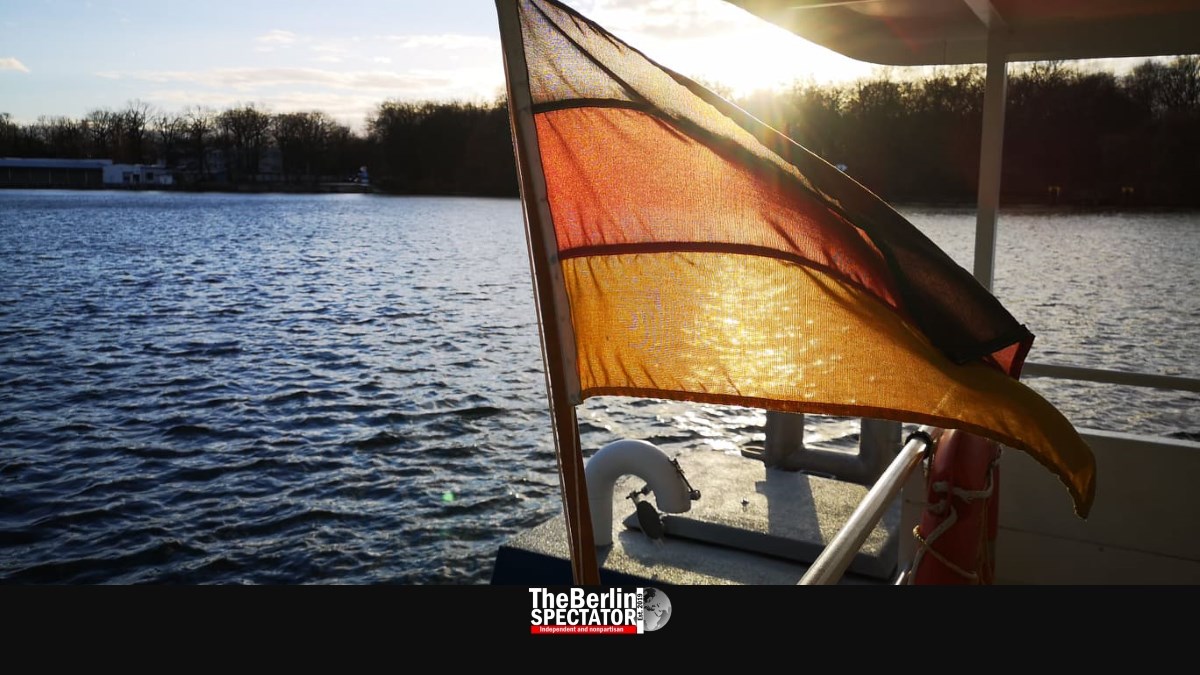 In Berlin, getting away from the office, the noise and all the Corona troubles once in a while is a good idea. One excellent option is to hop on the Wannsee ferry.

Berlin, March 12th, 2019. Update: March 18th, 2021 (The Berlin Spectator) — Berlin’s two city train systems, its trams and buses move a lot of people around. The mostly yellow vehicles operated by the state-owned public transport company BVG are omnipresent in the city. Relatively cheap tickets are required to use them. The same BVG tickets are valid for the ferries they run as well. To Berliners who live in certain areas along the Spree or Dahme riverbanks, mostly in the outskirts, ferries are a regular means of transport. To tourists and Berliners who live elsewhere, they are more than that. Recreation is the word.

There are three all-season ferries which can be used with regular BVG public transport tickets (no “Kurztickets” are valid here though). Two of them just cross rivers, the Spree and the Dahme, while the ferry on Wannsee lake is definitely a full-fledged excursion destination. For persons who have BVG day tickets (or weekly or monthly ones), so-called ‘Berlin Welcome Cards’ or ‘Berlin Passes’ with the public transport option, those trips will not cost a dime, since they are included.

In the south-eastern part of Berlin, this ferry connects the lower end of Spreepark to the Wilhelmstrand quarter. Here, people live in cute little houses and huts. They lead quiet lives in this area of tiny streets. “It may not be beautiful down here, but quiet”, a lady says. The 50-year-old has always lived in this quarter. It is the place she knows and loves. To her, the Spree river and the ferry seem to be the center of the universe.

These days, she is disappointed, because the operator BVG might scrap this ferry line after 115 years of service. It has been taking people back and forth since 1906. In case they really get rid of it, the residents in the Wilhelmstrand quarter will have to walk all the way to the tram, and they would not be connected to the park on the opposite side anymore, at least not directly.

A little pub is located on the lady’s side of the river. Here, the residents recently organized their fight for the ferry which they definitely want to keep. There is no traffic light, no supermarket, no concert hall and no gas station. But they do have a pretty impressive cigarette vending machine in their cute part of Berlin.

Sweating joggers run back and forth on the path in Spreepark, across the river. Most of them wear large headphones, as if they wanted to get rid of the silence in this green area. Another two ladies jog by, just as the little ferry lands at the tiny pier. The captain, a lady, is very unfriendly. Maybe she is just having a bad day. Every trip across the river takes her about four minutes. Her ferry’s two stinking Diesel engines are always running. Either they press the boat to the pier or they propel the vessel to the other side.

But when there is no ice on the river, they use a boat powered by the sun, with electric engines. It makes this trip even more sustainable than two bowls of gluten-free muesli and a box of politically correct nutrition bars.

From the center of Berlin, getting to the S-Bahn station ‘Baumschulenweg‘ is easy. So is switching to bus line 170, which goes to the pier within two to three minutes.

This one will take the professional Berlin tourist with his or her Nikon camera, mineral water bottle, sun hat, alternative city guide book and Led Zeppelin t-shirt to the Grünau S-Bahn station located in Berlin’s ‘far east’. From there, just walk along Wassersportallee until you hit something big and wet. Those who do not want to waste their shoe soles on this side of the river can take the tram.

Ferry F-12 operates every 15 to 20 minutes. This Saturday, its captain behaved like the Chairman of the State Council. He complained to the author who had photographed and filmed the boat while it was coming in. His speech in front of all passengers was almost as good as the author’s counter speech. So, whenever this captain is on duty, the ‘Queen Elizabeth’ he thinks he is commanding becomes his private property. Nobody will take pictures of this tourist sensation. Period. But threatening him with a phone call to the State Security might shut him up.

After a 4-minute ride, a beautiful part of the posh Köpenick quarter appears on the horizon. Old, beautiful and expensive villas in even more beautiful gardens can be admired here, during a pleasant walk. Just don’t get run over by all the cyclists on the sidewalk. They are allowed to use it because of the tram tracks.

This ferry leaves from the pier at the Bismarck statue located close to the S-Bahn stop Wannsee, which it connects to Kladow, a picturesque quarter at the lake’s opposite side. Little restaurants welcome visitors there, right at the water.

In this case, the 4.4 kilometer trip (2.7 miles) takes about 20 minutes on the little ‘Wannsee’ ship. This ferry can carry up to 300 people and a billion bicycles. The captain, an old sea wolf with a grey beard, is a nice guy. He is the only captain out of three the author of these lines did not clash with. After 20 years of commanding and steering this boat, it is safe to say the guy is experienced.

Recently, he had two helpers. A Syrian guy and a Spaniard who loves to be called “el capitán“. It puts a bright smile on his face. Si, una sonrisa grande. Es buena gente. Taking this ferry trip shortly before sundown is great, especially on a clear day in February. The colors in the sky and the reflections on the water are simply out of this world. They look photoshopped, but they are actually not.

If this is not the most romantic thing of all times, what is? Even though nobody is allowed to stand out in the open, bow or aft, this ferry ride calls for millions of pictures and video sequences.

There are even more BVG ferries. The lines F-21 from Krampenburg to Schmöckwitz and the F23 from Müggelwerderweg to Rahnsdorf run on a seasonal basis, from April to October.